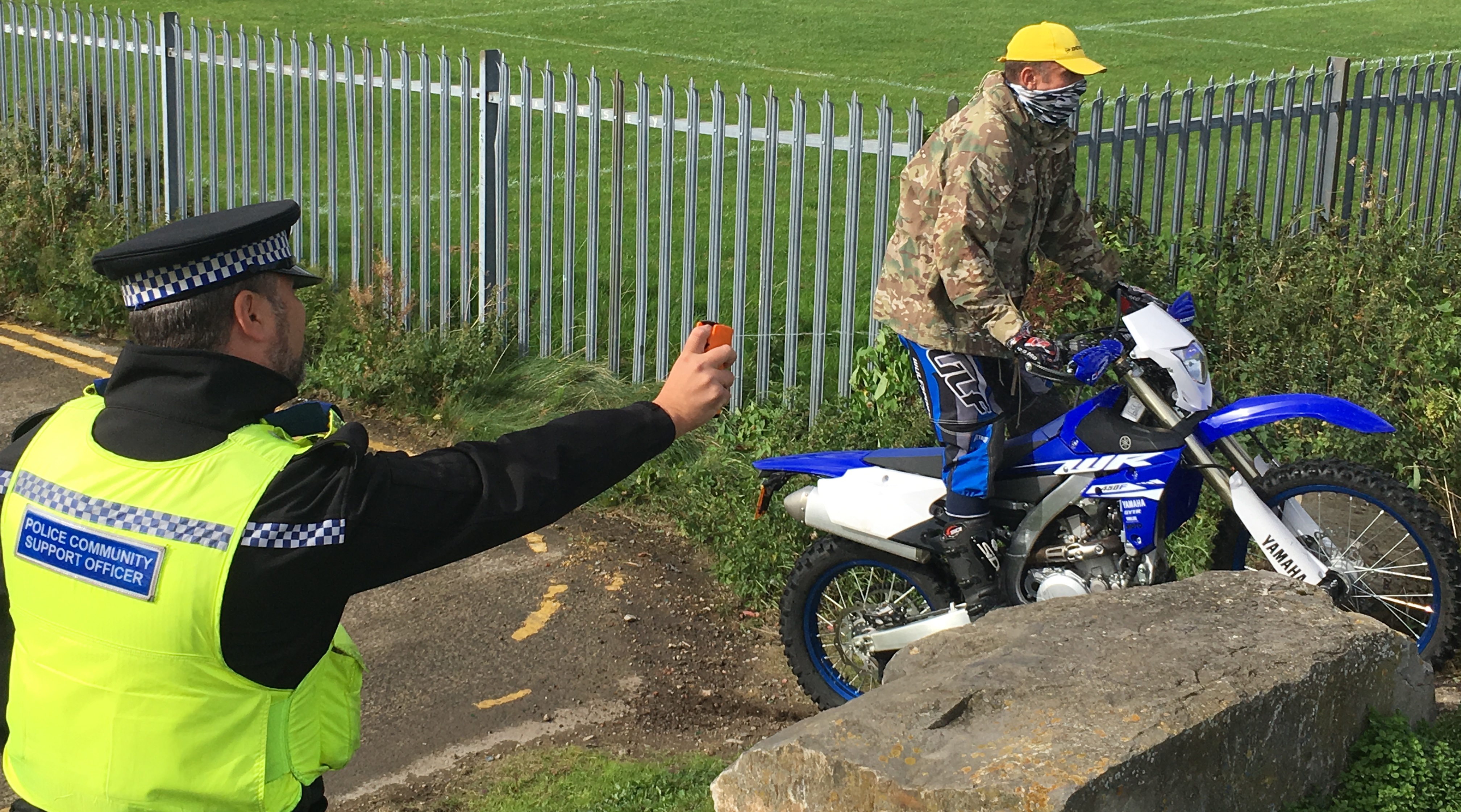 A community safety partnership in Newcastle is backing a police task-force set up to tackle motorcycle disorder in the North East – by funding a ground-breaking new DNA spray to tag offenders.

In October Northumbria Police revealed a specialist team had been set up to tackle anti-social behaviour and disorder linked to motorcycles.

Investigations had found that a large number of the motorcycles involved were stolen and linked to serious criminality including violence and drugs.

Dozens of people – including juveniles and adults – have been arrested by the team in the crackdown on the disorder.

And last week the task force seized a hoard of stolen property, weapons, drugs and fake number plates in a string of dawn raids.

Their work, that has taken place alongside partners on the Safe Newcastle board, has already led to significant reduction in reports of motorcycle disorder across Newcastle and Gateshead.

Safe Newcastle, which brings together Northumbria Police, Newcastle City Council, Tyne and Wear Fire and Rescue Service and health professionals, has now provided police with funding to utilise a specialist DNA spray to deal with the problem.

It will see police officers carry canisters containing an invisible water-based UV solution which can spray riders’ skin, clothes or bikes with a uniquely-coded dye.

This can then provide forensic evidence to link individuals or items to a specific crime.

Safe Newcastle worked closely with police to invest in the product after a pilot scheme across Sunderland and South Tyneside led to a 70 per cent fall in reports.

Cllr Habib Rahman, chair of Safe Newcastle and Newcastle City Council cabinet member for Communities, said: "This is a fantastic piece of kit which has proven to be effective in combating a problem area which is a real concern for residents of the city.

“It is pleasing to see the Safe Newcastle partnership in action working to tackle to issues that matter and we are proud to be able to support Northumbria Police in keeping our communities safe.”

Detective Inspector Mal Stratton, who oversees the work of the team, said it is yet another tactic to be used to keep the local community safe.

He said: "We set up this team because we knew there was serious criminality linked to what, on the face of it, appeared to be anti-social behaviour and nuisance motorcycle activity.

“There may be some who think these are just bored teenagers who have nowhere to ride their motorcycles but that is not the case.

“Over the past few weeks we have seized significant quantities of drugs, a huge amount of weapons and a host of stolen motorcycles.

"Our task force have been able to do that because they have used a host of different tactics and this DNA spray is just another tool to their belt.

"It has a proven track record of success in South Tyneside it has reduced incidents by more than two thirds and we are thankful to Safe Newcastle for providing the funding for it.

"We will use it in our plans to target serious criminals but we will also look at preventative tactics, that includes identifying diversionary programmes for young people.

“We want you to report issues with motorcycle disorder directly to our task force because it is the public who are eyes and ears in the community.

"If it safe to do so then take pictures, take videos and send it to our detectives so we can help make your community a better place to live."

Inspector Phil Baker covers South Shields, where the pilot was introduced in September, and said the new equipment has had a "significant impact" on offenders in the area.

He said: "We know this is a problem across the Force area but there were areas in South Shields where we had a number of reports of anti-social behaviour linked to off-road bikes. As a result, we were keen to work with local authorities to find a solution.

"This spray had been introduced elsewhere across the country and we saw it as an innovative way to put those responsible for the disorder before the courts.

"Often we know those involved in offending but trying to secure the evidence to bring forward a successful conviction can be difficult. This DNA spray will greatly assist in the regard.

"It has been a huge success in our area but we are not complacent and will continue be proactive. I hope that the task force can replicate the successes we have seen in our area."

Safe Newcastle is the community safety partnership for Newcastle. Its vision is to create a safe Newcastle by tackling crime, alcohol, drugs, anti-social behaviour and their impact. By working together its members aim to develop effective, sustainable solutions to local concerns, improve confidence and build stronger communities.

Northumbria Police's motorcycle task force cover Newcastle and Gateshead and are made up of a number of experienced and specialist officers based at Etal Lane Police Station.

They review every incident where a motorcycle has been used in an anti-social manner and try to establish any patterns of behaviour.

The team will then look to secure warrants on addresses linked to the anti-social behaviour and that has already resulted in a number of significant arrests.