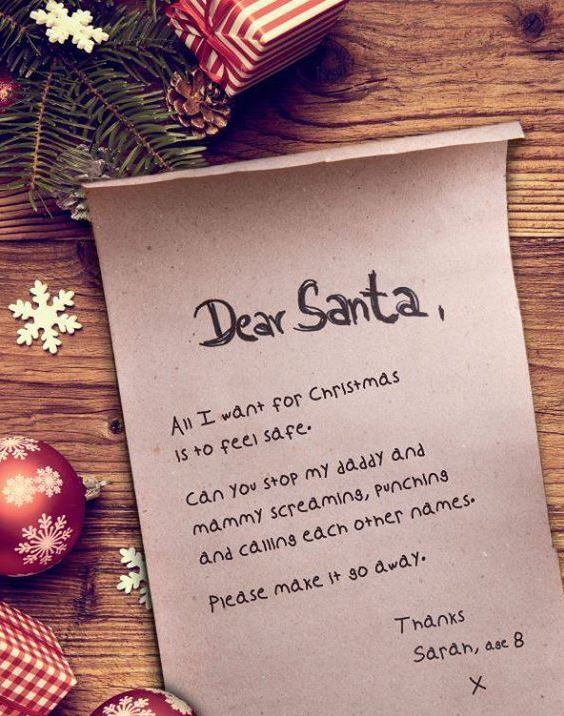 ‘Twas the night before Christmas and all through the house, were raised voices and violence – and a child as frightened as a mouse…

That is the harsh reality for some children at Christmas as is being highlighted in a moving campaign launched by Police and Crime Commissioner, Dame Vera Baird QC and Northumbria Police today (Friday, December 14).

The campaign imagery features a child’s letter to Santa. But instead of the usual request for teddies and toys – the child has one wish – an end to the upsetting abuse they witness at home.

The letter reads ‘Dear Santa, All I want for Christmas is to feel safe. Can you stop my daddy and mammy screaming, punching and calling each other names? Please make it stop. Thanks, Sarah, age 8.’

One in seven (14.2 per cent) children and young people under the age of 18 will have lived with domestic violence at some point in their childhood. Recent figures from the MOJ suggest that at least two thirds of domestic abuse victims are women and that 9 in every 10 defendants in domestic abuse prosecutions are men.

It is hoped the campaign will increase awareness of how domestic abuse affects children’s wellbeing and will encourage those suffering to seek help.

Domestic abuse is any type of controlling, bullying, threatening or violent behaviour within a relationship or between family members or carers. But it isn’t just physical violence – domestic abuse includes emotional, physical, sexual, financial or psychological abuse.

Northumbria Police and Crime Commissioner, Dame Vera Baird QC, said: “It’s said that some of the biggest victims of domestic violence are the smallest and this is very true. Children are far too often the forgotten victims of domestic abuse in the home and we cannot let it be an unspoken problem and that’s why children are at the heart of this year’s campaign.”

She added: “We need to protect these children and work together to address the fear and the trauma that could affect them for years to come"

Northumbria Police Chief Constable Winton Keenen said: “At what should be one of the most joyous times of the year, the extremely sad reality is that for many domestic abuse victims and their children, the festive period can be one they fear and dread. If this is you - please don’t suffer in silence. I want all victims to know we are here for you and our trained officers want to help you and your children.”

For more information about domestic abuse visit www.northumbria.police.uk. For independent and confidential advice call Victims First Northumbria on 0800 011 3116. For help to change your behaviour, call Respect on 0808 802 4040. In an emergency always call 999.