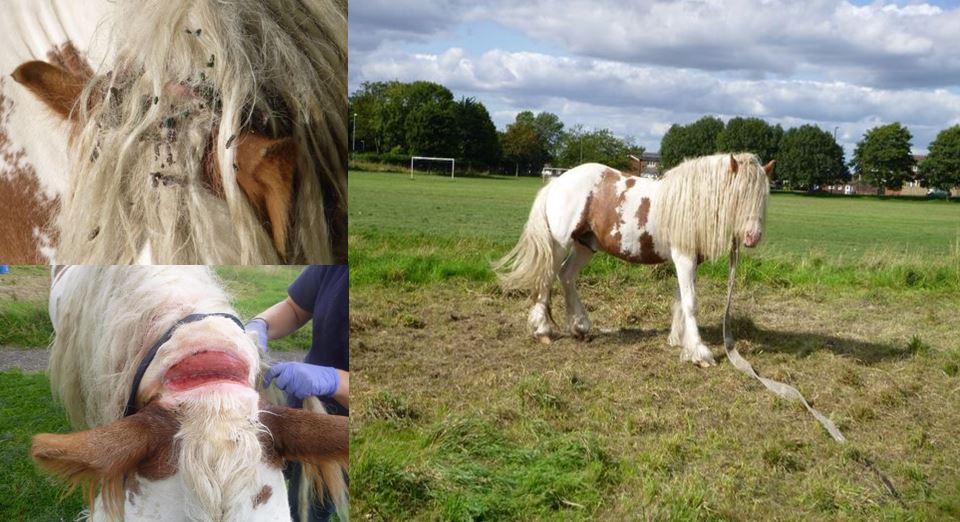 The RSPCA were also given permission to rehome Raspy after Glenn Foot, 31, was convicted for three offences

A man has been banned from owning any equine animals until 2024 after his horse was found with a maggot-infested injury.

Glenn Foot, 31, of Marley Crescent, Sunderland, has been convicted after his horse, Raspy, suffered a severe head-collar injury.

Police and RSPCA officers were alerted to the animal’s condition in August last year after a member of the public saw it tethered in a field in Witherwack.

An investigation was subsequently launched and last month (January) Foot was convicted of three offences under the Animal Welfare Act 2006.

Yesterday (Wednesday), he was sentenced at South Tyneside Magistrates’ Court after causing unnecessary suffering to an animal, failing to meet the horse’s needs and obstructing an officer.

Foot was disqualified from owning, keeping or transporting any equine animal for five years, and the RSPCA were also given permission to rehome Raspy.

PC Peter Baker, of Northumbria Police, said: “We are a nation of animal lovers so it is never nice to deal with cases like this that involves unnecessary suffering and pain.

“The horse suffered a deep cut from his head collar, but when confronted by police and the RSPCA, the owner refused to cooperate and would not disclose the location of the injured animal.

“I am pleased that Glenn Foot had his day in court, and I hope this sends a message to owners that they are responsible for looking after their animals and ensuring they are protected from pain, suffering, injury and disease.

“Anybody who fails to ensure an animal’s welfare needs are adequately met could face criminal action. We would always ask anybody who witnesses cruelty or an animal in distress to contact the RSPCA direct or call 101.”

Officers and the RSPCA attended a grassy area off Wembley Road, Sunderland, on August 29 last year after concerns were raised for a horse, which was described by the caller to have a “tar-like substance” on his head.

Attempts were made to seize the injured horse, which was surrounded by flies, but its owner Foot refused to let officers take the animal and made off.

Subsequent efforts to find the horse proved unsuccessful. However, the animal has since been located and checked over by a vet.

RSPCA Inspector Rowena Proctor was among those who witnessed the severity of the horse’s condition.

She said: “When I approached Raspy, I could see hundreds of flies surrounding him and was very concerned.

“There was a horrendous smell of infection. I could see the tar-like substance that had been mentioned and it appeared to be dried blood. I thought immediately that the horse may have an embedded head collar.”

RSPCA Inspector Proctor called a vet who discovered Raspy was wearing not one but two head-collars which were embedded into his skin.

She continued: “The wound appeared a couple of inches deep, it looked like the horse had been sliced. It was absolutely shocking.

“The smell coming from the collars was horrendous and I quickly noticed hundreds of fly eggs, alongside live maggots, crawling around inside them.”

Yesterday, Foot was banned from owning, keeping or transporting any equine animal until 2023.

In addition, he received an 18-month community order with 300 hours of unpaid work and was ordered to pay £485 in costs.