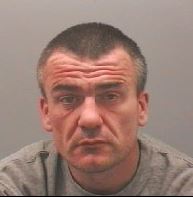 A prolific thief has been convicted of stealing from unlocked cars - after being caught red handed thanks to vigilance of a eagle-eyed resident.

At about 4.30am on Friday police received a call reporting that a man was acting suspiciously on Wynbury Road in Low Fell, Gateshead.

The caller reported a man he did not know had been trying a number of car doors on the street in a bid to commit a theft.

He stayed on the phone and described how the man was sitting inside a neighbour's car and rifling through its contents.

Officers were immediately dispatched to the scene where they caught the thief red handed.

Gordon Simpson, 42, was found inside the vehicle and was also carrying a carrier bag full of stolen goods.

He was arrested and later charged with two counts of theft from motor vehicles.

Simpson, of Newbold Court, Gateshead, appeared before Newcastle Magistrates Court on Saturday where he admitted the charges against him.

He was released on bail and will now be sentenced by magistrates at his next appearance at court on June 19.

Neighbourhood Inspector Mick Robson has now praised the vigilance of the resident who reported the incident to police.

He said: "Gordon Simpson is a prolific thief who has numerous convictions to his name and will take any opportunity to steal from other people.

"He is a person who has no regard for the impact his offending will have on his victims and despite his warnings he continues to live a life of crime.

"Simpson has spent time behind bars in the past and could be jailed again after being caught red handed by police on Friday evening.

"I want to take this opportunity to thank the resident who contacted police after noticing the suspicious activity on his street.

"He picked up the phone and contacted police and his vigilance allowed us to make a quick arrest and return any stolen property to their rightful owner.

"The local community are our greatest asset in tackling crime and putting offenders before the court.

"You are our eyes and ears on the ground and these types of results show what a great team we can be."

Anyone who notices any suspicious behaviour can also contact police on 101 or report it online at the Northumbria Police website.

If a crime is in action, or if a person or property is at risk, then the public are always encouraged to dial 999.