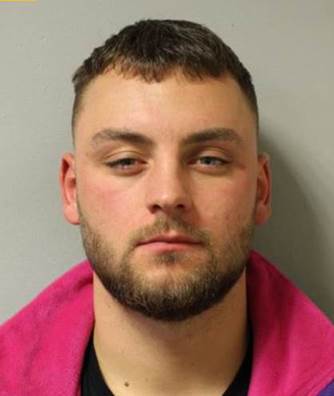 Scott Brown, 27, carried out the offence during the Magpies' 3-2 win at West Ham at the London Stadium earlier this month

A football lout who ripped out a seat and tried to throw it at rival supporter has been handed a banning order - after the missile hit one of his own fans.

Earlier this month Scott Brown travelled to London to watch Newcastle United take on West Ham United at the London Stadium in the Premier League clash.

He was sat in the away end to cheer on his team and a court heard how the 27-year-old had been drinking heavily in the build up to the match on November 2.

Newcastle United raced into an early two goal lead and amid the celebrations Brown ripped off his seat and hurled it towards the West Ham fans.

However, he failed to reach the rival supporters and instead struck a 26-year-old woman who was also sat in the away end, leaving her with a nasty cut to the head.

Brown, of Oakfield Park, Prudhoe, was arrested at the stadium by the Metropolitan Police before being charged with throwing a missile, common assault and possession of a Class A drug.

Now he has been handed a three year football banning order and a four month suspended sentence at Thames Magistrates' Court in London last Tuesday (November 19).

Chief Superintendent Sarah Pitt, who oversees football policing in Northumbria Police, said the sentence should send a strong message to any fans who don't control their emotions.

She said: "The North East is home to some of the most passionate football supporters in the entire country and thousands of people travel to watch them in action every single week.

"They very rarely get involved in any disorder and we are proud to be able to travel with supporters of both Newcastle and Sunderland to away matches across the country.

"We know football can stir emotions and many of our officers are fans as well so we understand that things can boil over.

"However, there is absolutely no excuse for behaviour like that demonstrated by Scott Brown at the West Ham game and I welcome this sentence.

"His reckless and stupid actions have led to a fellow Newcastle United fan being injured and he is lucky that her injuries weren't more serious.

"Often being banned from being able to follow your team is worse than any fine or community service and I hope he learns from his mistake.

"I welcome the strong sentence handed down by the judge and I hope that it sends a message to any fans who fail to control their emotions."

As well as the banning order and suspended sentence, Brown was ordered to carry out 150 hours of unpaid work and charged nearly £1,000 in compensation and court costs.