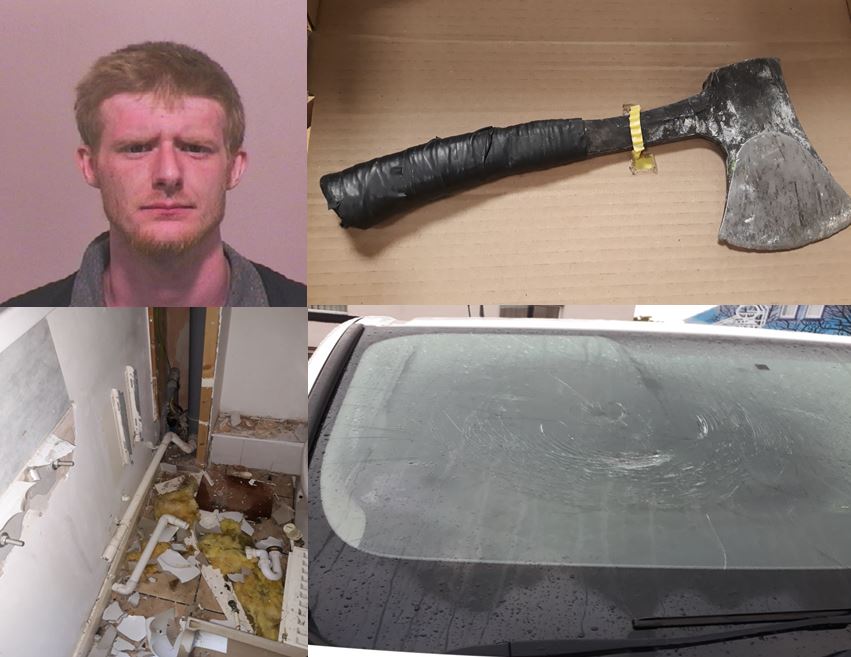 An axe-wielding burglar who staged a three-hour rooftop stand-off with police has been jailed.

Raider Edwin Loughlin broke into a home on Caroline Street, Hetton-le-Hole, on August 27 and ripped pipework and radiators from the walls.

After being alerted about the intruder, officers swooped on the street but Loughlin was not ready to give himself up and scaled the roof of the building.

The 23-year-old then threw bricks, roof tiles and debris down at officers and a police dog van on the street below, causing the windscreen to shatter.

Officers required shields to protect themselves from the missiles as Loughlin, armed with an axe, vowed to attack police in a final show of defiance.

But after a three-hour stand-off, he came down and was arrested and later charged with burglary, possession of an axe, damaging property and affray.

On Tuesday (October 8), Loughin, of Caroline Street, Hetton-le-Hole, was  jailed for 21 months after pleading guilty to all offences.

Detective Constable Andy Thompson, of Northumbria Police, said: “Edwin Loughlin posed a serious danger to himself, police officers and the local community on the afternoon in question.

“He showed a total disregard for the law as he broke into a property that was ready to be rented out, causing more than £4,800 of damage as he hacked at the pipework, radiators and plastering.

“With the net tightening as police arrived, Loughlin then ran across rooftops and hurled bricks, tiles and debris at the officers below while also threatening to use the axe as a weapon against those looking to detain him.

“During his hours of frenzy, he smashed the windscreen of a police dog van and endangered the wider public, with police left with little choice but to set up cordon to protect the local community.

“Loughlin’s selfish behaviour was a drain on emergency resources and resulted in significant damage to the house, a police vehicle and two cars which belonged to residents. This kind of behaviour will not be tolerated and he will now spend a considerable spell behind bars.”

The court heard Loughlin threw more than 50 missiles at police during the incident and inconvenienced over 100 members of the public who were temporarily displaced from their home or work while the cordon was in place.

He now begins a stretch in prison.