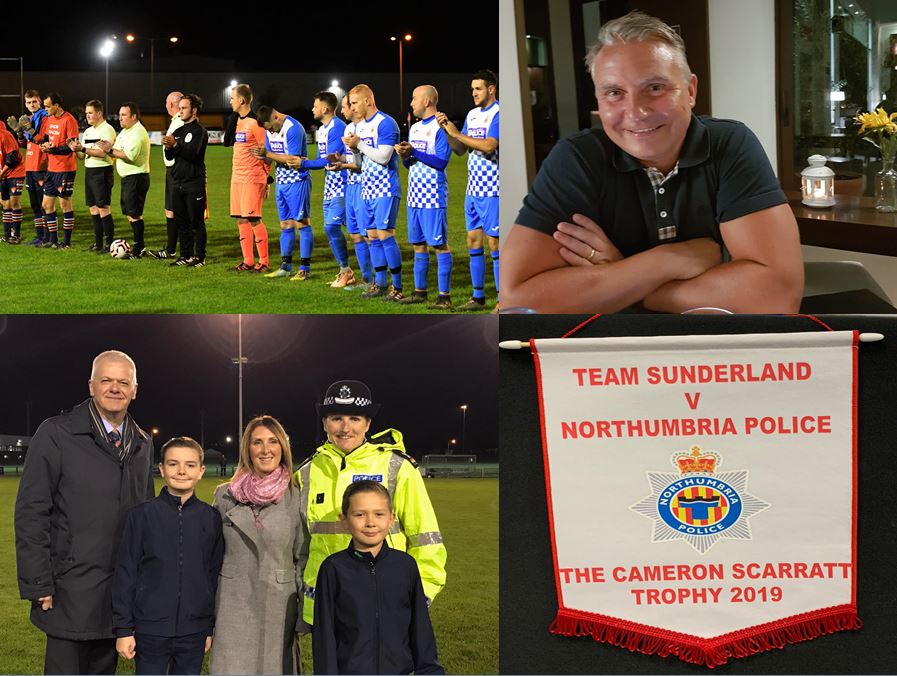 The charity football match raised funds for four charities including Macmillan Cancer Support in memory of Cameron, who died in July this year

A football match held in memory of a much-loved detective who recently passed away has raised more than £700 for charity.

Northumbria Police held the inaugural match against the University of Sunderland on Monday in memory of the late Detective Constable Cameron Scarratt, who died on July 3 at the age of 44.

Cameron spent 20 years with the Force and served in the Priority and Organised Crime Team before his short battle with cancer.

To ensure his legacy lived on, his friends from the Force’s men’s football team staged a special fixture against the university where Cameron used to study and raised hundreds of pounds for charity as the community came together.

The Force’s XI ran out 5-4 winners at the Nissan Sports & Leisure Complex in front of a number of high-profile guests including Sunderland legend Gary Bennett, Southern Area Commander Chief Superintendent Sarah Pitt and Vice-Chancellor of the University of Sunderland, Sir David Bell.

The free event – which included a raffle and other games – raised a total of £734 which will be shared between Macmillan Cancer Support, Mind North East, the Blue Light Foundation and Show Racism the Red Card.

Cameron’s wife, Lisa, and sons, Charlie and Harvey, were in attendance and presented The Cameron Scarratt Trophy to the victors after the final whistle.

Superintendent Brad Howe, of Northumbria Police, said: “It was a very special evening and one that will live long in the memory.

“Cameron was a much-loved man and a well-respected colleague, and I’m sure he would have been blown away by all of this.

“Along with the university, we wanted to dedicate the game in Cameron’s memory and I would like to thank Lisa and his children for coming along on the night, along with local organisations and the entire community who showed their support and helped raise a fantastic amount for very worthy causes."

Sir David Bell, vice-chancellor at the University of Sunderland, said he hopes the match can become an annual showpiece following its success this week.

"A very exciting and sporting football match between the University of Sunderland and Northumbria Police was an excellent way to celebrate the life of Cameron Scarratt, one of our graduates and a police officer, who sadly died this year.

"It was great to have Cameron's family present and, like me, they were delighted that the University was able to participate in such an event.

"It would be great to have the teams compete for The Cameron Scarratt Trophy on an annual basis. That way, Northumbria Police can defend the trophy and the University can seek to avenge this year's very narrow 5-4 defeat."