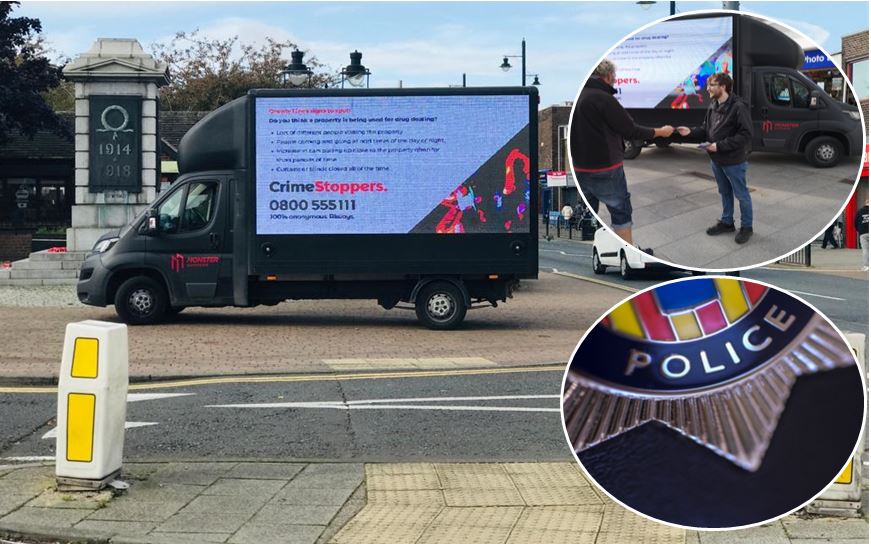 County Lines refers to gangs and organised criminal networks that expand their illicit operations from big-city bases to smaller cities and towns across Britain.

The drug-dealing networks are usually controlled by a person using a single telephone number or ‘deal-line’ to distribute illegal drugs into suburban, rural and coastal areas via ‘runners’.

This type of criminality often sees the exploitation of vulnerable people, including children and those with existing addition problems, to move and store drugs and money.

Yesterday (Wednesday) in a bid to raise awareness of County Lines, an Ad-van drove throughout Newcastle and Sunderland displaying campaign posters and advising ways for the public to report incidents via the police or 100% anonymously via the charity Crimestoppers.

Leaflets were handed out and advice given to the community in a bid to empower members of the public to help spot the signs of potential victims as early as possible.

Detective Inspector Kirsten Dent, County Lines coordinator at the North East Regional Special Operations Unit (NERSOU), said the public has a vital role to play in helping to tackle and prevent this type of criminality from affecting our region.

“County Lines is a relatively new model of drug dealing and this campaign is all about helping to educate the public about what it is, how to spot the signs and where to report unusual behaviour,” Det Insp Dent said.

“Throughout this week, the Ad-van has travelled across Northumbria, Durham and Cleveland’s Force area, with officers on hand to engage with members of the public and talk about this type of criminality.

“This crime is often associated with other serious crimes such as sexual exploitation, human trafficking and money laundering, so it’s crucial we work together through NERSOU and with our partners to improve our intelligence picture, take robust action against suspects and safeguard vulnerable people.

“However, the public are our eyes and ears and this campaign is all about empowering our communities to spot signs of County Lines criminality. If you suspect something is not quite right, please get in touch and talk to us.

“We want to send a clear message to those involved in County Lines criminality that this is totally unacceptable and will not be tolerated here in the North East.”

Northumbria Police and Crime Commissioner, Kim McGuinness, said: “County Lines relies on the exploitation of vulnerable people, particularly young people and those experiencing poverty or hardship. We absolutely have to safeguard those people.

"This is a growing concern which is pleasing to see Northumbria Police focusing on.

"In order to tackle violent crime and crime that is disruptive for our communities, I’m establishing a Violence Reduction Unit. This will focus on getting to young people as they are showing signs of vulnerability and exposure to criminal activity.

"This will work hand in hand with neighbourhood policing so we can identify those at risk and those pushing drugs and stop County Lines in its tracks.”

Ruth McNee, Regional Manager for the North East at the charity Crimestoppers, added: “County Lines is a significant and growing problem and we need your help to protect the people and communities who are harmed by these gangs.

"Children and young people are being exploited and many are too troubled and young to realise what is happening. Being forced into drug running can leave them feeling they have no way out or struggling to escape the daily harm they have to endure.

“Crimestoppers charity believes everyone has the right to feel safe from crime. We need your help and support to protect young people from exploitation. If you are unwilling to speak to the authorities directly, you can contact us.

“We have always kept our promise of 100% anonymity to everyone who has contacted us. We never ask for your name. We won’t judge. We listen to what you know. Once you’ve hung up the phone or click send on our online form, you’re done. No one will ever know you contacted us.

"Your information could make a big difference in preventing harm and protecting the people and places you care about.”

Anyone with information on suspected County Lines activity is asked to call Northumbria Police via 101 or alternatively contact Crimestoppers charity 100% anonymously on 0800 555 111 or visit Crimestoppers-uk.org.