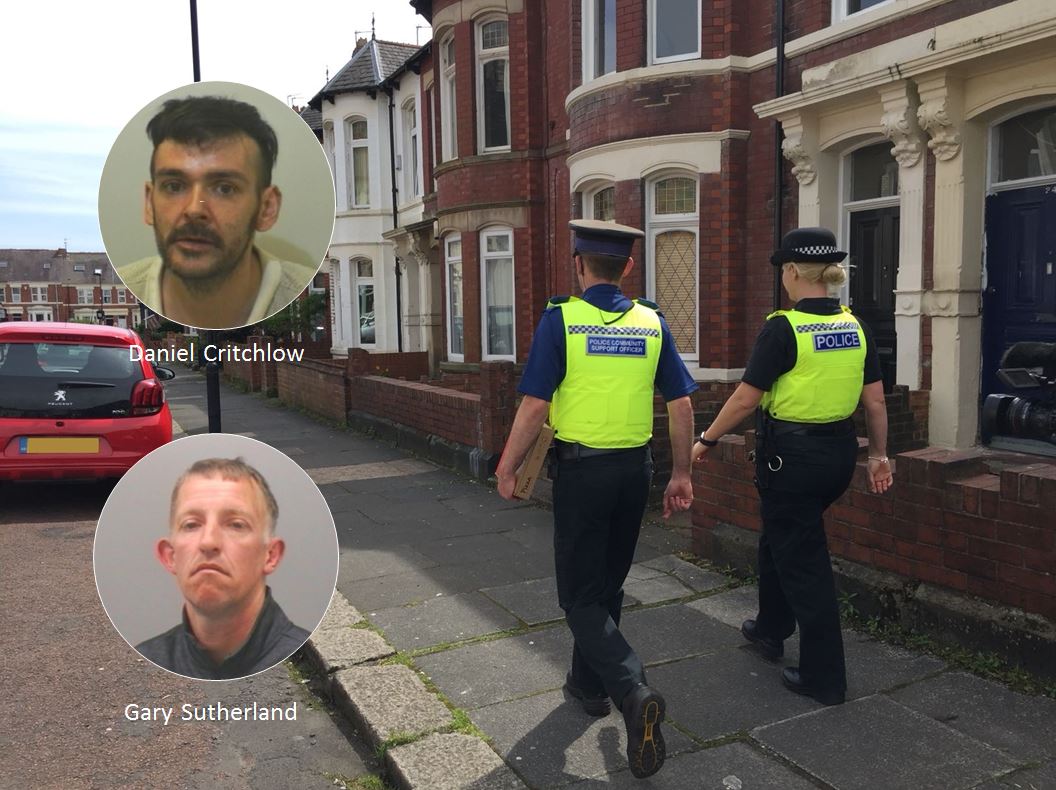 Two thieves who were snared during a burglary crackdown in Newcastle’s east end are now behind bars.

Detectives launched the operation in June following a spike in break-ins, car crime and bicycle thefts across Heaton and Jesmond.

Seven suspects were arrested as officers carried out high visibility patrols in areas targeted by thieves and reviewed hundreds of ours of CCTV. In the week that followed the operation, incidents dropped by an incredible 60 per cent.

Four of the thieves were charged by neighbourhood officers at Byker Police Station and the Central Burglary Team while a teenager was handed a conditional caution.

One of the men charged is currently remanded in prison awaiting trial, while two men have now been convicted of burglary offences at Newcastle Crown Court.

Gary Sutherland, 44, of St George’s Terrace, Jesmond, was jailed for two years and four months on July 15 after admitting burgling a house on the same street he lived. He made off empty-handed but was identified by police through CCTV enquiries.

Daniel Critchlow, 36, of Jesmond Vale Terrace, Heaton, was jailed for 18 months on September 6 after pleading guilty to burglary, theft from a motor vehicle and a fraud offence.

That followed a burglary on Newton Road where a number of belongings were stolen as well as the victim's car.

Officers were able to track the use of a bank card stolen by the thieves and Critchlow was later identified through CCTV before being arrested while still in possession of property stolen from the address.

A third man was handed a community order after admitting stealing from an unlocked car.

Northumbria Police's Neighbourhood Inspector, Rob Stowers, said he hoped the 60 per cent reduction in incidents as a result of the crackdown would reassure residents in his patch.

He said: "Burglary is a very intrusive crime that can leave innocent members of their public feeling unsafe in their own home.

"That is simply not acceptable and targeting burglars and opportunistic thieves will always be a big priority for neighbourhood officers.

"I hope that this particular operation can reassure residents in Heaton and Jesmond that we won't tolerate this type of criminality.

"Two men are now behind bars because of a lot of hard work and the fact that offences reduced by 60 per cent showed the impact of our enforcement action.

"We want residents in our area to feel safe and we would encourage the public to report suspicious activity so we can take further action against offenders."

Many of those properties targeted by the thieves were occupied by students and last week the beginning of the new university term saw thousands of students return to the city.

Inspector Stowers said there was a link between increases in burglary and the start of the new university term and today called on students to be vigilant.

He said: "We have a thriving student population in the east end of Newcastle and they are a welcome addition to our community.

"However we do see a connection between an increase in burglaries and the start of a new university term so we would ask students to be vigilant.

"The majority of thieves are opportunistic and they will look to gain entry to properties or vehicles that have been left unlocked.

"We would ask the public to always check if your car is locked, keep doors and windows locked when you are not home and not keep keys or valuables on display in your porch or hallway.

"By taking these steps you could drastically reduce the chance of you falling victim to thieves and having your property stolen by a stranger.

"Officers will continue to carry out high visibility patrols to deter offenders and if anyone has any concerns we would ask them to approach us and have a chat."

If you notice any suspicious behaviour in your neighbourhood, or if you have information about a burglar, then contact police on 101 or dial 999 if a crime is in action.

You can find advice about how to deter burglars from your home on the 'Information and Advice' section of the Northumbria Police website.