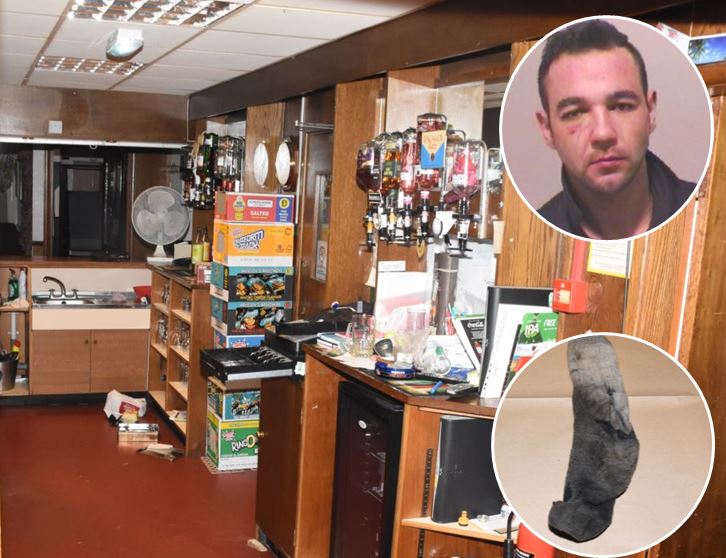 A blundering burglar who left a DNA-smeared sock at the scene of his own crime has been convicted.

Karl Hogg, 31, broke into the Dubmire Royal British Legion Social Club in Fencehouses on the morning of August 15 in a “sickening” raid.

After removing tiles from the roof, the brazen bandit smashed through the ceiling before stealing alcohol and money from charity coffers, as well as causing substantial damage to the building.

But Hogg – who had left empty bottles of spirits at the premises – inadvertently left a sock at the scene which later came back as a forensic match.

He is due to be sentenced next month (October).

Detective Constable Alex Hadwin, of Northumbria Police, said: “Burglary is a disgraceful crime that can affect victims and the community for a long time, but for somebody to steal from a charity which supports Armed Forces members, veterans and their families is deplorable.

“Charities such as this rely on the good-will and support of volunteers and the community, who work hard all year-round in various fundraising ventures.

“Hogg showed a total disregard for the charity and the local community as a whole as he carried out his crime, emptying fundraising buckets and stealing alcohol for his own purely selfish gain.

“However, his deception was laid bare after a sock he'd used in the burglary smeared in his DNA was found at the scene, along with alcohol bottles on the roof which had been consumed.

“He will now have to face the consequences of his actions when he is sentenced next month.

“I would like to reassure the community that we are committed to taking burglars off the streets and bring those who look to inflict misery on others to justice.”

Police were called to the social club shortly after 4am on August 15 after the premises’ steward was alerted that the alarm was going off.

When officers attended, they found damage to the roof of the premises – along with a number of discarded items including empty alcohol bottles, a small amount of cash and a sock.

Money had been stolen from a games machine and charity collection boxes in aid of the Legion’s Poppy Appeal and the Integrated Critical Care Unit at Sunderland Royal Hospital.

CCTV footage showed Hogg skulking inside the club on the morning in question, while the sock later came back as a DNA match to the main suspect following forensic analysis. He was subsequently arrested and charged with burglary.

In a victim impact statement, the social club’s stewardess revealed the damage to the premises and value of items stolen came to a total of more than £6,000.

“The burglary and in particular the theft of charity amounts is sickening,” she said.

“The crime has upset our members and caused our staff an inconvenience. This is a family club and I’m sick that we have been targeted in such a way.”

Hogg is due to appear at Newcastle Crown Court for sentencing on October 4.