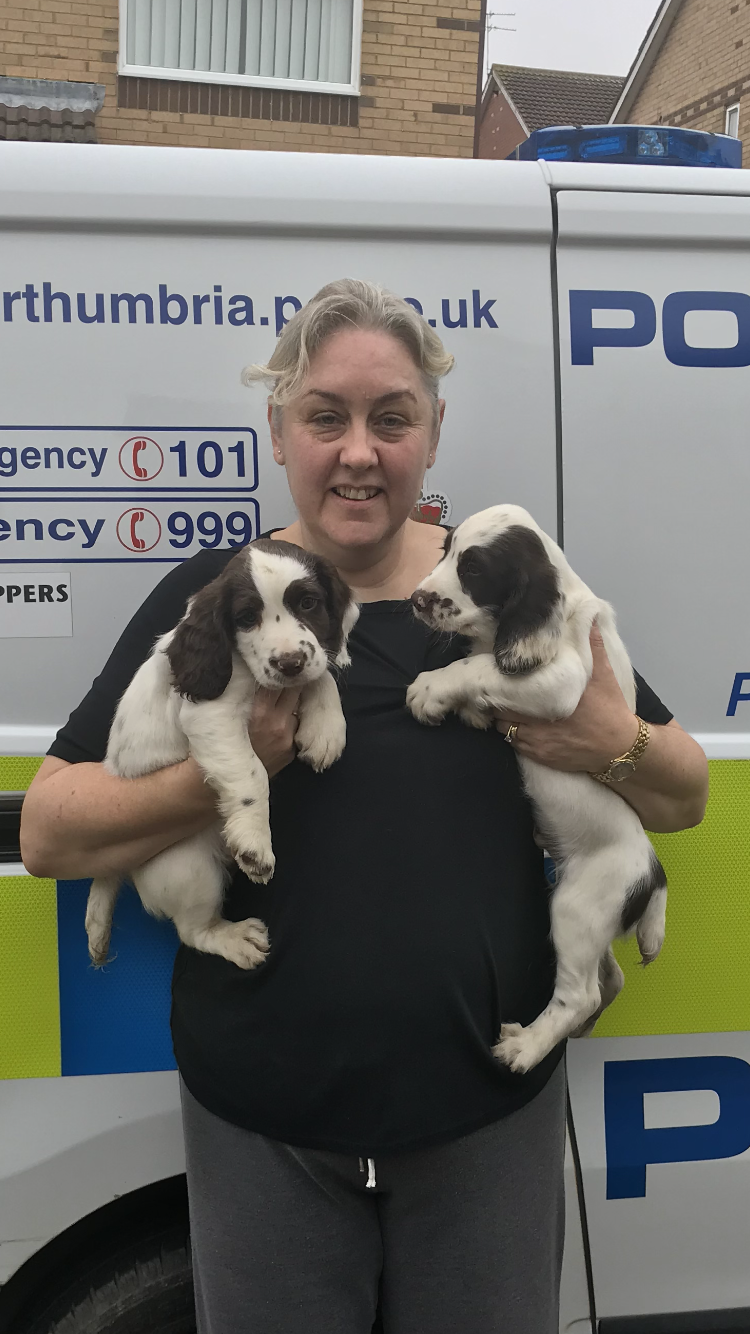 One of the newest recruits to Northumbria Police’s Dog Section has a lot to live up to – after being given the name CID.

The eight-week-old Springer Spaniel has been given the name, which is pronounced Sid, after being donated to the Force by one of their own detectives.

Detective Constable Tracy Kirk has worked in the Force for nearly 30 years and helped to put some of the region’s worst criminals behind bars.

She currently works in the Force’s Safeguarding Department but is due to retire next year and wanted to give something back to the Force.

Tracy’s gun dog Jessie was set to retire herself and Tracy decided to breed her so they could get a new working dog to replace her.

She fell pregnant and in July gave birth to a litter of nine puppies so Tracy decided she would donate one of them to Northumbria Police’s Dog Section.

He was named Cid in homage to her career as a detective and once he completes his training he will join the ranks as a specialist sniffer dog.

Sergeant Julie Neve, of Northumbria’s Dog Section, thanked Tracy for the donation and wished Cid all the best in his new career.

She said: “Tracy provided this puppy to the Force for free which was really generous of her and exciting for the Dog Section.

“We are always on the look-out for suitable puppies and Cid has all the traits we look for when it comes to recruiting a detection dog.

“When he grows up we hope that he will be a valuable asset in the search for drugs, weapons and money.

“With the name Cid he will have a lot to live up to but we have high expectations!”

The Force has also purchased one of Cid’s siblings off Tracy and the pup will also start a career as a K9 in the coming weeks.

Cid’s brother was given the name Tracker – which was a nickname Tracy had been given by colleagues thanks to her excellent detective work.

She said: “It has been a real privilege to work as a detective in Northumbria Police and providing them with a new dog is a way I could leave a legacy.

“It does make me proud that two of the latest litter have joined the Force and there is no doubt in my mind that they will do me proud.

“At the very least, I hope they act as a reminder of me once I do retire next year.”

Both puppies will now be assigned to a handler who will look after them until they are old enough to start their police training.

The rest of Jessie’s litter have also gone on to new homes with one pup joining the Queen Alexandra Royal Army nursing Corp as a rehabilitation dog.

You can follow the progress of the new puppies by following the Northumbria Police Dog Section on Twitter at @npdogsection.