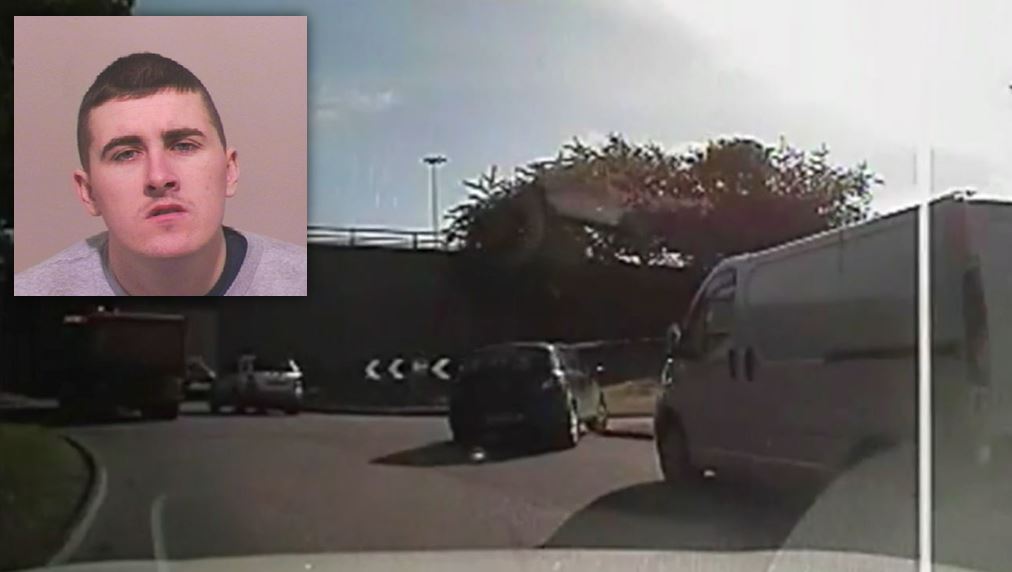 Uninsured driver Lewis Nesbitt, 25, led officers on a pursuit before abandoning his car - but was soon arrested after he was spotted at a bus stop

A dangerous motorist who drove the wrong way around a roundabout in a desperate bid to escape police has been jailed.

Lewis Nesbitt endangered the lives of other road users as he tore down residential streets on the morning of September 5 last year during a high-speed pursuit.

The reckless driver reached speeds of up to 70mph on narrow roads and skipped red lights, before driving the wrong way down a dual carriageway and a roundabout towards oncoming traffic.

But the uninsured 25-year-old was soon caught as police found him standing at a bus stop – shortly after he had abandoned his Vauxhall Corsa on South View Terrace in Houghton-le-Spring.

He was subsequently arrested and charged with a string of motoring offences including dangerous driving, driving without a licence and no insurance.

He was back in the dock on Friday (February 28) where he was jailed for 20 months and handed a three-year driving ban.

PC Steven Hackett, of Northumbria Police’s motor patrols department, said Nesbitt’s erratic behaviour behind the wheel could easily have led to serious injury or a fatality.

He said: “Nesbitt endangered the lives of other road users as he selfishly drove down residential streets at excess speeds in a desperate bid to get away from police.

“He then inexcusably drove the wrong way around a roundabout and dual carriageway, colliding with one vehicle and narrowly avoiding a head-on collision.

“After abandoning his car and fleeing on foot, Nesbitt hoped that he would be able to blend in with the crowd – but officers knew his identity and spotted him standing sheepishly at a bus stop. He was swiftly arrested.

“I am pleased that Nesbitt is now behind bars and the seriousness of his actions have been recognised. He clearly cannot be trusted to adhere to the laws of the road and has proven himself to be a real danger to others when behind the wheel of a car.”

Upon arrest, Nesbitt refused to cooperate with police and did not answer any questions put to him.

But with the weight of evidence against him overwhelming, last month he pleaded guilty at court to five motoring offences – dangerous driving, no insurance, driving without a licence, failure to stop and failure to provide a specimen.

He now begins a stretch behind bars and was banned from the roads until 2023.