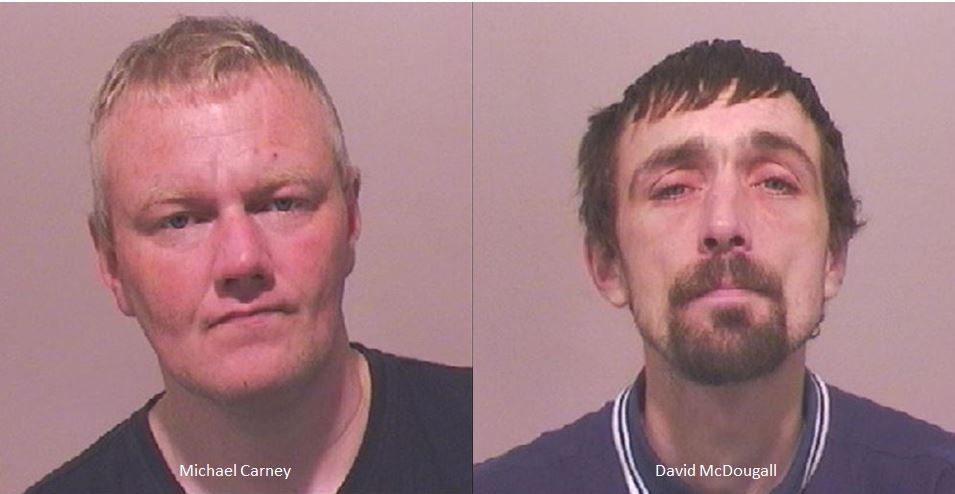 Shameless pair jailed after raiding Greggs in £4,000 burglary - and they even grabbed a fizzy drink on the way out

The defendants were both sentenced to a stretch behind bars this week following the break-in on Bede Industrial Estate, Jarrow

Two shameless criminals stole a four-figure sum while raiding a Greggs bakery – and even grabbed a fizzy drink on the way out.

Now Michael Carney, 39, and David McDougall, 38, are both behind bars after being convicted of burgling the premises on Bede Industrial Estate, Jarrow, in May 2018.

Carney, who was the boyfriend of an employee who worked at the store, helped himself to the keys and a fob from the woman’s handbag before he and McDougall carried out the brazen break-in.

The pair snatched nearly £4,000 from the safe and were seen on CCTV bundling the stolen loot into a rucksack.

And the raiders even had the audacity to grab a fizzy drink on the way out after their criminal actions proved thirsty work.

Carney, of Belgrave Terrace, South Shields, and McDougall, of Beach Road, South Shields, were arrested by police and pleaded guilty to the burglary at Newcastle Crown Court in October last year. Carney also admitted a separate offence of affray.

On Monday (January 13), they were back in the dock as a judge sentenced Carney to 18 months imprisonment and McDougall received a nine-month custodial term.

Sergeant Ashleigh Goldhawk, of Northumbria Police, said: “These two offenders showed a total disregard for the law as they shamelessly broke into the bakery and made off with a significant amount of money.

“Their actions had a significant impact on a number of people, including the employees who were forced to temporarily put their lives on hold while the shop was closed as new locks were fitted and the damaged safe replaced.

“Offenders like Carney and McDougall cannot be trusted to live in a lawful society, and as a result, they now face a spell behind bars to reflect on the severity and consequences of their actions.

“Their conviction was made possible because of the tenacity and professionalism of those officers who worked tirelessly to ensure they had their day in court.

“We will continue to do everything we can to ensure those who flout the law and bring misery to our communities are dealt with robustly.”

The court heard that the break-in had a significant impact on the store and its employees.

In a statement, the company’s Area Manager for the North-East of England said: “I can say on behalf of Greggs that we hope the courts deal with this in an appropriate manner as this has also upset staff at the store.”