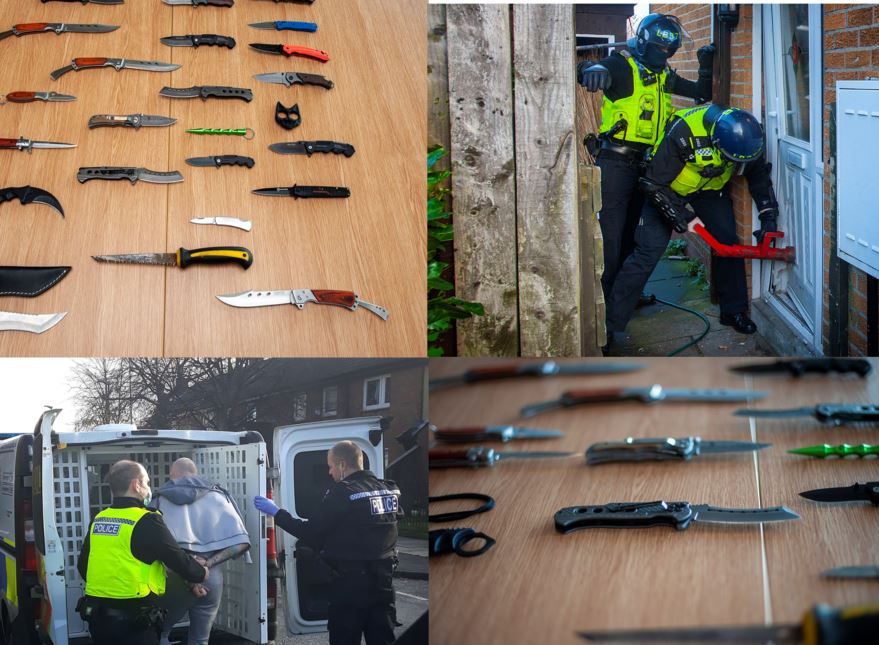 A total of 127 people were arrested and 59 weapons seized as part of an action-packed week to tackle serious, violent crime.

Last week, teams across the Force took part in Operation Sceptre – a coordinated effort to clampdown on knife crime and violence in our communities.

As part of the activity, a dozen early morning raids were carried out across Tyneside recovering a number of firearms, other weapons, cash and a small cannabis farm.

Officers were also deployed across Newcastle and Gateshead to conduct searches, looking for any knives or weapons hidden in bushes, parks or derelict buildings – of the 127 sweep searches carried out only one machete was found.

Of the 59 weapons recovered – 33 were seized by officers and 26 were voluntarily handed over during a series of engagement visits with collectors and weapons enthusiasts.

The response has been praised by the Force’s Assistant Chief Constable Neil Hutchison, who said it was vital officers carried out this work to prevent the devastating harm caused by knife crime.

He has reiterated the Force’s commitment to targeting offenders who use weapons and also highlighted the importance of the work the Force does with communities and partner organisations to understand and address the factors which cause knife crime -  and to educate young people about the devastating consequences it can have.

He said: “Our stance on knife crime and serious violence is simple – it has absolutely no place in our region.

“We have seen incidents of knife crime falling across the North East, but we are far from complacent and one incident is still one too many. That is why we will continue to take part in initiatives like Operation Sceptre, as part of the dedicated work which is going on year-round to reduce the impact of knife crime.

“Thanks to our officers, 59 weapons have been recovered through a mixture of enforced seizures and voluntary surrenders during our engagement activity – that’s 59 weapons which can now be disposed of safely and will never be used to kill or seriously injure someone.

“I want to reassure our communities that we are not only bringing offenders to justice, but also working hard to steer young people away from engaging in serious violence in the first place.

"We are committed to making sure the streets we live and work continue to be as safe as they can be.”

If you have information about someone who is in possession of a prohibited weapon, or want to report any suspicious activity, please get in touch with us using the Tell Us Something page on our website or report it to Crimestoppers on 0800 555 111

Northumbria Police and Crime Commissioner, Kim McGuinness, said: “There’s no question about it - knives ruin lives. This operation has a clear goal of getting dangerous weapons off our streets and its done just that, which is great. We need to keep building on this and it’s not just about arrests and prosecution but prevention too. Along with our police force, my Violence Reduction Unit is committed to engaging with young people, and where possible, is getting out there working with schools, youth groups, charities – we all want the North East to be an area where no-one carries a knife – quite simply no-one should feel they have to.”