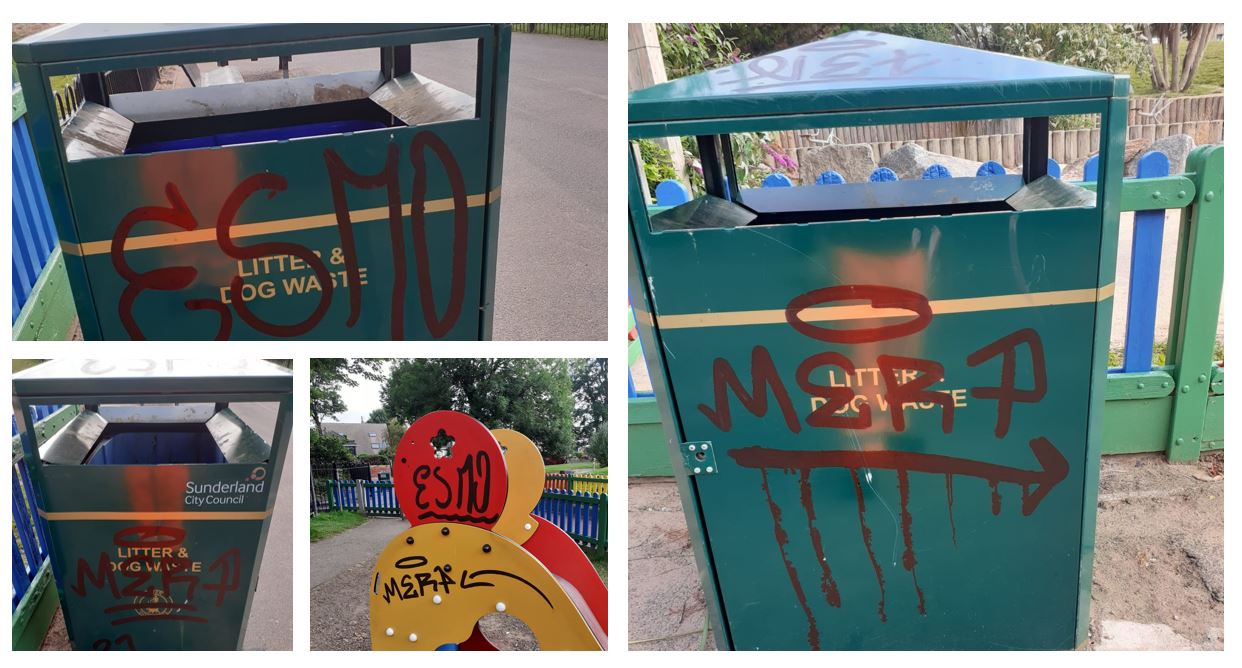 Two young teenagers who daubed graffiti across their community are to attend a youth intervention programme – to help divert them away from future criminality.

An investigation was launched in August following a spate of vandalism in Roker Park as well as on the Seaburn and Roker seafront in Sunderland.

The graffiti, which caused £2,000 of damage, all contained the same or similar ‘tags’ – and officers carried out a range of enquiries in a bid to find those responsible.

After uncovering an online graffiti group claiming to operate across Sunderland and South Tyneside, police tracked down two teenagers who they suspected were responsible.

The pair were brought into custody, and in interview accompanied by their parents, the 15-year-old boy and 13-year-old girl both admitted they were behind the graffiti spate.

They will now both attend youth surgery sessions to educate them about the effects of such behaviour and help divert them away from any future criminality.

PC Louise Reed, of Northumbria Police, said: “This spate of offending caused significant upset within the community, not to mention it was an eyesore for residents and visitors alike.

“Intentional acts of criminal damage are totally unacceptable, and upon learning of these spate of incidents, we were determined to identify those responsible.

“Our enquiries led us to an online graffiti group, of which the majority of its members were children and young adults. Quite quickly, we were then able to narrow down our search and identify those responsible.

“Those two young teenagers, after being sat down with their parents, have duly accepted what they did was wrong and understand the serious impact that their irresponsible actions have had.

“Where possible and appropriate, we want to reduce the criminalisation of young people in our communities. That’s why both teenagers will now take part in educational and intervention work to take responsibility for their behaviour while also being diverted away from further criminality.

“We would like to thank the local authority and all our partners for their support and will continue to do all we can to tackle anti-social behaviour, ensuring this area remains a safe place to live and work.”

Northumbria Police & Crime Commissioner Kim McGuinness added: “It’s great to see those behind graffiti being tackled like this. Graffiti brings down neighbourhoods and often costs councils and businesses money to remove it.

“I hope this proactive policing will be a warning to others that anti-social behaviour like this will not be tolerated. ”

She said: “We know how important the environment is to our residents and that graffiti is something that really upsets them so I’m pleased to hear that the two young people behind this graffiti have accepted that their actions were wrong.

“Our teams work really hard to keep our award-winning parks and beautiful seafront looking their best all year round and it’s a shame when they get diverted away from that to clean up unsightly graffiti.”

If you are concerned about anti-social behaviour in your community, please contact police via the ‘Tell Us Something’ page of our website or by calling 101.

If a crime is happening, or in an emergency, always ring 999.