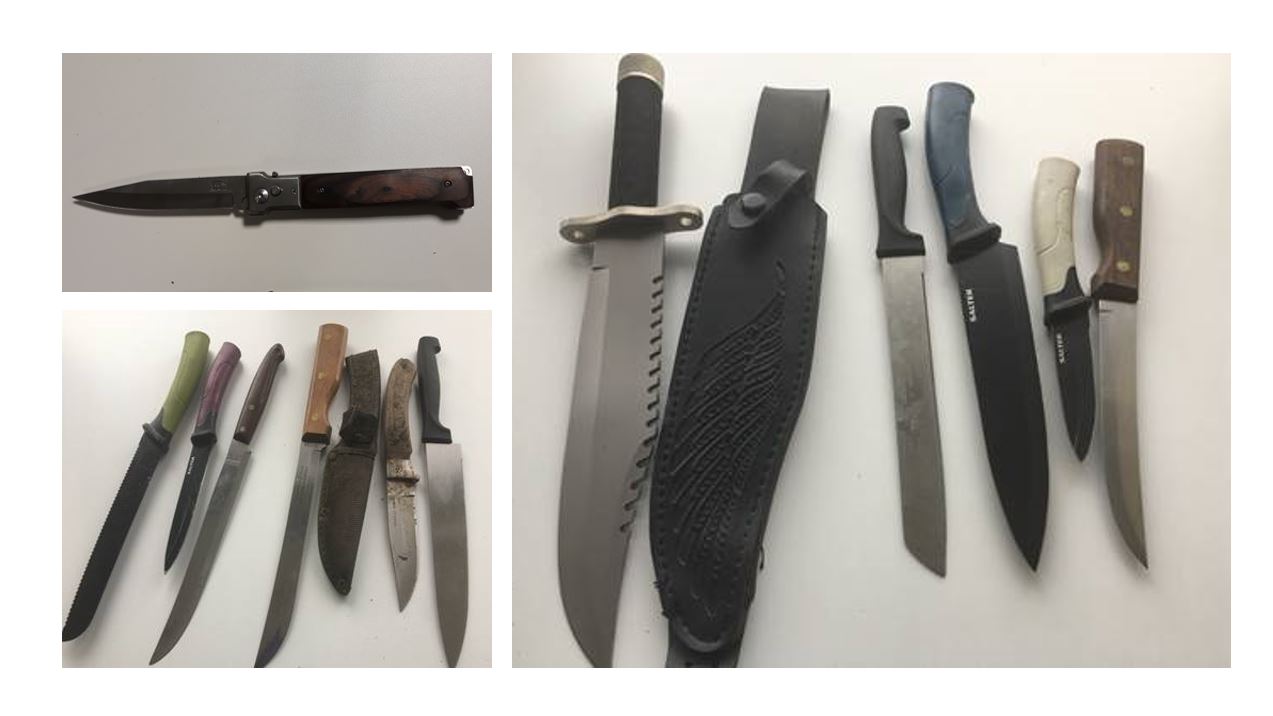 An action-packed week aimed at highlighting and reducing the devastating impact of knife crime has seen more than 200 knives and other potentially dangerous items taken into police possession.

Earlier this month, teams across the Force took part in Operation Sceptre – a coordinated effort to clampdown on knife crime and violence in our communities – building on the proactive work already under way to reduce the impact of this type of offending,

Throughout the week seven knife surrender bins were placed at stations around the Force, with a total of 93 items collected. This included old kitchen knives and antiques, providing a way to dispose of such items safely so they never run this risk of falling into the wrong hands.

Meanwhile, other weapons were seized during stop searches, arrests and visits to known knife carriers. In total twenty people were arrested during the operation for a range of offences.

In total, 215 knives and other potentially dangerous items have been taken into police possession.

During the week, we also gave presentations on the impact of knife crime to almost 1,000 school pupils, hosted an interactive educational quiz on the laws of carrying a knife on Instagram, delivered more than 4,000 leaflets into schools and toured the area in our Engagement Van to speak to people of all ages.

The response has been praised by the Force’s Assistant Chief Constable Neil Hutchison, who said it was vital officers carried out this work to help prevent the devastating harm caused by knife crime.

He said: “Our stance on knife crime and serious violence is extremely clear – it has absolutely no place in our region and we are committed to playing our part in tackling this type of offending.

“Thankfully, in our region we do see lower levels of knife crime than comparative areas of the country, however we are not complacent. That is why we will continue to take part in initiatives like Operation Sceptre, as part of the dedicated work which is going on year-round to reduce the impact of knife crime.

“We will continue to bring offenders to justice and importantly also educate young people about the dangers of carrying a knife and the devastating impact this can have.

“There is always a choice – by carrying a knife, you risk ruining more than one life forever.”

He added: “We would urge anybody who has any information about people going out with a weapon to come forward. Share that information with police, so we can act now.

“By working with our communities and partners we call all help ensure the North East remains one of the safest in the country to live, work and visit – together we can make a difference.”

Northumbria Police and Crime Commissioner, Kim McGuinness, added: “Knife crime completely destroys victims, families and communities - which is why we must, and are, taking it extremely seriously across Northumberland, Tyne and Wear. Northumbria Police are very proactive tackling this as the results show, but our police can’t fight knife crime alone. This where my Violence Reduction Unit comes in, with its team of educators working with children in our schools, making them aware of the dangers and encouraging them to do the right thing. Carrying a knife is never the right choice.”

If you have information about someone who is in possession of a prohibited weapon, or want to report any suspicious activity, please get in touch with us using the Tell Us Something page on our website or report it to Crimestoppers on 0800 555 111