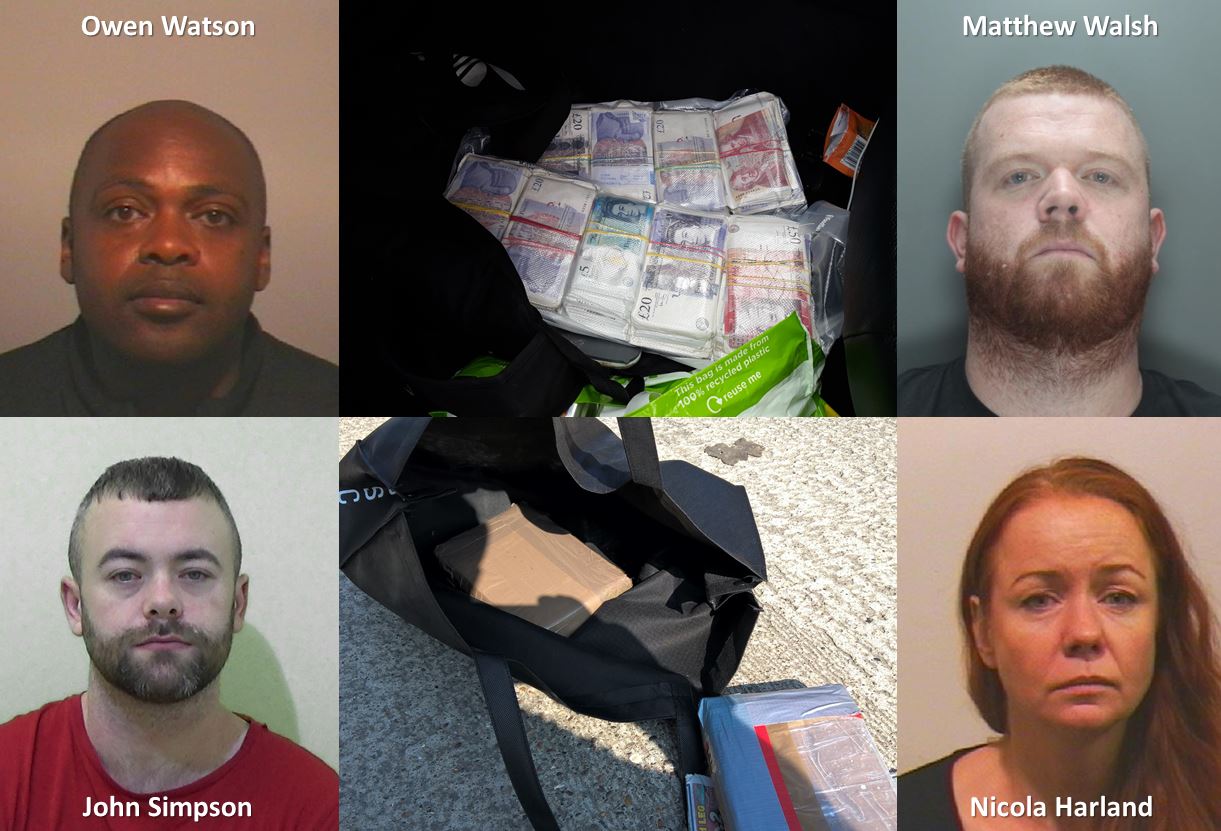 A network of organised criminals are facing jail after police busted them transporting a haul of cocaine into the North East and laundering more than £100,000 in dirty money.

Owen Watson, John Simpson, Matthew Walsh and Nicola Harland have all been convicted of helping to launder money and deliver Class A drugs on behalf of criminal linchpin Mark Crame.

The court was told how an investigation began in 2018 when Northumbria Police’s Priority and Organised Crime Team (POCT) began carrying out surveillance on Crame as he travelled between Newcastle and Liverpool.

Crame, 49, was believed to have been in control of a drugs factory and so was arrested in Jesmond in July 2018 where he was found in possession of 2kg of cocaine worth an estimated £100,000 in street value.

He was arrested alongside his courier Owen Watson, 44, who was attempting to travel back to Liverpool in possession of £46,000 in cash.

When the drugs seized from Crame were sent away for forensic analysis, the DNA of Matthew Walsh, 33, was found on the wrappings and so he was subsequently arrested on suspicion of preparing drugs for transport.

Enquiries into the criminal network continued but as that investigation was underway, John Simpson was stopped at Newcastle’s Central Station after being seen acting suspiciously by uniformed police.

He was searched and found in possession of £62,000 as he attempted to get on a train to Liverpool. Enquiries into telephone communications later identified him as one of Crame’s couriers.

Following their arrests, detectives on the POCT team began a financial investigation of their accounts that uncovered more than £30,000 in unexplained cash in a bank account belonging to Crame’s then girlfriend, Nicola Harland.

Harland, 47, was later charged with being part of Crame’s criminal network alongside Crame and Walsh, Watson and Simpson. Crame would never appear in court after taking his own life in September 2019.

Watson and Simpson pleaded guilty to the charges against them but Walsh and Harland denied any involvement and their cases went to trial.

The group now all face a spell behind bars when they are sentenced at Newcastle Crown Court on September 13 alongside Simpson, 29, of Rydal Road, Gosforth, and Watson, 44, of Sullington Drive, Liverpool.

Speaking after the trial, Detective Chief Inspector Paul Woods praised the hard work and tenacity of all those who helped bring the organised crime group before the courts.

The Northumbria Police detective said: “I hope this case send a strong message to the organised crime groups who think they can come into our towns and cities to supply illegal drugs.

“As part of Operation Sentinel, our officers are working tirelessly to identify and stop people involved in this type of criminality, and put them behind bars.

“Anyone seeking to make money from selling harmful, addictive illicit substances can expect to be pursued by our teams, have their operations dismantled and their drugs and cash seized.

“People like Harland and Walsh have little to no regard for the vulnerable people caught up in the middle of their actions. All they care about is profit. I am pleased the jury saw the truth and found then both guilty.

Harland and Walsh were convicted on Monday after a two-week trial. Simpson and Watson had both previously admitted being concerned in the supply of class A and possession of criminal property.

Anyone who has information about drug dealing in their community is asked to contact police on 101 or on the ‘Tell Us Something’ pages of Northumbria Police’s website.

You can also report information anonymously by calling independent charity Crimestoppers on 0800 555 111.