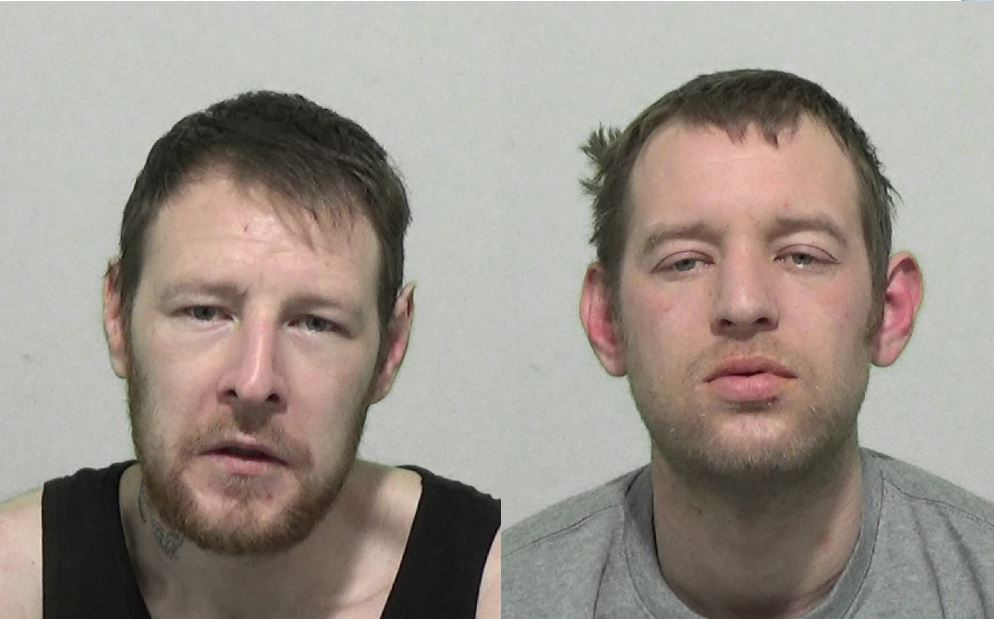 Two brothers who burgled a hairdresser & beauty salon arrested, charged and convicted – all within just 36 hours

David (pictured left) and Aaron Richardson, both of Sunderland, will be sentenced later this month

Two brothers who brazenly burgled a hairdresser and beauty salon were arrested, charged and convicted – all within just 36 hours.

David and Aaron Richardson were both detained in the early hours of last Wednesday (May 26) after the Holmlands salon was raided.

Response officers supported by the Dog Section were at the scene within five minutes and soon sniffed out the thieves, who were found hiding behind a nearby car. A stash of stolen perfume was also seized nearby.

Both men were brought into custody and later charged with burglary. Both admitted the offence when appearing before magistrates in South Tyneside last Thursday morning (May 27).

The brothers also pleaded guilty to a string of unrelated offences.

David, 30, admitted burgling Jimmy’s Barbers in Sunderland on the morning of April 18, along with handling stolen goods after he was found in possession of more than £4,000 worth of drills and showers swiped from B&Q.

He also pleaded guilty to possessing stolen property after being found to have handled a £3,000 car that had been stolen from an address on Cairo Street on the morning of April 25.

As well as the burglary, his older brother Aaron, 31, admitted theft from motor vehicle and fraud by false representation relating to the theft of a bank card from a car in Ashbrooke on March 21. Aaron later fraudulently used the stolen card at a petrol station.

David and Aaron, both of Hendon Valley Court, Sunderland, will be sentenced at Newcastle Crown Court on June 25.

Detective Sergeant Chris Raper-Smith, of Northumbria Police, said: “This is a fantastic outcome with two offenders arrested, charged and now convicted at court within just 36 hours.

“The Richardson brothers have consistently shown a total disregard for both the law and the livelihoods of others, and their latest criminality saw them selfishly break into local businesses and swipe any valuables that they could find.

“We will not tolerate this type of behaviour and look forward to both being sentenced for their crimes later this month. We will continue to do all we can to put burglars and thieves before the court, and hope this positive action offers reassurance to all our businesses across the region.”

Detective Chief Superintendent Aelfwynn Sampson, head of crime at Northumbria Police, added: "This was a fantastic team effort by all criminal justice partners including the Crown Prosecution Service (CPS) and the courts in order to achieve an effective and swift outcome.

"The fact that these offenders were dealt with so quickly is testament to the quick and effective response by our officers who seized vital evidence, which was then used to pull together an excellent prosecution case."

Anyone who sees anything suspicious in their community is encouraged to report it to police via the ‘Tell Us Something’ page of our website or by calling 101. In an emergency, or if a crime is happening, always ring 999.