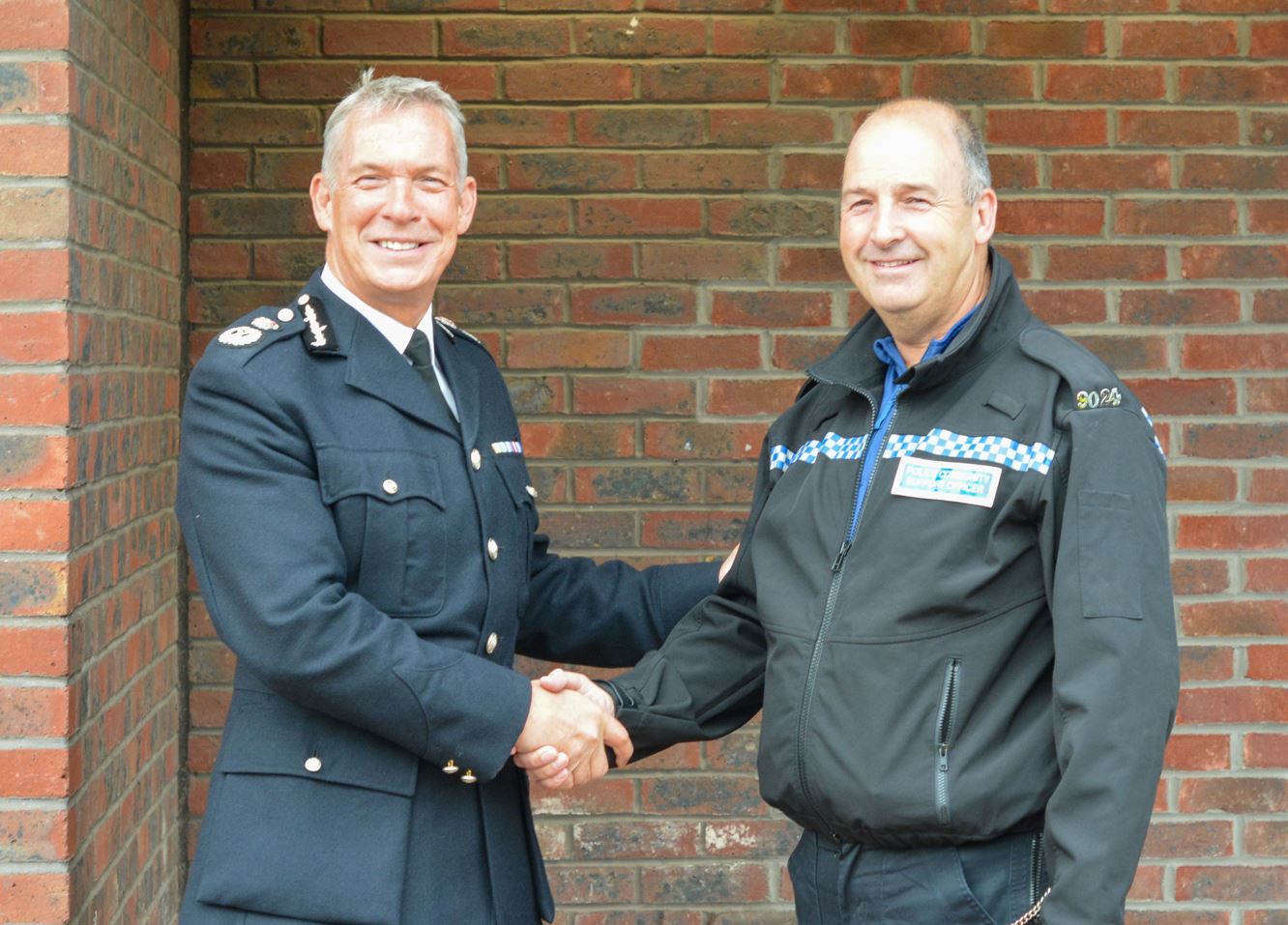 Meet Mick Casey – one of Northumbria Police’s first-ever PCSOs who continues to protect some of Sunderland’s most vulnerable people.

Today marks the 20th anniversary since the role of a Police Community Support Officer (PCSO) was created, given Royal Assent by Queen Elizabeth II as part of the Police Reform Act on July 24, 2002.

The legislation paved the way for the first-ever batch of PCSOs to take to the streets across the country – with a range of powers to assist police officers and act as a permanent presence within communities.

PCSO Casey was one of just 13 in Northumbria Police’s first intake in December 2003 – and has proudly served the communities of Sunderland ever since.

This week, ahead of Sunday’s anniversary, PCSO Casey was met by Chief Constable Winton Keenen QPM who thanked him personally for his service.

Chief Constable Keenen said: “It was a real pleasure to catch-up with PCSO Casey and I would like to extend my thanks to all of our PCSOs across the Force who play a crucial role alongside our front-line officers, staff and volunteers, in protecting the public and ensuring the North East continues to be a safe place to live, work and visit.

“Over the last two decades, the role of a PCSO has changed somewhat – but what has remained constant is their passion, enthusiasm and desire to deliver an outstanding service to our communities.”

Reflecting on his policing journey so far, PCSO Casey, 55, admitted he wasn’t entirely sure what the role of a PCSO would entail.

But there is no doubt it has provided him with some incredible memories and friendships ever since.

“Nobody really knew what the role would entail as it was brand new,” PCSO Casey said. “But I’d spent the last 20 years as a joiner, saw the opportunity and thought ‘let’s give it a try’.

“The whole idea was for PCSOs to patrol the footbeat, helping to bridge the gap between police and the public. Look at the name – PCSO – it says police and community. We’re here to help both.”

For more than a decade, PCSO Casey has worked closely with organisations including the Salvation Army, Poplar House and the YMCA in Sunderland to help those who may be vulnerable and extend out his hand of friendship.

“It’s been my life for the last 19 years,” he said. “I’ve been working in Sunderland city centre so long and you naturally get to know so many people. Whether it’s people working in the shops, or coming and going from work every day, staff at the university or whole families who live here.

“Over time, you build up that trust and respect, you recognise people and they recognise you. In a way, as a PCSO, it doesn’t really feel like coming to work – which I’m incredibly lucky for.

“There’s no point going into anything blinkered – I’ve dealt with a lot of people who’ve had hard knocks in life, or who are in a tough spot, but you go into each situation with the want to help them, to support them. I’ve found if you are good to people they are usually good to you back.”

PCSO Casey continued: “It’s community policing at its best – there’s a greater demand on police officers now and sometimes it can be hard for them to stop and get to know people all the time. On busy days, you can go from one job to the next.

“But that’s what PCSOs can offer. We can take that extra time to help get somebody to hospital, or help someone find a bite to eat, stop and ask people how they’re getting on.

“If I deal with someone and they come away thinking ‘Oh, Mick was nice’ – then I’ve done my little bit to help build people’s trust in Northumbria Police as a whole.”

Nearly 20 years on, the role is as important as ever – with Northumbria Police currently having more than 180 PCSOs playing a key role across the North East.

And with the Force’s current recruitment drive in full swing – inviting people of all backgrounds to consider joining #TeamNP – what advice would PCSO Casey give to anyone thinking about following in his footsteps?

“I’ve loved my time as a PCSO – it’s a job for a people’s person, and I am lucky to have met some fantastic people both at work and in the community over the years,” he said.

“I think it’s a role where you get what you put into it. Don’t be shy, be willing to get stuck in, talk to people and there’s no doubt you will reap the rewards.

“We live in a wonderful area of the country and the North East is full of fantastic, vibrant people. This job has allowed me to see that first-hand.”

Anyone interested in pursuing a career with Northumbria Police is encouraged to visit careers.northumbria.police.uk and see the wide range of opportunities available.