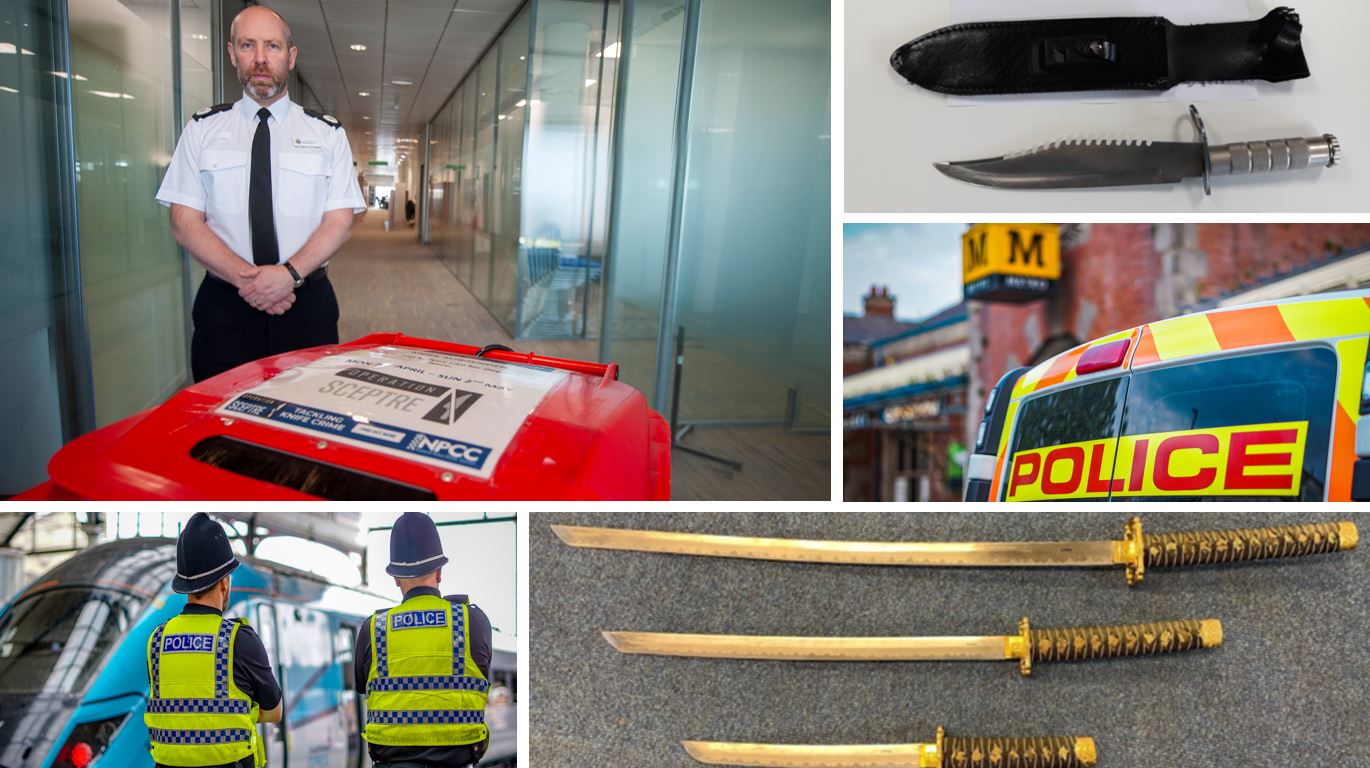 Last week police forces across the country took part in Operation Sceptre – a coordinated effort to clampdown on knife crime and violence.

The week of action built on the work already under way in the area to tackle this type of offending and saw more than 210 knives and other potentially dangerous items taken into police possession in our area ranging from kitchen knives to machetes and swords.

Dedicated searches and weapons sweeps were also carried out, as well as targeted arrests of suspects believed to be involved in this time of criminality – with 79 finding themselves in handcuffs in connection with a range of offences.

Throughout the week seven knife surrender bins were placed at stations around the Force – providing a way to safely dispose of such items so they don’t fall into the wrong hands.

Officers also visited 50 schools across the region to help educate young people about the dangers and consequences of carrying a knife.

Our officers handed out more than 5,000 leaflets in schools and our communities and toured neighbourhoods in our Engagement Van to speak to people of all ages.

The operation has been praised by the Force’s Assistant Chief Constable Neil Hutchison, who said this type of work is ongoing to ensure the North East remains a safe place to live, work and visit for everyone.

He said: “This activity is only a small part of the proactive work constantly ongoing to reduce the impact of this type of offending, support victims and educate communities.

“Knife crime and any form of criminality linked to it has no place in our region and we will continue to target suspects, seize dangerous weapons and support those impacted by such devastating crimes.

“Thankfully, in our region we do see lower levels of knife crime than comparative areas of the country, however this does not mean we are complacent – our stance is unwavering and we proactively work with colleagues in other organisations including local authorities, health, education, transport, probation and charities to share information and reduce violence in our communities.”

“We really do urge anyone with concerns about knife crime to get in touch with police. By speaking up and acting now you could help save a life.”

Search warrants were also executed last week resulting in the seizure of a significant quantity of Class A drugs, 16 knives, eight machetes, an extendable baton, a pair of nunchucks and a push dagger.

A Force-wide joint operation with Nexus was also carried out with officers deployed at Metro stations around the region.

Northumbria Police and Crime Commissioner, Kim McGuinness, said: “Knife crime is real - but there is lots happening in our region to drive it down and keep our region a safe one. My Violence Reduction Unit team will keep getting in front of kids in schools and educating them on the realities, the dangers and the devastation having a knife in your pocket can bring. And this prevention work supports all the activity from Northumbria Police from amnesties to arrests. The fight against knife crime here in the North East will not stop.”

Anyone who has any information about people carrying knives or concerns about someone they know can share that information via the ‘Tell Us Something’ page of our website or report it to the independent charity Crimestoppers anonymously on 0800 555 111.