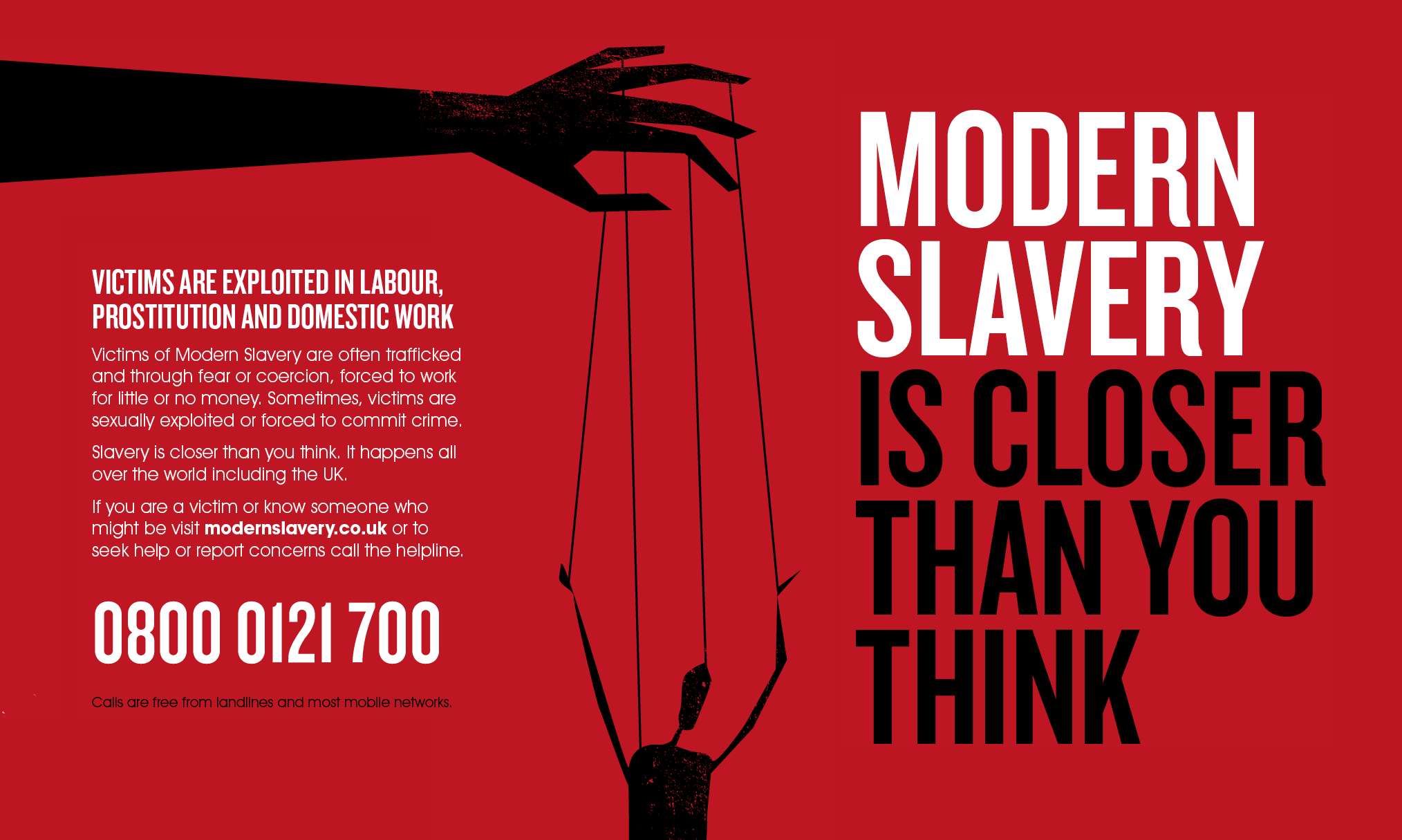 Modern slavery refers to situations where one person has taken away another person’s freedom – their freedom to control their body, their freedom to choose to refuse certain work or to stop working – so that they can be exploited. Freedom is taken away by threats, violence, coercion, abuse of power and deception.

Most commonly people are trafficked into forced labour in industries such as agriculture, construction, hospitality, manufacturing and car washes. Many women and girls are trafficked for sexual exploitation. Victims are forced to work against their will in many different settings, including brothels, cannabis farms; nail bars, car washes, and agriculture even within people’s homes.

It is not an issue confined to history or an issue that only exists in certain countries. It is a global problem and it is happening right now.

Human trafficking can also be a part of modern slavery as a person is moved from one place to another; this could be country to country, town to town, or even as simple as one room in a building to another. Even if a victim consents and is willing to be moved, trafficking could still be taking place.

What is Northumbria Police committed to?

Northumbria Police are committed to supporting victims of Modern Slavery and prosecuting those who commit or facilitate these crimes.

We are working with partners to raise awareness of, prevent and improve the response to Modern Slavery and human trafficking cases.

The reality is that it is happening around us, in our towns and cities here in Northumbria.

There is no typical victim of slavery – victims can be men, women and children of all ages, ethnicities and nationalities and cut across the population. But it is normally more prevalent amongst the most vulnerable, and within minority or socially excluded groups.

There are several reasons why people become victims of modern slavery and are often reluctant to come forward. They may be unaware that they are moving into circumstances of modern slavery if they are recruited or moved by deception or coercion. Victims are generally living in fear, do not fully understand what is happening to them and comply with their abusers in hiding the reality – often because of threats of violence made to them and their families.

Unfortunately, few people understand modern slavery and many confuse it with ‘migrant working’ or ‘illegal immigration’.

It is a problem that transcends age, gender and ethnicities, and can impact both foreign nationals and British citizens.

This area of policing is complex and identifying modern slavery can be difficult. In many cases Organised Crime Groups (OCGs) are behind the trafficking of people into the UK. However, in some cases victims will willingly travel into the UK by their own means (sometimes at the request of their own families), to then only make their first contact with their trafficker based upon an offer of apparent legal and legitimate employment, unaware of the situation that awaits them.

What is modern slavery?

What are the signs of trafficking and modern slavery?

How you can help

Look out for the warning signs above. If you do see anything that seems untoward or just doesn't feel right then please report it to police. We do rely very much on information we receive from the public - they are the eyes and ears of the community. We all have a responsibility to help protect those must vulnerable in our communities.

How can I report my concerns?

If you need help or think someone you know is at risk:

If English isn’t your first language and you’d like to make a report, we can arrange an interpreter.

Alternatively click the link below for help and support leaflets in 11 foreign languages:

Report it online at https://modernslavery.co.uk/contact.html

What is human trafficking?

It is the illegal movement of people through force, fraud or deception, with the intention of exploiting them.

What is sexual exploitation?

When victims are being forced into non-consensual or abusive sexual acts; these can come in the forms of forced prostitution and the abuse of children for the production of child abuse images/videos.

What is domestic servitude?

When a victim is being forced to work in usually private households, usually performing domestic chores and childcare duties. Their freedom may be restricted and they may work long hours often for little or no pay, often sleeping where they work.

What is forced labour/child labour?

Victims may be forced to work long hours for little or no pay in poor conditions under verbal or physical threats of violence to them or their families. It can happen in various industries, including construction, manufacturing, hospitality, food packaging, agriculture, maritime and beauty (nail bars). Often victims are housed together in one dwelling.

What is debt bondage?

Bonded labour is the most widespread form of slavery in the world. A person becomes a bonded labourer when their labour is demanded as a means of repayment for a loan. The person is then tricked or trapped into working for very little or no pay to repay debts their employer says they owe, and they are not allowed to work for anyone else. Low wages and increased debts mean not only that they cannot ever hope to pay off the loan, but the debt may be passed down to their children.

Victims of modern slavery are entitled to ‘special measure’ considerations through the criminal justice system.

Story of a sports girl called Deshae Wise who escaped from Human Trafficking (2017):