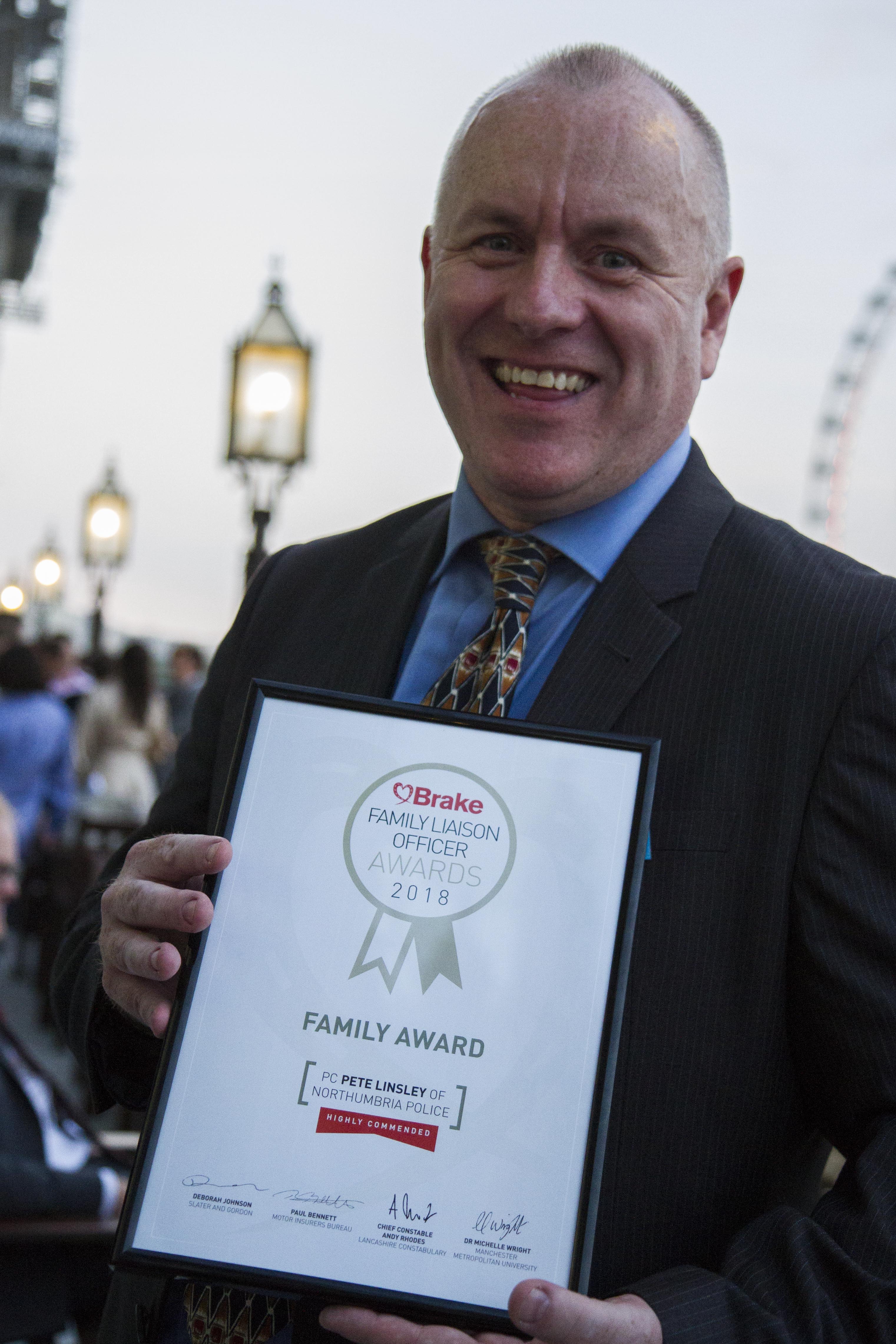 PC Pete Linsley has been with Northumbria Police for 24 years

A long-serving Northumbria Police officer who has helped more than 150 families across Tyneside deal with personal trauma and grief has received national recognition.

As his role as a Family Liaison Officer (FLO), PC Pete Linsley often has the difficult job of breaking devastating news to loved ones after fatal car crashes.

The 49-year-old, who has been with Northumbria Police for 24 years, knocks on every door accepting the information he must pass on will “tear a family’s world apart”.

The most important part of his job, he believes, is then to help “build it back together”.

He has now been recognised nationally for years of emotionally-sapping and intense work.

The committed cop received a commendation at the Brake Family Liaison Officer Awards in London in June as reward for his outstanding service in working alongside families of road crash victims.

“I’m very proud of the work we do,” PC Linsley said. “I think a FLO is an absolutely crucial part of any investigation.

“It’s an emotional job. I remember working with a family on one job for the best part of two-and-a-half years. On my final day, the dad broke down in tears thanking us for what we’d done.

“That’s the life of a FLO. You know when you stand at a front door that you’re going to go into somebody’s house and potentially tear their world apart. Then it’s my job to build it back together.

“Put it this way, if your heart isn’t in it, then you won’t last very long. I’ve been a FLO for a long time and it’s difficult, you need to have 100 per cent dedication.

“You can’t force somebody to be a FLO, they have to want to be one. Otherwise you wouldn’t be able to do what is required – cope with the demands, the emotional strain, jobs that really stick with you.

“But we’re a tight-knit team, that’s what really helps us along. If there’s something on our minds, we have people to go to, people we can chat to about what we’ve seen.

“I’m lucky to be part of such a fantastic team with wonderful supervisors who provide us with all the support and guidance we need.”

PC Linsley – who spent six years with Cleveland Police before joining Northumbria – was initially deployed as a PC in the West End of Newcastle before linking up with the Force’s motor patrols team in December 1997.

However, his remit is not exclusive to traffic collisions. As a FLO, he has been deployed on a wide range of jobs – including murders, stabbings and suicides.

“It’s generally fatal collisions that I deal with,” he said. “I think I’ve probably dealt with more than 150 over the years. That’s 150 victims who’ve tragically died, and 150 families who have been left absolutely devastated. It’s not an easy job, and some aspects can be particularly unpleasant.

“But I can be deployed to anything as a FLO. It’s not just traffic – and there are a few jobs that stick in your memory. I remember being deployed to a family where a girl had drowned and I supported the family for a year.

“Sometimes you turn up at families’ houses and you can see the colour drain from their face right in front of you. Whoever it is, it’s our job to look after them as best as we possibly can, to be there for them in their hour of need.”

The family, who wish to remain anonymous, nominated him for the ‘Family Award’ at the Brake Family Liaison Officer Awards and travelled with PC Linsley to London for the ceremony in June, where he finished ‘highly-commended’ in his category.

They say he went “above and beyond” in the aftermath of the devastating incident.

“Pete was assigned to our family when two members were killed instantly in a road crash, completely devastating us all,” they said.

“The genuine kindness, support, care and guidance he gave us was second to none, and we feel Peter went above and beyond the role of a FLO to help us in any way he could.

“In our eyes, there was nothing better he could have done and we think he absolutely deserves this highly-commended award as recognition for being an outstanding family liaison officer.

“Words seem inadequate to describe how thankful we are as a family to Pete.”

For PC Linsley, who will retire from the Force in March 2019, it proved to be a humbling experience as he was joined at the House of Commons by colleagues Sergeant Steve Armstrong, who works in motor patrols, and family liaison coordinator Sergeant Dave Clement.

“It was an experience that will last a lifetime,” PC Linsley. “I remember when I got the initial email through from Brake – I had to read it, read it and read it again for it to sink in.

“I couldn’t believe I’d been nominated for an award. I was almost moved to tears.

“It was a special day and it was great to have my colleagues there to share the occasion.”