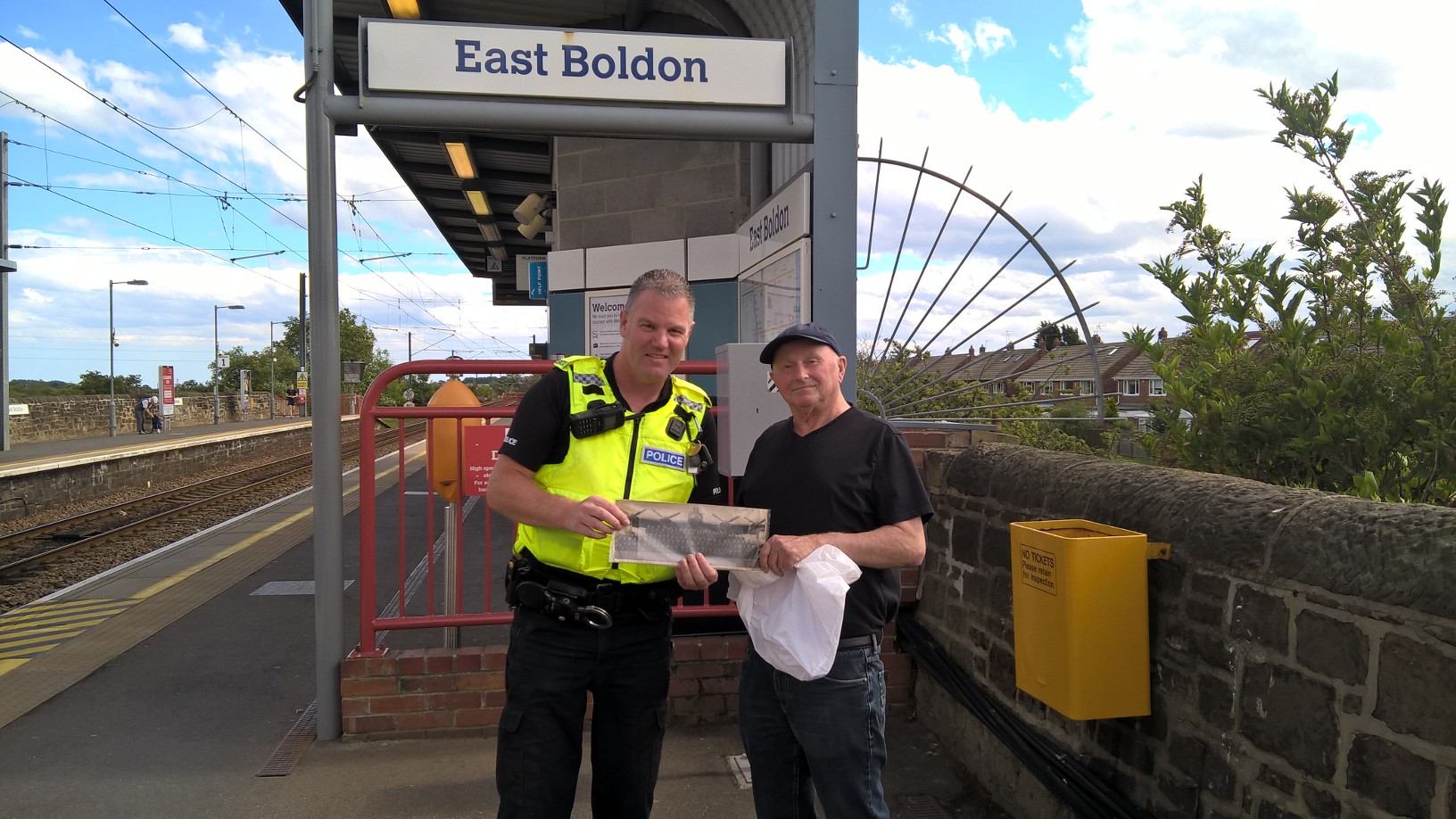 The son of a former RAF corporal has thanked Northumbria Police and a passing Good Samaritan after he was reunited with a treasured family photograph.

An old World War Two photograph was found at East Boldon metro station in June by Paul Clark who discovered it rolled up and soaking wet on the ramp leading up to the platform.

The photograph depicted a Lancaster bomber with its maintenance crew and members of the 617 and 627 ‘Dambusters’ squadron.

After the historic snap was retrieved and handed into officers, police ran an appeal looking to return the dried-out photograph to its rightful owner – and the message was successfully delivered to owner Phillip Rose, from Blyth.

“I can’t believe it,” Mr Rose, 68, said. “I feel incredibly fortunate that this sentimental photograph has been returned to us.

“I remember I had it wrapped in a bag when I was getting onto the metro at East Boldon, and as the doors shut, I realised it must have dropped out. I was absolutely devastated – I thought it had been lost forever.

“It was given to me by my late father Thomas Rose, formerly of 617 Squadron. He was a corporal in the maintenance crew and it’s one of the few pictures of him in service that I own.

“In November 1944, he went over to Russia as part of the maintenance crew with the Lancaster bombers and was involved in the mission to sink the giant German warship Tirpitz.

“The brave men and women should never be forgotten, so it’s really important that photographs like this are preserved. I feel very fortunate that Paul found the photograph and was kind enough to hand it in to police.”

Mr Clark, 53, of Cleadon, admitted he initially posted his discovery on the Internet in a bid to find the owner before alerting his local Neighbourhood Policing Team.

“I remember it was a damp, misty morning,” he said. “I knew it must have meant something to somebody, it was probably somebody’s family member pictured, so I had no hesitation of picking it up and trying to see if I could return it to the owner.

“I initially went on Facebook and I put it on a couple of ‘Dambusters’ groups as I recognised the squadron number, but nobody came forward.

“But after speaking to the police, I’m glad it all worked out and it’s now back safely in the hands of the owner.”

PC Paul Talbut, who led the police’s search for the rightful owner, said: “I am delighted that this photograph has been safely returned to Phillip.

“It’s not very often that you come across these kinds of historic and sentimental items, yet it could have so easily been lost and never found again.

“But Paul’s kindness and thoughtfulness allowed it to be returned to its rightful owner, and I know Phillip is incredibly thankful for that.”