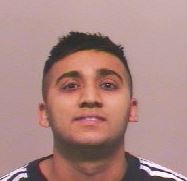 A man who “preyed” on vulnerable teenagers has been give a 37 year sentence after being found guilty of rape and drugs offences.

Omar Sharif, of Sunderland, was handed the sentence at Newcastle Crown Court today (Wednesday) after being convicted of four charges of rape against three victims and one count of sexual assault as well as a number of drug offences.

A jury was told how Sharif – a student at the time – used the young vulnerable woman as “entertainment” at parties where he was also dealing drugs.

The victims were aged between 17 and 19.

Sharif, 24, admitted a number of drugs charges but denied allegations of sexual abuse between October 2015 and July 2016 and went on trial at Newcastle Crown Court in November.

Sharif was brought to justice under Operation Argon - a victim-focused investigation led by Northumbria Police's specialist Safeguarding team aims to protect the most vulnerable in society.

Lead investigator Acting Superintendent Claire Wheatley said she hoped the sentencing would help bring some closure to the victims – and send out a strong message to other offenders.

She said: “These women have been incredibly brave and have been supported throughout the investigation by officers from our dedicated victim team. I hope today they feel a sense of justice and relief after giving evidence at two trials after the first collapsed because of Sharif's lies.

"He is a manipulative man who knew what he was doing. He preyed on young, vulnerable women he thought would never report him. He thought he was untouchable and he thought he could lie his way out of everything. He failed and today he will now begin a 37-year sentence.

"I want to reassure any others victims of sexual abuse to please come forward and report it. We are here to take action and give victims a voice – no-one should suffer in silence.

“Anyone who comes forward to report abuse of this nature will be treated with compassion by specialist officers and will be supported throughout.

“We all have a role to play in helping tackle these awful crimes which prey on the most vulnerable. I would urge anyone who sees something suspicious to report it to police. This can be done on the 101 number or 999 in an emergency.”

Sharif, of Brunton Terrace, was found guilty of four charges of rape against three victims and one count of sexual assault. He was also found guilty of:

Three counts of supplying Class A drugs.
One charge of trying to conceal £2,000.
He pleaded guilty to:

Two counts of being concerned in the supply of Class A and B drugs.
Two counts of possession of Class A drugs.
One count of supplying Class A drugs.
Three counts of perverting the course of justice.
One count of perjury.
For all of the offences he was sentenced to a combined total of 37 years and six months. He was handed a 32 year and six month jail term with a further five year licence.

Sharif was found not guilty of two counts of rape against a 17-year-old.

Three other people were also convicted as part of the operation.

Milagros Simona Sanchez, 25, of Chester Road, Sunderland, previously admitted to allowing her property to be used for the supply of drugs and was given an 12 month community order.

Sharif’s brother Amer, 20, of Brunton Terrace, Sunderland, denied doing acts tending or intending to pervert the course of justice after being accused of helping to try to coerce a woman into making a false statement about one of the victims. He was found guilty at trial and was given a 12 months sentence, suspended for 18 months.

James Sykes, 22, Larchwood, Harraton, Washington, was sentenced to 12 months suspended for 12 months for concern in the supply of MDMA.

Anyone who has any concerns around potentially vulnerable people being exploited should contact police on 101 or 999 in an emergency. For more information about spotting the signs of sexual exploitation, search 'Northumbria Police What Are The Signs'.