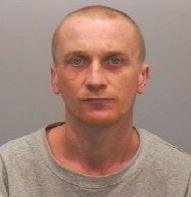 Drink-driver jailed after killing 91yo pedestrian in collision

A drink-driver has been jailed after he killed a 91-year-old pensioner after he hit her with his car while four times the legal limit.

Krzyszrof Zukowski, 38, has today been jailed for 10 years after he crashed into Catherine Duncan on Jubilee Road in Gosforth last year.

She had been crossing the road when she was struck by Zukowski's VW Passat just after 8.30pm on April 6 last year.

Newcastle Crown Court was told how he had taken his wife's vehicle without her permission prior to the collision and he was not insured on the vehicle.

When police arrived at the scene they carried out a breath test which Zukowski failed. It recorded he had 141mg of alcohol in 100ml of breath, four times the legal drink drive limit of 35mg.

Ms Duncan was rushed to hospital with serious injuries but sadly doctors were unable to save her and she passed away the day after the collision.

He pleaded guilty to all four charges and today (Tuesday) he was jailed for 10 years by a judge at Newcastle Crown Court.

Northumbria Police's Sergeant Lee Butler was the senior investigating officer in the case and said Zukowski had shown little remorse throughout the proceedings.

He said: "The driver in this case has eventually pleaded guilty but he has not shown remorse and continued to hold up legal proceedings.

"He has not co-operated with police, withdrawn pleas and argued with his own counsel which has made this case even more difficult for Ms Duncan's family.

"They have shown incredible courage throughout the criminal case and have come to court today to see Krzyszrof Zukowski put behind bars.

"The lengthy sentence he has been handed today reflects just how serious his actions were and the judge's comments were particularly damning.

"When Zukowski got behind the wheel that night he was putting the lives of the public at risk and ultimately it cost an innocent woman her life.

"His court appearance comes at a tragic reminder of the dangers of drink driving at a time when we are running our own Christmas drink and drug drive campaign.

"It is very frustrating to see drivers continue to ignore warnings about the dangers of driving while under the influence and it shouldn't take a fatal collision for people to think twice about it.

"Don't be that person who takes the risk and gets behind the wheel after a Christmas night out or a trip to the pub with friends.

"Our officers will be out in force to catch you and you will pay the ultimate price - you will have your licence removed and you could end up behind bars."

If you suspect anyone of drink or drug driving then contact police on 101. If you witness anyone driving erratically or putting lives in danger then call 999.