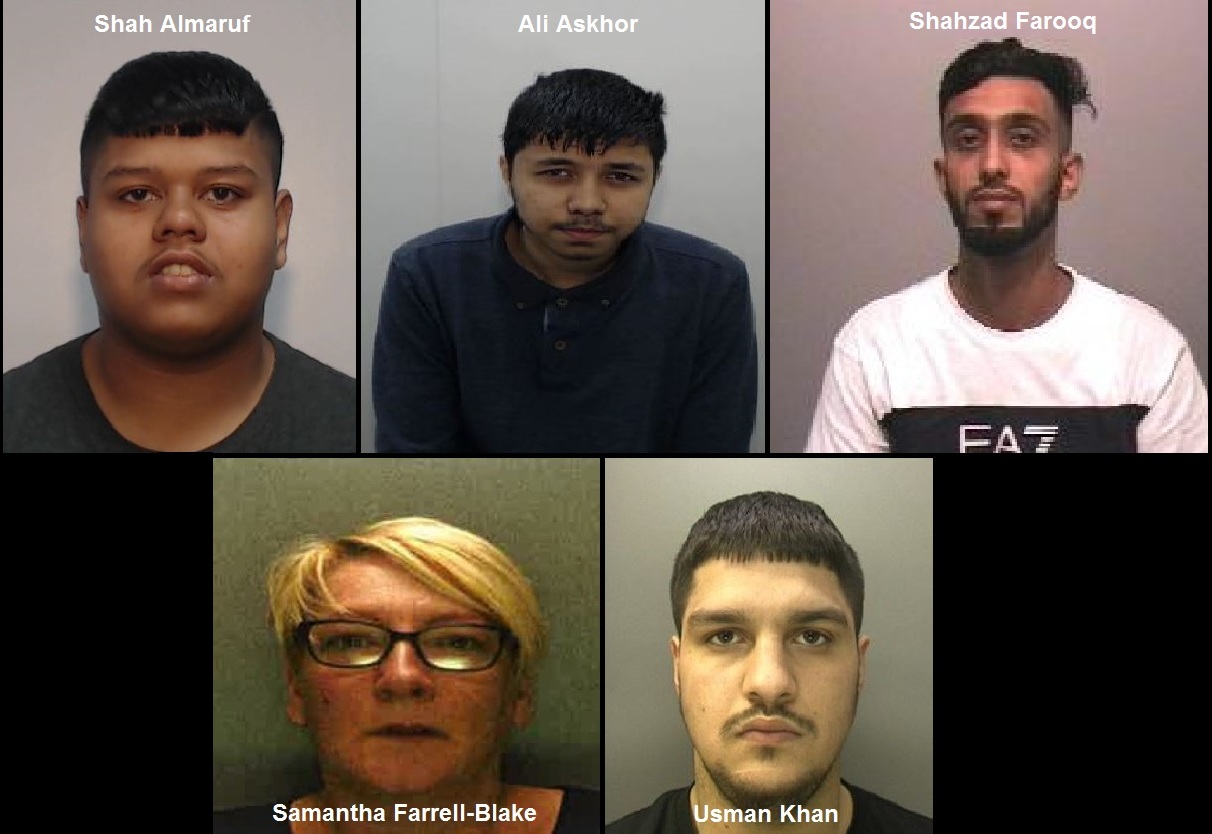 Gang of travelling thieves jailed after being convicted of £300,000 jewellery heist

A gang of travelling thieves are facing jail after being convicted of a £300,000 jewellery heist in Newcastle.

Usman Khan led the sophisticated criminal gang in a plot to rob Sunny Jewellers on Tamworth Road in the west end of the city.

A court was told how his band of thieves travelled from the North West to carry out surveillance on the shop in Spring this year.

Khan and his followers eventually sprang into action on May 16 this year in a smash and grab that lasted less than 50 seconds.

CCTV shown in court showed the moment gang member Ali Askhor, 19, posed as an innocent customer to gain entry to the jewellers.

The footage showed a staff member unlock the door at which point the rest of the gang burst into the shop wearing balaclavas, gloves and carrying hammers.

A jury was told how it was Usman Khan, 20, Shahzad Farooq, 21, and an unidentified third man who carried out the robbery.

They smashed the display cabinets with their weapons and stole jewellery estimated to be worth a staggering £300,000.

Smoke alarms in the shop were activated before the men fled the scene in a black Audi S5, leaving staff badly shaken but thankfully uninjured.

Detectives launched an investigation but they were dealt a blow when they discovered the gang had switched cars minutes after the robbery.

However, the breakthrough came two days later when officers received a call to say a vehicle had been dumped in a street in Oldham.

Enquiries identified the vehicle as the one involved in the heist and within days the main suspects had been identified.

Prosecutors told a court how mobile phone data proved it was Samantha Farrell-Blake, 44, who had acted as the getaway driver following the robbery.

The court was told how police suspected Shah Almaruf, 19, then drove back to Newcastle in the days after the incident to collect the abandoned Audi.

The five suspects, who all lived in Oldham and Birmingham, were arrested and later charged with conspiracy to commit robbery.

Khan, Almaruf and Askhor admitted their part in the heist but Farrell-Blake and Farooq denied any involvement.

But on Wednesday (December 12) the pair were also found guilty of conspiracy to robbery at Manchester Crown Court. Now all five will be sentenced at the same court in February.

He said: "Robberies like this one are rare in our region as we don't often get travelling criminals targetting the North East.

"The incident itself was over in a matter of seconds but the investigation to put this gang behind bars has taken months of good old-fashioned detective work.

"We have trawled CCTV, used ANPR, downloaded huge amounts of mobile phone data and spoken to hundreds of witnesses.

"Ultimately it came down to one call from a member of the public in Manchester who was concerned about a car that had been left on her street.

"That was the stroke of luck we needed in the investigation and from there the map of all those involved in the conspiracy started to come together.

"We had great assistance from the public but also from our colleagues working in both West Midlands Police and Greater Manchester Police's Serious and Organised Crime Team – their support was invaluable.

"Our only regret is that we were never able to recover the stolen jewellery but this case sends out a strong message to wannabe criminals.

"You may think you can travel hundreds of miles to commit violent crime for your own personal game. The reality is we will always find you and you will end up behind bars."

Superintendent Steve Barron, who helps oversee policing in Newcastle and Gateshead, praised the investigative team and welcomed the result from court.

He said: “This case shows that our region is not an easy target for travelling criminals and that we have a team of investigators who will put offenders behind bars.

“If you step into our region and commit a violent crime like this one then you should expect to be locked up and put before the court.

"I want to praise the investigating officer Detective Constable Patterson and all the officers who have worked tirelessly to bring this case to court. They are a credit to the region and a credit to Northumbria Police.”

Farrell-Blake, of Wynn Street, Birmingham, and Farooq, of Durham Road, Birmingham, all denied a charge of conspiracy to rob but were convicted by a jury.

They were all remanded in custody and will be sentenced at the same court on February 15.

Shakil Hassan, 18, of Collingwood Way, Oldham, was also charged with conspiracy to rob after being accused of driving back to Newcastle with Almaruf in the days after the incident to collect the abandoned Audi.

He denied the charge and stood trial alongside Farrell-Blake and Farooq before being acquitted by the jury. A seventh suspect was arrested during the police investigation but he was released with no further action prior to the trial.

The case has been held in Manchester due to the majority of witnesses and defendants residing in the North West.