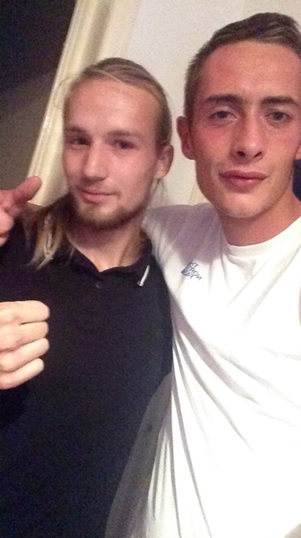 A killer has been convicted today of stabbing his friend in the heart - before walking in to a police station to ask if he was okay.

Daniel Smith, 20, was today (Tuesday) found guilty by a jury of the murder of Jonathan Carr on the evening of July 31 this year.

The pair were described as "the best of friends" and "brothers" during Smith's trial at Newcastle Crown Court.

A jury was told how Jonathan, 21, Smith and their friend Steven Morrison had been drinking and taking drugs at Jonathan's home on Mayfair Gardens in Deckham.

The defendant and the victim then got into a row at which point Smith picked up a kitchen knife and stabbed Jonathan in the chest.

Smith then fled the address before waking the next day and telling his mother he thought he had stabbed Jonathan.

After getting no answer at the address, his mother took him to a police station where Smith told officers he wanted to know if his friend was okay.

The court was told how police then forced entry into Jonathan's home and found him lying dead in the living room of his address.

Smith, of Cotemede, Wardley, was arrested by police and charged with murder. He denied the charge but today (Tuesday) he was convicted by a jury.

The father-of-one is now facing a lengthy jail term when he sentenced by a judge at Newcastle Crown Court in the New Year.

She said: "This is an awful case that has ultimately robbed the world of a 21-year-old man who had his entire life ahead of him.

"His family have been left devastated by his death and have been in court every day of the criminal trial.

"I don't doubt that Daniel Smith cared for Jonathan but he has refused to accept responsibility for his actions that night.

"He stabbed his friend in the heart and then fled the address without raising any alarm, giving him no chance of survival.

"If he loved him like a brother then he would have rang police that evening and handed himself in.

"Now he faces spending the majority of his life behind bars and he will not be around to see his young daughter grow up.

"This has been a tragic case for everyone involved but I hope today's conviction gives Jonathan's family some justice."

Footage shown during the trial showed Smith in an agitated state in the hour before he killed Jonathan.

He was captured on CCTV heavily intoxicated in a local takeaway where he was arguing with staff and his friend Steven Morrison.

The pair eventually leave the shop but further footage was also shown to the jury of Smith assaulting Mr Morrison.

Both men then visited Jonathan's flat before leaving the address a short time later. It was in this "10 minute window" that the 21-year-old was killed.

Smith was later seen wandering about alone at which point a member of the public called an ambulance.

He was treated in hospital for facial injuries during which he told medical staff that he had been assaulted by Jonathan and Mr Morrison.

Smith was discharged in the early hours of August 1 before waking up and confessing to his mum that he had stabbed Jonathan.

During his trial, Smith claimed he had stabbed his friend in self-defence but the jury disagreed and convicted him of murder.

Following his conviction, Jonathan's family also released a statement in which they described him as “a lovely, happy person who was friends with everyone”.

It read: "Jonny was popular and well-liked by his friends. He had a heart of gold and was gorgeous with his friends helping in any way he could.

"It is such a loss and we miss him every day, his smile and his laugh, it is such a hole in our lives as we will never see him again. He was 21 and had the whole of his life ahead of him."