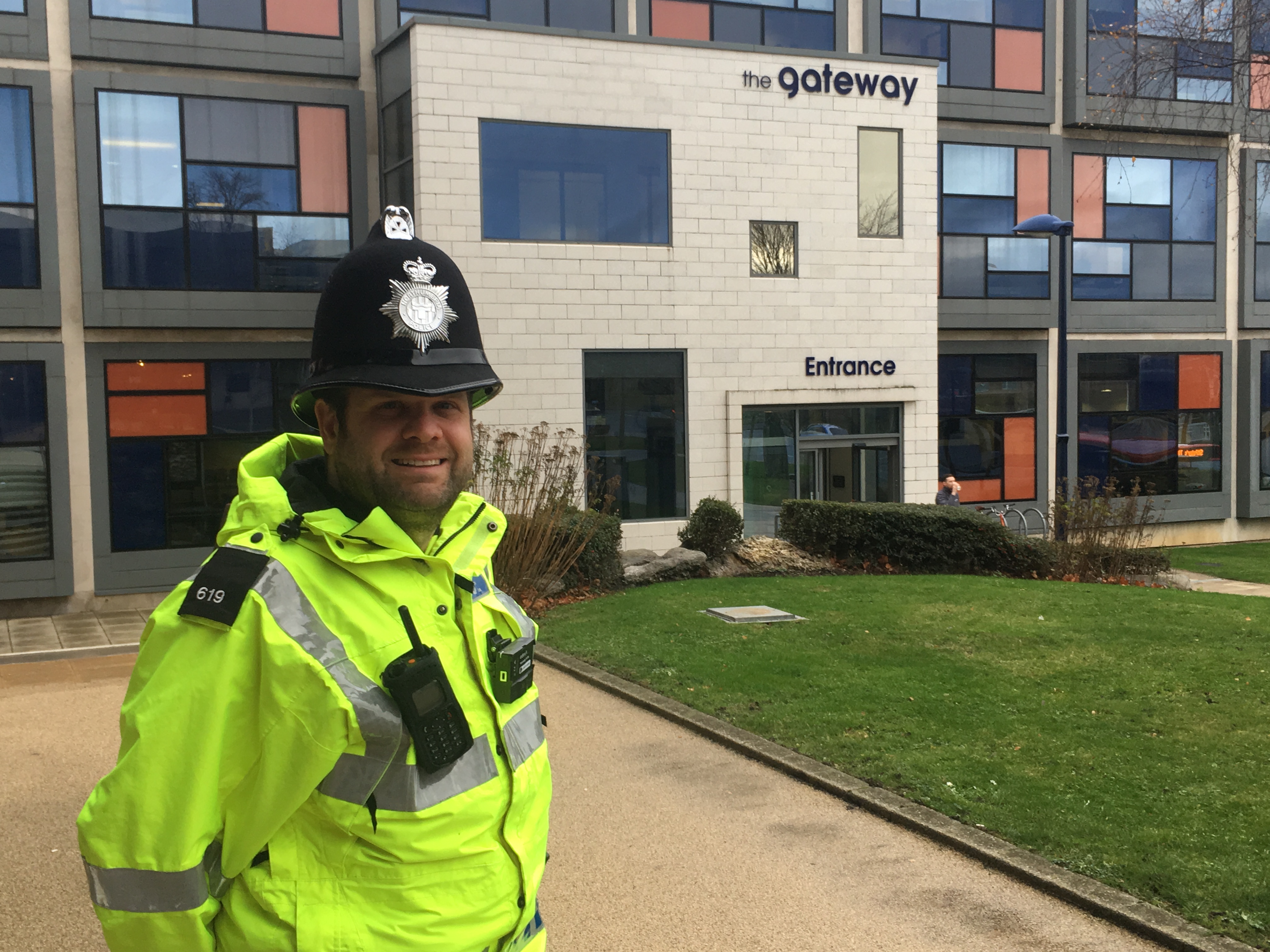 He spent three years as an undergraduate at Newcastle University.

The 35-year-old is one of three designated university officers at Northumbria Police, who offer vital support and reassurance to students, staff and parents.

Based at the University of Sunderland’s city centre campus, PC McGwinn is the friendly face who aspires to ensure teenagers and mature students from all over the world enjoy a safe time in the North-east and keep out of the reaches of opportunistic criminals.

“I’ve been to university and I think it should be some of the best years of your life,” PC McGwinn said. “It’s about having fun, making new friends and enriching yourself both academically and as an individual.

“It would be a crying shame to have your time at university ruined by crime. That’s my job – to make sure students are aware of specific risks but ultimately enjoy their time in Sunderland.

“In some ways it’s an independent role, I’m the only person to work full-time on the Sunderland campuses and you’ve got to drive yourself. But on the other hand, it’s an incredibly interpersonal role which requires a great deal of listening, teamwork and problem-solving.

“This isn’t a job for an introvert, there’s a lot of speaking to do either on a one-to-one basis or at the front of a lecture theatre and I work in partnership with staff at the university to determine how the campuses are best policed.

“I’ve always felt a pride and protection over the area which I serve. I joined Northumbria Police 10 years ago and have worked in Newcastle and Sunderland during that time.

“When I worked in the neighbourhood team in Millfield, I felt personally responsible for that area – and it’s the same at the university now. It feels like a personal insult when a crime does happen.

“So it’s important in my role to influence and work with the university. I suggest things to help reduce and prevent crime, while all the time getting to know people as individuals, both staff and students. In turn, they get to know me as a person rather than just a badge or a number.

“It does make a difference. People often report something directly to me, even if it’s not happened at university, because they know me as a person. Hopefully that helps them recognise they are receiving quality service from Northumbria Police, that they’re being looked after and are understood.”

Having been brought up in East Yorkshire before attending university in the North-east, PC McGwinn understands the difficulties and insecurities that teenagers can sometimes feel when moving to a new city.

But the adopted Wearsider, and now Black Cats season ticket holder, hopes his own experiences can help vulnerable students who are still trying to acclimatise to university life and find their feet in Sunderland.

“For some people, moving to university is their first time away from home, leaving mum and dad, and that transition can be difficult,” PC McGwinn said.

“So it’s crucial that those individuals are supported. Being on your own in a new environment can often lead you to being vulnerable.

“I think staff and students appreciate having me around. I’m based at the university and am here for them.  Quite often people say ‘I’ve seen you around campus’ or ‘you helped me with that issue last year’ and it’s nice when people remember.

“I also work closely with foreign students. There are countries where police forces are perhaps more authoritarian or less willing to engage with the public, so it’s important for me to talk to them, show I’m a friendly person and that they shouldn’t be scared of speaking to police.

“I’ve been in this particular role for just over a year and there’s been some real successes that stick in my memory. I’ve recall a couple of people who had been struggling with harassment issues. At that point, they didn’t know where to turn to.

“So they came to me, and working hand-in-hand with the university’s welfare team and counsellors, the issues were dealt with in a proportionate manner and the harassment stopped.”

While Sunderland is a safe city to live and study, PC McGwinn is not resting on his laurels – and launched Operation Inclusion off the back of the Force’s Fresher’s Week postcard campaign.

It included regular visits to halls of residences and drinking hotspots to reinforce crime prevention advice, brightly-coloured ‘drink spikeys’ were placed in the campus bars to promote safer drinking, and first-year accommodation was kitted out with sensitive shock alarms to deter thieves.

“There isn’t a ‘usual’ week,” PC McGwinn smiled. “But I regularly meet with the university’s security manager to deal with particular issues, and we hold monthly reviews with staff to allow us to assess any trends or patterns that we need to focus on.

“The university is also running a Student Campus Watch society which I’m actively involved with which sees a committed group of people helping to spread those prevention messages. It’s all about having a few extra eyes and ears across the campus, for people to look out for each other.

“I’m very fortunate at what I do and I am incredibly passionate about the North-east.”

PC McGwinn will spend a day off this Saturday, like thousands of other Sunderland fans, cheering on Jack Ross’ side at Accrington Stanley.

Then it’s back to the day job.