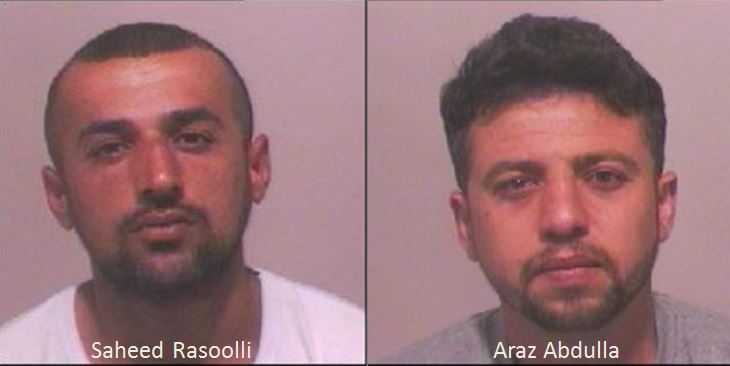 Saheed Rasoolli, 30, and Araz Abdulla, 23, were sentenced at Newcastle Crown Court after being found guilty of rape

Two men have been jailed after raping a woman in a flat in Sunderland.

Saheed Rasoolli, 30, and Araz Abdulla, 23, both attacked the victim in a bedroom of a flat on Roker Avenue in May 2018.

The pair were convicted of rape earlier this month (December) following a two-week trial at Newcastle Crown Court.

Yesterday (Monday), Rasoolli was sentenced to 12 years’ imprisonment and Abdulla was handed a 10-year jail-term.

Chief Superintendent Sarah Pitt, of Northumbria Police, said: “I am pleased that two dangerous offenders have now been taken off our streets following this despicable act.

“Their selfishness caused a great deal of upset and distress to both the victim and the local community as a whole. They must now live with the consequences of their actions.

“Rasoolli and Abdulla both insisted their innocence throughout this case, and their convictions are a result of a huge amount of work by an experienced and dedicated team of detectives who leave no stone unturned to ensure offenders are brought to justice.

“I would like to take this opportunity to praise the victim and her family for the bravery and dignity they have shown throughout this difficult case.

“While no sentence can change the horrific ordeal that the victim has endured, I hope she can now seek some kind of closure following these convictions.”

The court was told how the victim was waiting for a bus in the city centre on May 23 this year when she was approached by Rasoolli.

She was then taken back to a property on Roker Avenue and raped. Once Rasoolli had left the room, Abdulla then entered and forced himself on the victim.

The woman fled to a nearby shop and reported the offences to police.

In an impact statement read out by counsel in court, the victim said: “My whole life has changed as a direct result of that day and what the two men did to me.

“They violated and abused me. They left no physical injuries or scars, but at this moment in time it feels like they have destroyed my life.

“These actions have changed my life. I may never feel happy or positive again.

“They need to understand what they have done to me and how their actions have impacted on my life. They deserve to go to prison for a really long time. I never want another person to suffer like I have because of these two men and their lack of respect.”

Rasoolli, of Hylton Road, Sunderland, was found guilty of rape and sentenced to 12 years jail.

Abdulla, of Roker Avenue, Sunderland, was found guilty of rape and sentenced to 10 years jail.