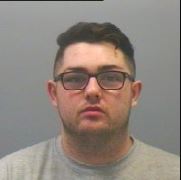 Louis Murray, 22, has been sent to prison for ten years after previously admitting a string of child sex offences.

A hero farmer who helped put a paedophile behind bars for ten years has spoken of his pride at being able to help police secure a conviction.

Trampoline coach Louis Murray, 22, has been sent to prison for ten years after previously admitting a string of child sex offences.

He taught hundreds of children at his trampoline club in Newcastle which is where he met his teenage victim.

But he was caught in a car with the youngster after driving to the remote Northumberland village of Belsay to engage in sexual activity.

Farmer George Common, 59, was checking on his livestock when he found the steamed-up vehicle parked in a lay-by.

He initially thought the occupant was trying to commit suicide by pumping his vehicle with fumes from his engine.

Mr Common leapt into action to try and rescue the occupant but then found Murray engaging in sexual activity with the teenage boy.

He tried to block the vehicle in with his Land Rover at which point Murray rammed the vehicle and fled the area. Police were able to trace his car and he was later arrested.

The trampoline coach, of Blakelaw, Newcastle, admitted the charges at a previous hearing and he was jailed for ten years by a judge at Newcastle Crown Court on Monday.

He said: "Louis Murray was a predatory paedophile who abused his position of trust to befriend and groom a young boy. I am glad that his behaviour has been uncovered and he is now facing a lengthy stint behind bars.

"If it wasn't for the actions of George Commons that day then Murray's victim may have been subjected to abuse for a much longer period.

"Mr Commons was quick to act when he thought someone was in trouble and did absolutely the right thing when he learnt exactly what was going on.

"It was a brave act that has undoubtedly helped prevent a young person from being harmed further.

"George continues to be a key member of our Farmwatch scheme and this case shows that our joint working with the rural community not only prevents traditional rural crime but also far more serious crime too."

Mr Common, whose family has been farming in the region for 800 years, said that he was "proud of himself" for taking action and getting the young boy help.

He said: "I was checking some stock and saw the car parked up there. I carried on checking my stock and then when I came back the car was still there and I thought that something wasn't right.

"I have come across a suicide attempt before where they were trying to gas themselves and I thought to myself I hope they weren't trying to do something like that.

"So I went over to the car and I had a shock with what I saw. I looked in the window and saw Murray sitting next to a naked lad who just looked up at me.

"I just said 'this isn't right' and I opened the door and attempted to grab the arm of the lad. That is when Murray drove off and rammed my car to try and leave. As he was doing it he was saying 'sorry, I just have to go'.

"I would definitely do it again and as it turns out I am proud of what I have done. It could have saved a lot of other lads and saved him from going through anything further.

"But in many ways I am typical of a Northumberland farmer who was just looking after his patch. I have been part of FarmWatch for a while and I would always report something suspicious.

"I have been involved in the scheme from the very beginning and I have always been one for calling the police if I see something that is not right. We are a tight knit community and this shows how much it works."

The judge ordered that Murray must sign the sex offenders’ register for life and also made him subject to an indefinite sexual harm prevention order.

He also ordered that Mr Common be paid £400 from the public purse as a token of gratitude for his actions in bringing Murray to justice.