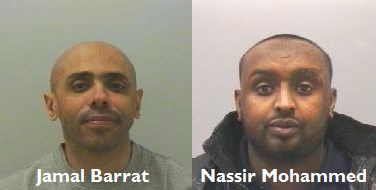 Two men have today (Weds) been jailed for a total of 30 years after a shooting in Newcastle just minutes in to the New Year.

Jamal Ali Barrat, 45, and Nassir Mohammed, 35, are today behind bars after being found guilty of the shooting at an address in Brunswick Village.

The men had got involved in a drugs dispute in the days before the incident and had decided to take matters into their own hands.

In the minutes after midnight of the New Year the pair drove on to Grey Street in Brunswick Village and fired two shots through a letter box of an address.

They then assaulted a male in the street that they were in dispute with and fired a further two shots but luckily nobody was struck by the stray bullets.

The men fled the area in a black VW Golf but it later emerged that they had shot at the wrong house.

An investigation was launched and within 24 hours police had arrested Barrat in connection with the shooting and later charged with a string of firearms offences.

Mohammed was later linked to the crime after extensive inquiries by detectives and was subsequently arrested at his home address in Sheffield at the beginning of February before also being charged.

And today they are facing a significant amount of time behind bars after being jailed for a total of 30 years.

Qadir Mohamed, 28, of Greenland Way, Sheffield, had also faced trial alongside the pair but was found not guilty by the Jury.

Sentencing the pair, Judge Durham Hall QC said that the shooting was a “mission to terrify and frighten”.

He said: “This case concerns very serious and grave offending involving the discharge of 4 rounds from a firearms in Newcastle in the early hours of New Year’s Day.

“I am satisfied this was a mission to terrify and frighten, these are the actions of very dangerous drug dealers.”

Addressing Barrat, he said: “You are a serious drug dealer, you are capable of extreme violence, invariably using a weapon whether a knife or a gun.

“You clearly saw yourself as a powerful serious player, within a 24 hour period as your paranoia and desire for vengeance built you called upon Nassir Mohammed.

“This was a cold blooded plan.”

Addressing Mohammed, he added: “You did not hesitate to lend your services when called upon by ‘your blood’.”

Following the case, senior investigating officer Detective Chief Inspector Alan Cairns said that the shooting was a reckless act by two dangerous offenders which left members of the community shocked.

DCI Cairns said: "This case shows that these two men are a danger to the public and it is lucky that nobody was injured as a result of their actions.

"They had got into a dispute with two persons they knew through their criminal activities and decided that they wanted to take revenge.

"In the end they have ended up shooting at the wrong house and left the occupants of that address absolutely terrified.

"This was very reckless act by two dangerous offenders and someone could quite easily have been killed.

"I want to thank the bravery of all the victims and witnesses who have given evidence in court. You have helped put two violent men behind bars.

“Crimes of this type involving firearms are thankfully still very rare on Tyneside but if anyone does have intelligence about a dangerous offender then please get in touch.”