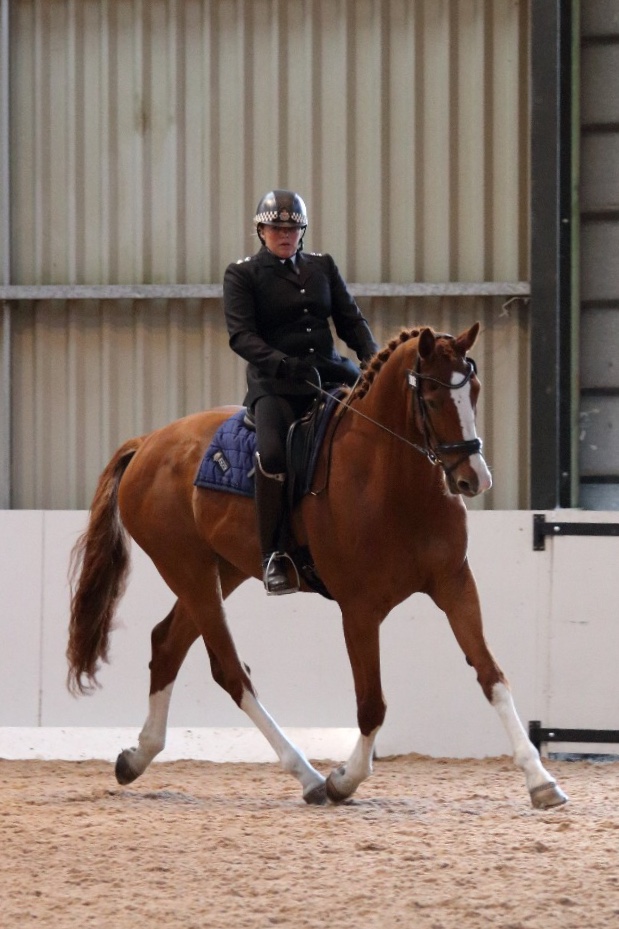 Police inspector to compete in national championship atop a dancing horse

A police inspector is set to compete in a national dressage championship - after her horse danced to The Jungle Book's Bear Necessities.

Lesley Wheatley is a neighbourhood inspector at Northumbria Police where she helps keep residents in north Newcastle safe.

Every day she is tasked with protecting vulnerable people, reducing crime in her local communities and putting criminals behind bars.

But last month she had a very different challenge on her hands - getting a police horse to dance to The Jungle Book in a dressage arena.

Lesley was competing in the British Riding Club's dressage to music qualifier as the representative for Forces Equine.

She competed at elementary level against eight other qualifiers and was awarded first prize atop her seven-year-old horse Furst Lazlo.

The pair's entry was jungle themed and Furst Lazlo, stable name William, danced to Bear Necessities from The Jungle Book and The Lion King’s The Lion Sleeps Tonight.

They will now compete in the British Riding Club Championships this October, the top competition for amateur riders.

Lesley, who has been riding for 40 years, said: "It was a great experience to be able to compete on behalf of the uniformed service and I was delighted to actually come top of my class.

"It was a real honour to not only represent the police but also the military and all the blue light services.

"The competition was tough but William was fantastic and to qualify for the national championships is a dream of ours.

"Our routine always gets a few laughs as it's not every day you see a horse dancing to The Lion Sleeps Tonight!"

Furst Lazlo is a seven-year-old Hanoverian horse that measures in at a mammoth 18.2 hands and lives near to Lesley's home in Gateshead.

Despite his huge stature, he has never considered a career with the police and instead spends his days grazing in the sunshine.

Lesley added: "I love my horses but ironically I have always stuck to foot patrol in my day job and have never been a part of our Mounted Section.

"They were kind enough to lend me some of their kit for the competition and I think William looked the part.

"He's a bit of a softie when it comes to big crowds though so I don't think he has any plans to join me at the police just yet!"

Forces Equine is a national riding club which is for uniform services including military, police and other blue light professions.

Lesley is a brand ambassador for dressage at the organisation and selected to compete as their representative.

Her success means she will now compete in the British Riding Club Championships against other qualifiers from all over the country.

The event will take place at Bury Farm Equestrian in Buckinghamshire on October 20 this year.