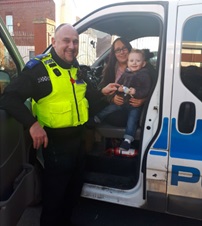 A quick-thinking Police Community Support Officer has been heralded a hero after saving three lives – in less than THREE MONTHS.

CSO David Atchinson is usually tasked with reassurance patrols and liaising with local business owners. But he has been kept busy administering first aid since the turn of the year and has now been dubbed a life-saver by senior officers.

The 58-year-old, who covers Blyth, first leapt into action in January when he spotted a distraught mother trying to assist her two-year-old son, Freddie.

David realised the youngster had started choking on his lunchtime sandwich and so he leapt into action. He quickly began to administer first aid at the Subway store in Blyth and was able to dislodge the food from his throat.

Less than five weeks had passed before David was called into action again in almost identical circumstances.

He was on patrol on Waterloo Road in the Northumberland town when a two-year-old girl began choking on a sweet. Thankfully, it turned out lightening really can strike twice as he was again able to clear the child’s throat.

Then at the beginning of last month David was once again on patrol on Waterloo Road when a woman went into a seizure and he was the first on scene. Again, he was able to administer first aid and stayed with the woman until paramedics arrived at the scene.

Now, the humble CSO has been praised by senior officers who are branding him a life-saver and have even put him forward for a commendation from Chief Constable Winton Keenen.

Chief Inspector Helena Barron, of Northern Area Command, said: “CSO Atchinson is a valuable asset to Northumbria Police thanks to his local knowledge, his ability to identify offenders and his close community contacts.

“He is everything we want in one of our staff and is passionate about his commitment to serving the public and saving their lives. That deserves the highest recognition.

“To save one life is a great thing but to have potentially saved another two lives in such a short period of time shows just how important David is to our team down in Blyth.

“I know that the families of those young children are incredibly grateful to David and I want to personally thank him for everything he has done.”

Following the first incident, Freddie even paid a visit to see David at Blyth Police Station with his mum, Kerry Vincent.

He was given a tour of the station and was also given the chance to sit inside one of the police cars and play with the sirens.

Kerry was unreserved in her praise for CSO Atchinson, and said: “I’m so grateful to David for how quickly he acted, and I can’t bear to think what might have happened had he not been there. He really is little Freddie’s hero.”

Despite his heroics, CSO Atchinson remains very humble about the incidents, saying: “I feel very honoured to receive so much praise, but the truth is I was only doing my job.

“I’m glad I was able to help, but really I just happened to be in the right place at the right time. The important thing is that all of those involved are alive and well, and that’s all the recognition I need.”

CSO Atchinson has been with Northumbria Police since 1987, initially joining the force as a traffic warden deployed in the West End. In 2011, he applied to become a CSO, and has been stationed in Blyth since 2013.