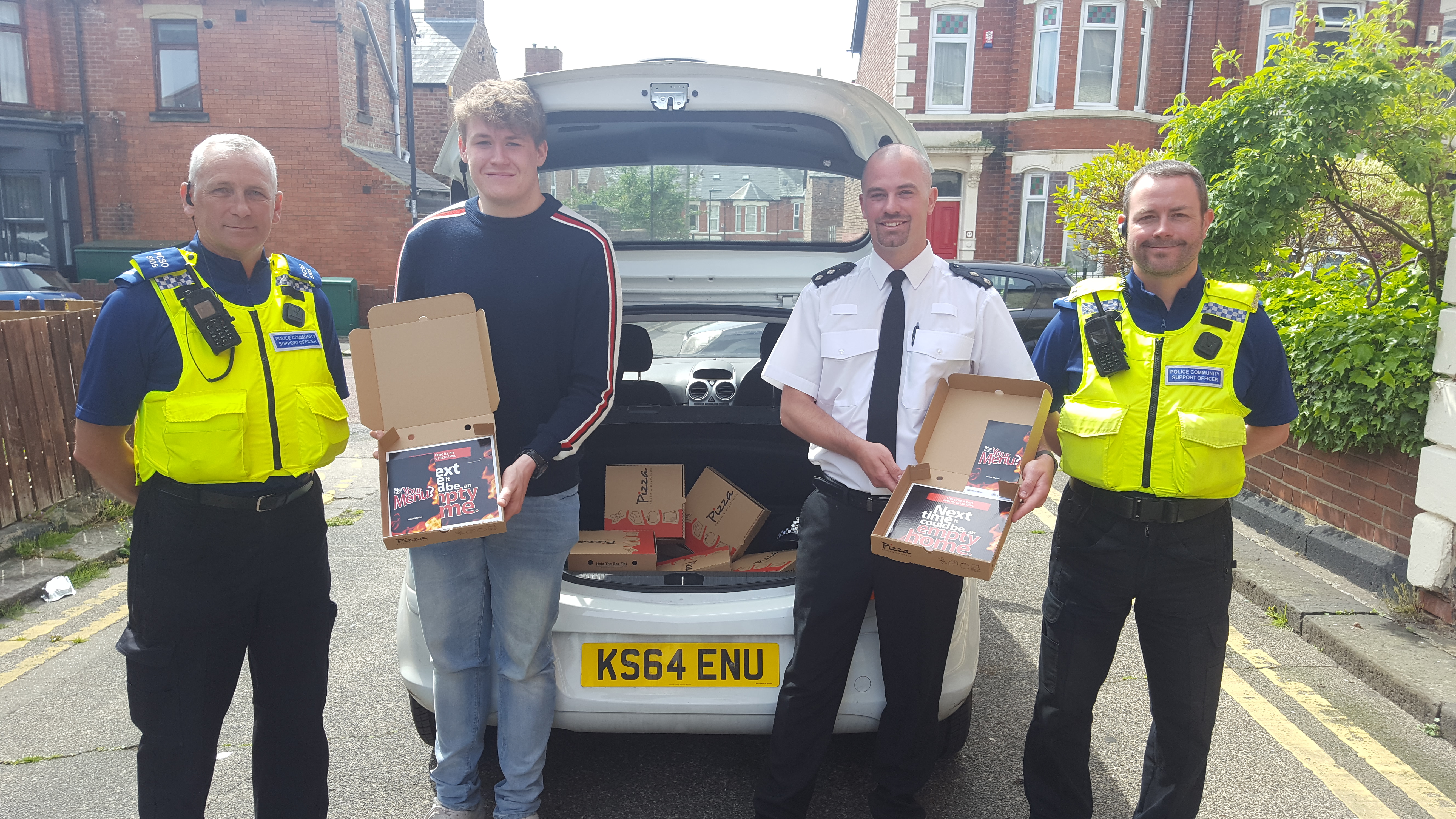 Neighbourhood officers have delivered pizza boxes to student properties who had left their doors and windows opened and unlocked.

Burglaries in the east end of Newcastle have fallen by 80 per cent after police launched a campaign that saw them deliver empty pizza boxes to students.

Two weeks ago Northumbria Police launched their 'Slice of Advice' campaign after recording 32 burglaries in just 30 days across Heaton and Jesmond.

It saw neighbourhood officers delivering pizza boxes to student properties who had left their doors and windows opened and unlocked.

But instead of a piping hot slice of pizza the students would find one simple message - 'this time it's an empty pizza box, next time it could be an empty home'.

They would also find a special takeaway menu packed with crime prevention advice to help stop themselves falling victim to opportunist thieves.

Since the launch of the campaign students in the area have responded positively to the campaign and headed the advice of local police.

And thanks to the co-operation of students, and some proactive policing to target offenders, the number of burglaries in the area has fallen by more than 80 per cent.

Neighbourhood Inspector David Millican has said the pizza box campaign will continue until the end of the academic year.

He added: "Burglaries in this area of Newcastle has been an issue for a number of years with many incidents coming as a result of doors and windows being left open or unlocked.

"Many of the victims were students and have not taken our crime prevention advice on board in the past as it has been just another leaflet through their letter box.

"We decided to try something a little bit different to grasp their imagination and encourage them to think about their home security and personal security.

"We know that students love their pizza which is where the idea of the pizza box came from and that has caused a few laughs on the doorstep.

"There has been a great response from the students so far and the boxes have been a great ice breaker for our officers out on patrol.

"The campaign has been running alongside some targeted police activity which has seen one suspect arrested and charged.

"So far we have seen an 80 per cent reduction in burglaries in the area which shows the pizza box campaign has had a really positive affect.

"We will continue to deliver boxes until the end of term so we make sure as few students as possible are targeted by opportunist thieves."

"Though the risk of burglaries in areas like Jesmond remains high, this is a positive step forward in keeping our students and their belongings safe."

Following the launch of the #SliceOfAdvice campaign a 45-year-old man suspected of committing a number of burglaries in the area was arrested.

He appeared before magistrates in Newcastle on May 19 charged with two counts of burglary and was remanded in custody to appear at Newcastle Crown Court on June 18.