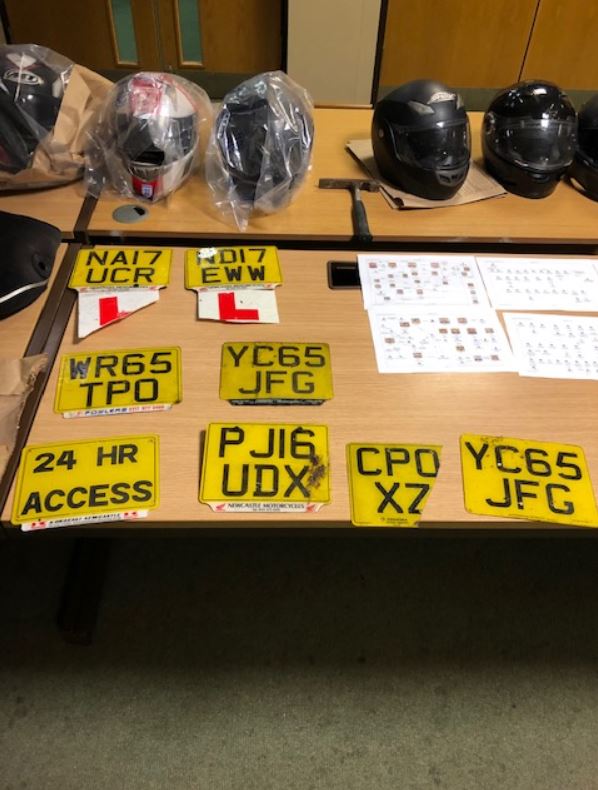 A special taskforce set up to combat motorcycle disorder in the region are continuing the good work after a successful raid at a house in Newcastle.

Last month Northumbria Police revealed the specialist team had been set up to tackle anti-social behaviour and disorder linked to motorcycles.

Investigations had found that a large number of the motorcycles involved were stolen and linked to serious criminality including violence and drugs.

Dozens of people – including juveniles and adults – have been arrested by the team in the crackdown on the disorder.

And those good results continued last week after a man and a teenage boy were arrested following a raid at an address in Scotswood on Tuesday.

Officers executed a warrant at the address on Shaftoe Street after carrying out an covert operation that monitored suspected stolen motorcycles coming to and from the property.

As well as the arrests, police recovered a haul of fake number plates, motorcycles, weapons and a small cannabis farm from inside the property.

Now one of the detectives overseeing the work of the team has reassured residents that the special task force are “not letting up any time soon”.

Detective Inspector Mal Stratton said: “This was a fantastic result that was only made possible through a combination of intelligence from the community and excellent police work.

“The task force has had some fantastic results but this is one of the best so far and should send a message to criminals operating in our region – we are not letting up any time soon.

“These are not cases of bored teenagers having nowhere to ride their motorcycles. We are talking about serious criminality and those involved think they are above the law.

“We set up this team because we knew there was serious criminality linked to what, on the face of it, appeared to be anti-social behaviour and nuisance motorcycle activity.

“Over the past few weeks we have seized significant quantities of drugs, a huge amount of weapons and a host of stolen motorcycles.

“I want to personally thank those residents who have reported intelligence to us and allowed us to put some of those responsible for the criminality before the courts.”

They review every incident where a motorcycle has been used in an anti-social manner and try to establish any patterns of behaviour.

The team will then look to secure warrants on addresses linked to the anti-social behaviour and that has already resulted in a number of significant arrests.

Det Insp Stratton added: “There are a number of different tactics we have been using to identify who they are and a number of people have already been put before the courts.

"We are trying to work with partners to identify diversionary programmes for young people but we cannot let this type of behaviour go unchecked.

"If you know anyone who has stolen a motorcycle or is riding in an anti-social manner then we need you to do the right thing and inform the police.

“We want you to report issues with motorcycle disorder directly to our task force. If it safe to do so then take pictures, take videos and send it to our detectives so we can help make your community a better place to live."

Drugs, weapons, money and stolen property have all been seized by the task-force due to their enquiries into anti-social behaviour. Sixteen people have also been charged with in excess of 26 offences since the task-force was formed.

Following the most recent raids a 16-year-old boy appeared in court charged with eight offences including six counts of being carried on a motorcycle taken without consent, driving without a licence and driving with no insurance. He will appear before magistrates in North Tyneside on December 7.

A 26-year-old man was arrested for conspiracy to steal motorcycles and released under investigation. However, he was escorted to prison after breaching the terms of an existing licence.