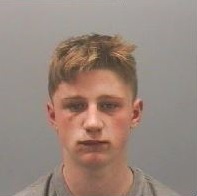 A despicable burglar who ransacked a popular community café set up for new mothers and their babies has been jailed.

Joshua Sullivan, 18, has been jailed for a year in prison after smashing his way into Tots Tea Rooms on Park Road in Wallsend on September 10.

As well as damaging the front windows, Sullivan made off with a coffee grinder and cash – racking up a bill for more than £1,000 in damage and stolen goods.

An investigation was launched and CCTV from inside the cafe soon led officers to identify Sullivan as their main suspect.

The thief was arrested and later charged after a blood sample at the scene confirmed he was the offender.

Sullivan, of no fixed address, pleaded guilty to two counts of burglary at Newcastle Crown Court earlier this month.

He was jailed for a year and also ordered to pay Tots Tea Rooms more than £1,000 in compensation.

Sergeant Jill Hall, of the Wallsend Neighbourhood Policing Team (NPT), welcomed the jail term and said the burglary had a “massive impact” on those who use it.

She said: “This community café is a safe haven for many mums of babies and toddlers in the area - so I think it’s shocking that it would become a target for thieves.

“After the burglary, Tots Tea Rooms was forced to close its doors to customers until the damage could be repaired.

“This would have had a massive impact on service users – some of who get support around mental health before and after having a baby.

“Thanks to the hard work of officers and community intelligence, we were able to secure enough evidence to bring the offender before the courts.

“I’m glad to see Joshua Sullivan has now been convicted at court – and that the café can continue to provide a lifeline to local parents in the community.”

Sullivan was sentenced on November 12 at Newcastle Crown Court.