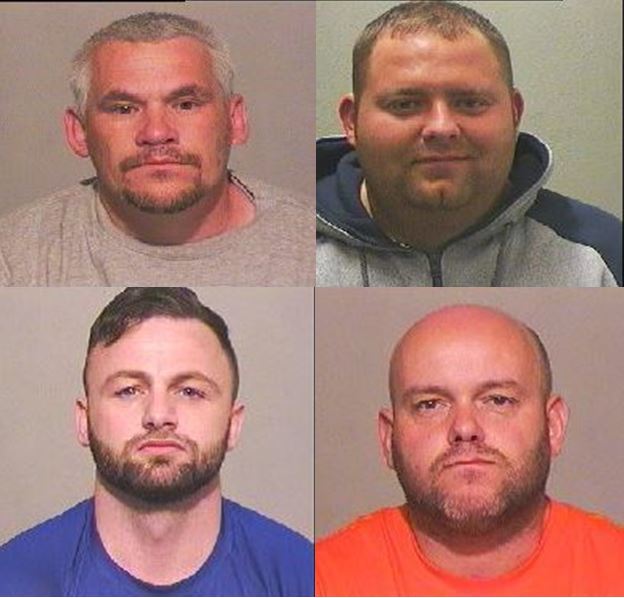 Members of a sophisticated drugs gang responsible for shooting a gun at the front window of a family home have been jailed.

Six shots were fired through the window of a house on Craigshaw Square, Sunderland, in the early hours of September 12, 2016.

Teesside Crown Court heard the early-morning shooting was carried out in revenge for a burglary that had taken place in Hylton Road, Sunderland, a few hours before.

After being convicted by a jury in June 2018, Tony Trott, James Ratcliff and Lee Barnett were jailed for more than 66 years on Tuesday (November 20) for their part in the attack

A fourth man, Philip Steabler, was jailed after he admitted arranging for the destruction of one of the vehicles used in the days following the shooting.

Trott, Ratcliff and Steabler were also convicted for a conspiracy to supply cocaine across the North East.

Chief Superintendent Sarah Pitt, of Northumbria Police, said: “This is a fantastic result which has taken a group of dangerous criminals off our streets.

“These individuals hatched a retaliatory plan to fire a series of gunshots through the front window of a family home. We could so easily have been dealing with a murder enquiry, and their actions that day endangered many people’s lives.

“We are committed to tackling and disrupting serious and organised criminality in our area and these sentences should act as a message to anybody who threatens the fabric and welfare of our society.

“I would like to praise the team of detectives who have worked tirelessly on this case. Their professionalism throughout this complex case has led to these dangerous men today being brought to justice.”

A court heard how ringleader Trott, 30, headed a drugs operation and orchestrated the shooting at the family address, which was believed to have been occupied by members of a rival gang.

Trott was accompanied by Ratcliff, who fired the self-loading pistol, and Barnett on the morning of the attack.

All three denied firearms offences but were found guilty following a trial at Teesside Crown Court.

The court was also told how Trott, Ratcliff and Steabler were each involved in a conspiracy to supply cocaine in Sunderland and Hartlepool.

Police monitored the men's criminal activity for months and observed drug and cash hangovers throughout 2016, the biggest of which involved a sum of £29,000 change hands.

Trott, of South Terrace, Sunderland, was jailed for 26 years with an extended four years on licence for possessing a firearm with intent to endanger life, possession of a prohibited weapon and conspiracy to supply cocaine.

Barnett, 42, of Throston Grange, Hartlepool, was jailed for 16 years after being found guilty of conspiracy to possess a firearm with intent to endanger life and possession of a prohibited weapon

Ratcliff, 35, of no fixed abode, was jailed for 24 years plus an extended four years on licence for possessing a firearm with intent to endanger life, conspiracy to supply cocaine, and assault occasioning actual bodily harm.

Steabler, 41, of Thorndale Road, Sunderland was jailed for 35 months after assisting an offender and being concerned in the supply of cocaine.