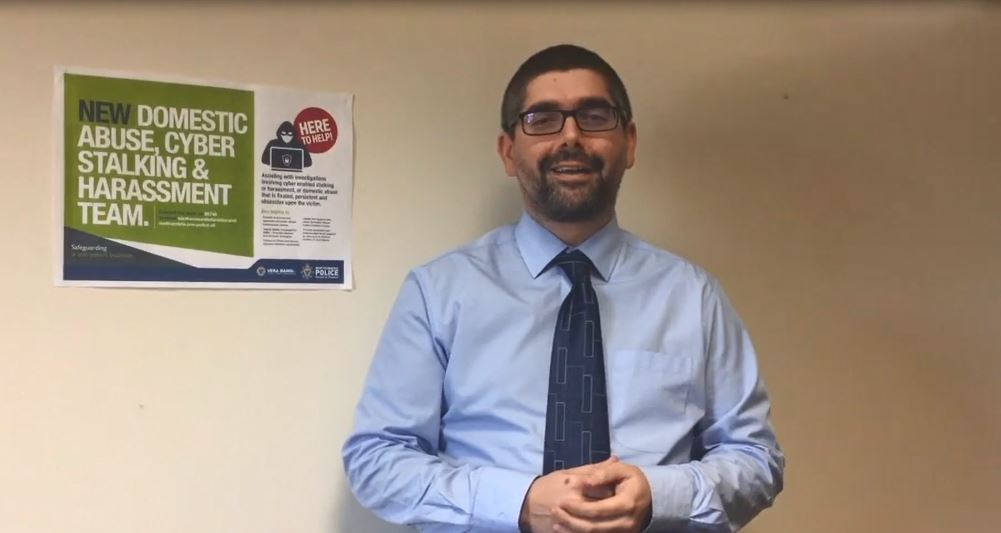 A PC who began his career on the streets of Byker has swapped the beat for the world of social media as he takes on a new role tackling cyber-stalking and harassment.

A PC who began his career on the streets of Byker has swapped the beat for the world of social media as he takes on a new role tackling cyber-stalking and harassment.

Digital Media and Domestic Abuse Investigator Andy Gill is just one of four team members (including a specialist support worker) who make up the newly-formed domestic abusive cyber-staking and harassment team based in Southwick Police Station in Sunderland.

The pioneering team, believed to be the first of its kind, was created in January 2018 with the help of Northumbria's Police and Crime Commissioner, Dame Vera Baird QC, who secured funding for this pilot work through the Home Office Violence Against Women and Girls Transformation fund (VAWG)

Andy began his career in a more traditional capacity, working in the 24/7 policing team in Byker but says he believes his new role is “an essential part of modern day policing.”

He said: “I’m thoroughly enjoying my new role as it’s all about victim empowerment, that’s the main thing we want to achieve. We always aim to help victims get restraining orders as an absolute minimum. We want to take the power away from offenders and give it back to victims - for me, that’s what policing is all about.

“The way we are policing is always changing and evolving. I see myself as quite a technologically aware person and I want to embrace that in my career, not hide away from it.

“This role has allowed me do to that and has given me the tools to catch out offenders by thinking outside the box and using my specialist knowledge of computers, apps, phones and devices to expose their abusive behaviour."

Part of Andy’s day-to-day role is to trace the digital footprints of offenders and victims, searching their devices for anything which could be used as evidence. A typical day could range from downloading data from a standard smart phone to tracking offenders’ IP addresses tracing their locations to searching their emails and messages for incriminating evidence.

In one of Andy’s recent cases, evidence he managed to extract from a victim’s mobile phone proved crucial to backing up her claims she was being stalked and harassed by her ex-boyfriend, who had hacked her email account.

“It does make me feel proud when my work helps secure a conviction,” he said. “Sometimes perpetrators of these crimes are so arrogant and they just don’t think they will be caught. It used to be so difficult to prove when it was one person’s word against another, but now, we can prove that a particular IP address has visited a particular site, and track an individual’s online activity. It’s just a case of us connecting the dots.

“For this particular victim, it was taking over her life. She felt powerless and like she wasn’t in control of her life. We were able to help her prove her emails had been hacked and her phone had been accessed without her knowledge and show her that she wasn’t going mad – she had in fact been the victim of cyberstalking and harassment.”

Dame Vera Baird QC, speaks highly of Andy and the team, she said: “The work Andy and the cyber-stalking and harassment team do is fundamental in tackling stalking, much of which takes place in the context of domestic abuse. It provides a dedicated police approach to the issue and ensures victims get much more targeted support throughout the investigation process. Keep up the good work!”

The DACSH team are currently working across the Sunderland area and have Home Office funding to carry out their work until June 2019.

In the coming weeks, Northumbria Police will be sharing more stories of some of the faces behind the uniform as part of a new feature called #ProudOfOurPeople.

If you feel inspired to consider a career with Northumbria Police, you can visit http://careers.northumbria.police.uk/ to see our current vacancies.