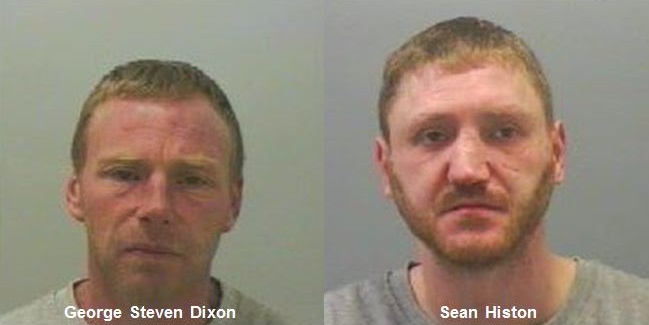 Two killers convicted of brutally beating a man to death - before celebrating the New Year - have been jailed.

Ashley Cochrane was found dying at a hostel in Byker at around 1am on January 1.

He had been punched, kicked and his head was smashed through a plasterboard wall as he waited for a friend to finish work.

The 29-year-old was taken to hospital with broken ribs, a shattered cheek bone and internal bleeding but doctors could not save him.

Police later identified Sean Histon and George Dixon as suspects after trawling CCTV in the area.

Upon examination of their phones police found photos taken at a New Year's Eve party after the “ferocious” attack.

The men were charged with murder but denied being responsible and the case was sent to a trial at Newcastle Crown Court.

But on Tuesday Histon, 32, was found guilty of murder, and Dixon, 38, was convicted of manslaughter.

They have now been jailed as the senior investigating officer in the case revealed it was ‘a brutal attack motivated by addiction and greed’.

Detective Chief Inspector Dave Cole, of Northumbria Police’s Homicide and Major Enquiry Team (HMET), said:  "This attack was described as 'ferocious' by prosecutors and these men are clearly dangerous offenders.

"Ashley Cochrane was drunk and vulnerable at a time when these men wanted money for drugs to celebrate the New Year and when they found him slumped on the doorstep, they decided to take advantage.

"What followed was a brutal and prolonged attack that left Ashley with horrific injuries from which he could never recover.

"He was beaten, stamped on, stabbed and even had his head slammed through a plasterboard wall.

"The first minutes of 2018 would be his last and they were spent in pain and in agony as he was struck time and time again.

"I am glad that a jury recognised how dangerous they are and now George Dixon and Sean Histon have been jailed.

"Their conviction will not bring Ashley back to his family but hopefully it will bring them some justice as they continue to grieve."

During the trial, the court was told how Ashley, of Jesmond, Newcastle, had spent New Year's Eve drinking at The Lord Clyde pub on Shields Road.

By 9.30pm he was asked to leave after getting drunk and falling asleep on a chair.

A friend said he could wait for him at a flat in the Catherine House hostel and that he would meet him after his shift came to an end.

Ashley was sitting outside the property when Dixon came outside by chance and let him in just after 10pm.

When Ashley's friend returned to the property at around 1am he found it had been broken in to and ransacked.

Ashley was so badly beaten he was unrecognisable. Sadly he passed away in hospital having suffered catastrophic head and chest injuries.

A police investigation later identified that attempts had been made to use Cochrane's bank card to withdraw cash and buy cigarettes.

Both Dixon of Shields Road, Byker, and Histon of Mitford Gardens, Wallsend, were also charged with doing acts intending to pervert the course of justice. Dixon admitted the offence. Histon denied the charge but was found guilty on Tuesday.

Yesterday (Thursday) Histon was jailed for life - to serve a minimum of 30 years. He also received a 22 month sentence to run concurrently for doing acts intending to pervert the course of justice.

Dixon was handed 17 years for manslaughter and given a 17 month sentence to run concurrently for doing acts intending to pervert the course of justice.

Paying tribute to Ashley, his mother, Gill Evans, said he will be “forever in our hearts”.

Following the convictions, she said: “Ashley will forever be in our hearts and the verdicts in no way compensates for our loss.

“That said we are pleased that the jury have seen through the lies and excuses these two despicable individuals have attempted in order to avoid responsibility for his death.

“We would like to thank Northumbria Police and the Crown Prosecution Service for their support throughout this time and do take some comfort from the fact that those involved will not be able to harm another innocent person for a substantial length of time.”