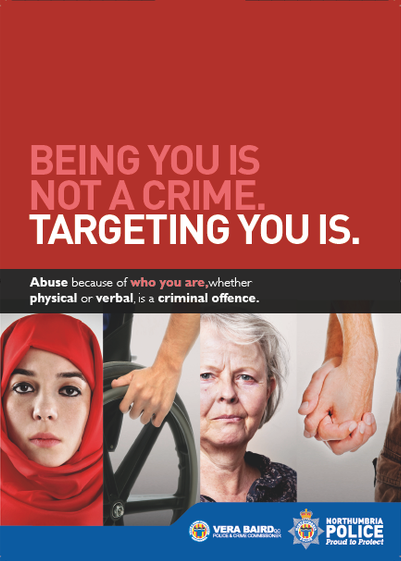 ‘Hate crime will not be tolerated’

That’s the message from Northumbria Police and the Force’s Commissioner ahead of a national awareness week dedicated to stamping out such crimes and raising awareness of the effects on victims.

The vow comes ahead of a jam-packed week of action, which includes special events and guest speakers, to help mark National Hate Crime Awareness Week (NHCAW) which runs from October 13 to 20.

The Force has previously been praised for its positive work in tackling hate crime and currently works with a range of partners including True Vision and Arch to run Safe Reporting Centres for victims. A number of officers have also received special training to support vulnerable victims of these types of crimes.

Assistant Chief Constable of Northumbria Police Ged Noble said: “We are committed to tackling such abhorrent crimes and ensuring victims are supported at every opportunity.

“Being you is not a crime – but targeting you because of who you are very much is and will not be tolerated.

“It is never acceptable to abuse someone because of their race, age, sexual orientation, religion, disability, gender identity or any other protected characteristic and we will stand together to stop this sort of prejudice.

"We have worked extremely hard to give victims the confidence to come forward and our officers have an excellent understanding about what constitutes a hate crime and the additional support which can be provided.”

Dame Vera Baird QC, Police and Crime Commissioner for Northumbria, has further assured the public that hate crime is a top priority.

Commissioner Baird has funded a number of dedicated hate crime advocates to support communities across the region. She also organises advisory panels with representatives from communities who have been targeted to highlight areas of best practice and provide input on where improvements could be made.

She said: “I want to make it absolutely clear – there is no place whatsoever for hate crime in society.

"It’s important that all victims feel safe and supported enough to report these type of offences. There should never be a situation where someone suffers in silence and I want to ensure everyone has a voice.

“I am pleased that he in Northumbria we have specially-trained officers and staff in place to offer all the support that is needed to victims and I would encourage anyone who feels they are being targeted for who they to come forward and work with us.”

There are a number of different ways to report hate crime. There are Safe Reporting Centres across the Northumbria force area as well as via third sector agencies such as True Vision and Tell Mamma and also online.

For info and advice on reporting hate crime, including specific information to access our online 101 form and 3rd party reporting schemes, use:

For info regarding types of Hate Crime use:

A week of action is taking place across the North East in a stand against hate crime and to show victims they will be supported.

From October 13-20, Northumbria Police will be joining forces with a number of partner agencies to mark National Hate Crime Awareness Week through a series of special events.

On Monday officers will put their best foot forward as they stand shoulder to shoulder with those affected by hate crime, a number of support organisations and Gateshead FC to complete a lap of the track at Gateshead Stadium as part of ‘Gateshead Against Hate’.

The event, which is the first of its kind, hopes to be visually impactive with a local theatre group donning pantomime costumes and creating a carnival-style atmosphere.

Northumbria Police Community Engagement Officer Tor Metcalfe, who helped organise some of the numerous awareness events, said: “This week, we are hoping to reinforce the message to everyone that being victimised because of who you are or who people think you are is fundamentally wrong. No one should ever have to experience discrimination, hostility or be treated differently because of who they are.

“That’s why we are walking in solidarity in Gateshead on Monday, hosting a Work Place Hate crime Champion event at St James’ Park on Tuesday, an then on Wednesday we are lucky enough to have some amazing guest speakers at Gateshead Library for an event called ‘Hate crime – Experts by Experience’, including the Paralympian Stephen Miller. These are just a few of the events taking place.

“There are some fantastic opportunities this week for people to come along and celebrate who they are alongside officers from Northumbria Police and councillors.  Being you is not a crime and while we hope you never have to experience what it feels like to be a victim of hate crime, we hope you know you have the full support of the Force should you ever need us. Please do not suffer in silence. We take every report extremely seriously.”

The ‘Walk of Solidarity’ will serve as Monday’s main attraction and hopes to bring people together to #SayNoToHate and show that #BeingYouIsNotACrime.

Northumbria’s hate crime lead Superintendent Nicola Musgrove said: “It is absolutely unacceptable to abuse someone because of who they are and we will stand together to stop this sort of prejudice.

“We have worked extremely hard to give victims the confidence to come forward. We have also seen improvements in how we record hate crime and developed a better understanding among officers about what constitutes a hate crime.

“We know that not everyone feels comfortable in calling 101 and reporting these types of crimes to the police but there are a number of other ways you can report hate crime. We have Safe Reporting Centres across the force area as well as through third sector agencies like True Vision and Tell Mamma.

“If you have been a victim of hate crime we would urge you to come forward. Even if this does not result in a criminal prosecution, you will be supported by our specialist officers.”

Events taking place this week include: