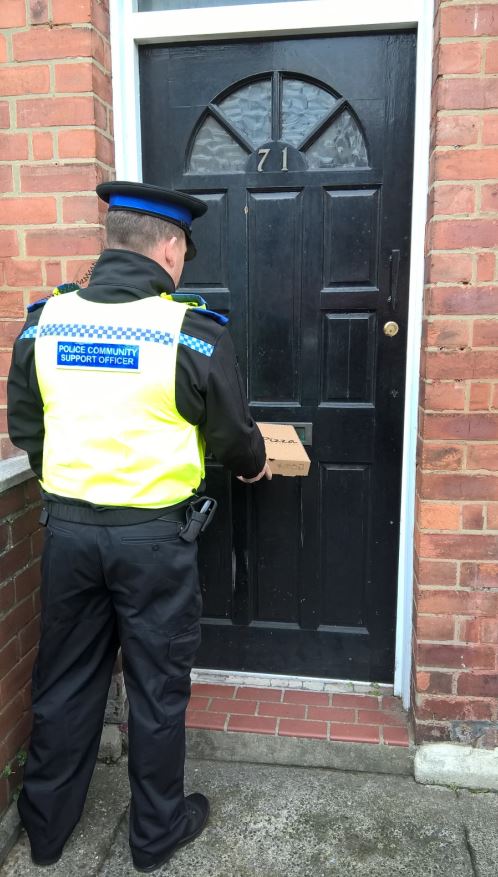 They have only been back a few weeks but students in Newcastle have already been paid a visit by a different kind of pizza delivery man – who tells them to lock their doors!

The new university year is less than a month old but police covering the Heaton and Jesmond areas have already experienced a small spike in burglaries.

A small number of student properties have already been targeted by burglars who have gained access through unlocked windows or doors.

At the end of last year Northumbria Police launched a new campaign to tackle the problem that saw police officers delivering pizza boxes to students in the areas affected.

The pizza boxes contained a takeaway menu containing a host of crime prevention advice and a simple warning message - "this time it's an empty pizza box, next time it could be an empty home".

In light of the recent spike in burglaries, police got back in their van over the weekend and made a new round of deliveries to houses where doors and windows had been left unlocked.

Neighbourhood Inspector Julie Rana said police will continue to work with both Newcastle University and Northumbria University to educate students about how to keep themselves safe.

She said: "Burglaries to student properties is something that has been an ongoing challenge for police in Newcastle for a number of years.

"We have two brilliant universities in the city and our student population is one of the many things that contributes to the fantastic atmosphere that makes it such a great place to live.

"It is very important to us that students feel safe during their time in the Northumbria force area and that they don't find themselves falling victims to crime.

"We have a number of positive initiatives in place to engage with students and we enjoy a great relationship with both the universities.

"However, we do find that many students are still not engaging with police or listening to the advice we provide to them to keep themselves safe.

"When it comes to burglary we can take a number of preventative measures but if students are leaving doors and windows open then they will be targeted by opportunistic thieves.

"This campaign is about trying something a little bit different to get people talking and to engage students so that they can safeguard themselves against burglary."