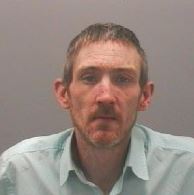 Timothy Mares, has been handed a ten-and-a-half month prison sentence after admitting raiding a house on Knightside Gardens in Dunston earlier this year.

The 38-year-old had targeted the property while the occupants were on holiday and smashed his way through a bedroom window.

When the victim returned from a week away on February 6 she found that her TV, clothes, shoes and handbags had been stolen.

Police launched an investigation and found blood at the scene that they sent off for forensic testing.

Within weeks it identified Mares as the offender, despite him living just a few doors away from the victims.

Officers from Northumbria Police carried out a search of his home and found items including high-heeled boots and a ladies jackets inside the property.

He was arrested and admitted one count of burglary before being jailed for 10-and-a-half months by a judge.

The court also heard that Mares, of Knightside Gardens, Dunston, had been handed a community order for another burglary just two weeks before committing the offence.

Following the case, Sergeant Dave Lumsden welcomed the decision by a judge to put Mares behind bars.

Sgt Lumsden, of Northumbria’s Central Burglary Team, said: “It says a lot about Timothy Mares that he committed this offence just two weeks after being allowed to walk free by magistrates.

“They gave him a second chance to rehabilitate himself but instead he targeted a couple who lived on the very same street as him.

“Thankfully he was stupid enough to leave blood at the scene and it did not take much for us to identify him as the primary suspect in the case.

“He was left with no choice but to enter a guilty plea but he has never fully accepted responsibility for his actions and deserved to be sent to prison.

“Burglary is a very intrusive crime that can have a long-term impact on victims and this sentence sends a strong message to offenders.

“We are specialist burglary detectives and if you commit an offence in our region then you should expect to be put behind bars.”

The woman said in a victim impact statement that she had been left "upset and distressed" by the burglary and "no longer felt safe in her house".