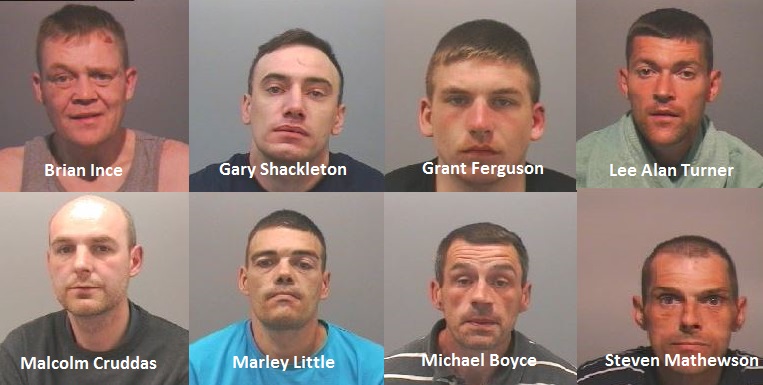 A team of burglary hunters reveal they have reached 1,000 years in jail time

A team of burglary hunters set up to target prolific offenders have today revealed they have reached 1,000 years in jail sentences - in less than four years.

The Central Burglary Team were set up in June 2015 to identify trends and patterns across Newcastle and Gateshead in a bid to take offenders off the street.

Officers in the team review every burglary in the area to see what preventative measures can be put in place to protect residents in the area.

But they also have the important task of investigating crimes, identifying offenders and putting thieves before the courts.

Their work means that those who live and work in the area covered by Northumbria Police are at the lowest risk of burglary compared to anywhere else in the country.

And now the team are gearing up to celebrate their fourth birthday by revealing they have now put criminals behind bars for a huge 1,092 years.

They have secured convictions against more than 500 burglars and also helped secure a further 115 years’ worth of suspended sentences.

Detective Chief Inspector Paul Knox oversees the work of the unit and paid tribute to the hard-working officers and staff who dedicated their lives to putting burglars behind bars.

He said: "Burglary is a horrendous, intrusive crime that does not only financially impact victims but also causes significant emotional trauma.

"Having someone break in to your home, a place that is supposed to be a safe haven, is something that can ruin your life.

"Taking burglars off the street has always been a priority for police but this team of burglary hunters have really stepped it up a gear.

"They have adopted a really smart way of dealing with thieves and review every single burglary that takes place in Newcastle and Gateshead.

"They also have a list of prolific offenders and tap in to the local knowledge of neighbourhood teams to identify potential suspects.

"It means whenever a burglary is committed we can act quickly to identify the person responsible and put them before the courts.

"The level of sentences we have got as a result of this is very impressive and to put burglars behind bars for more than 1,000 years is an incredible achievement.

"To add to that, the risk of household crime like burglary is at its lowest level since 2007 and the lowest of any force in the country.

"This should reassure the public that we are doing everything we can to get ahead of prolific offenders and make it as difficult as possible to commit crime in our region."

Their sole aim is to stop burglaries from happening and arrest those responsible for committing them. Every burglary that happens in Newcastle and Gateshead gets looked at by the team.

Similar teams have also subsequently been set up in other areas of Northumbria Police as a result of the success.

Some of those burglars snared by the team in 2018 include:

- Marley Little, 39, of The Crescent, Throckley, was jailed for three years six months.

- Brian Ince, 44, of no fixed abode, was jailed for three years.

- Steven Matthewson, 46, of no fixed abode, was jailed for two years eight months.

Anyone who has information about burglars operating in the area can contact them by calling 101 or emailing central.intelligence@northumbria.pnn.police.uk.