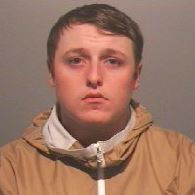 Jack Barrass, 19, has been sent to prison for nine months after being caught by police in possession of the knife on March 24.

The teenager had called police to claim that he had witnessed a man waving a knife above his head outside an address on St James' Crescent in Benwell.

When police arrived at the address they spotted a man who matched the description of the person carrying the blade.

Officers approached him and carried out a stop and search at which point the man admitted he had a knife tucked into his trousers.

He told police his name was Jack Barrass and admitted that it was he who made the call to police.

Barrass was later charged with possession of a bladed article and was jailed for six months by magistrates the day after his arrest.

However, a court was told that Barrass was already subject to a nine month suspended prison sentence for the exact same offence just five months before.

As a result he was committed to prison for nine months when he appeared before Bedlington Magistrates’ Court last month.

Following the case, Neighbourhood Inspector Alan Davison criticised Barrass and said he could have diverted officers away from other victims who needed their help.

He said: "Carrying a knife in public is a serious offence regardless of the circumstances.

"If a person is in possession of a knife then there is always a chance that it could be used to do serious injury to another person.

"Even if the calls are just a prank, they require an immediate police response and that puts a strain on our resources.

"It means officers are having to attend the scene to place him under arrest when they could be helping other victims of crime.

"I am glad the courts have taken this incident so seriously and that Barrass will now spend the next few months behind bars.

"This sentence should act as a strong deterrent to anyone who thinks it is acceptable to carry a knife in public or make a hoax call to police."

Barrass, of St James' Crescent, Benwell, was also made to pay a £115 surcharge to fund victims' services.