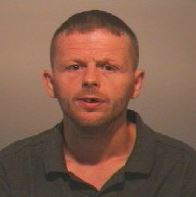 A burglar who raided the homes of a vulnerable pensioner and an elderly double-leg amputee has been jailed.

Shaun Schorah has been jailed for three years for burglaries at two properties in Byker on the same evening last November.

The 39-year-old first targeted a property on Matthew Close, entering through an unlocked front door.

It was the home of an 84-year-old woman who had battled cancer and was a double-leg amputee but thankfully she was not home alone.

Her grandson was with her when Schorah entered the property and he confronted him in the hallway before chasing him out of the house.

The thief was able to flee but just minutes later he sneaked into a house on Heaton Walk just 100 yards down the road.

He was quickly disturbed by a 70-year-old woman who found him coming out of her bedroom after she went to investigate a strange noise.

She called her brother, who lived in the address but was upstairs at the time, and he came downstairs and jumped into action to detain the burglar.

A court was told how police arrested Schorah in the house and later found him in possession of a mobile phone that he had taken from the bedroom.

Officers began to carry out enquiries and he was quickly identified as being responsible for the attempted burglary at the property on Matthew Close.

The thief was eventually charged with one count of burglary and one count of attempted burglary in connection with the two raids on November 20.

Schorah, of no fixed abode, admitted both offences and at Newcastle Crown Court on Friday (April 5) he was jailed for three years.

Sadly, the 84-year-old victim from Matthew Close passed away before seeing the thief put behind bars.

In a victim impact statement read out in court, the 70-year-old occupant of the address on Heaton Walk said she had recently undergone heart surgery and the break-in could have had "serious consequences" for her health.

She said: "I would like to say that I am shocked and upset by what has happened. I had heart surgery in March 2018 and shocks like this could have serious consequences for my health.

"I was terrified when I saw the male and afterwards was physically shaking with the shock of it all. I am just glad my brother was at home and I had someone to help me.

"I am disgusted that someone can just walk into my home when I am in and try to steal from me."

Detective Constable Stuart Taylor, of Northumbria Police's Central Burglary Team, praised the victims and said Schorah was the "lowest of the low".

He said: "Shaun Schorah has targeted the homes of two very vulnerable women who have been left very shaken by what has happened.

"The properties he targeted were in an area that is well known to be home to elderly residents and it is clear what his motive was on that night.

"He was looking for any properties that were left unlocked and once inside he planned to take anything he could get his hands on.

"Thankfully he was only able to steal one mobile phone that was later seized by police when he was taken in to custody.

"I want to praise the residents who were targeted by this thief and particularly the occupant of Heaton Walk who detained him before police arrived.

"His actions have helped us take an opportunistic thief off the streets of Newcastle and put him before the courts.

"I hope this sentence brings some comfort to the victims of his crimes and that they can sleep more easily knowing he is behind bars."

Schorah appeared before Newcastle Crown Court last Friday (April 5) where he was jailed for three years and made to pay a victim surcharge of £170.