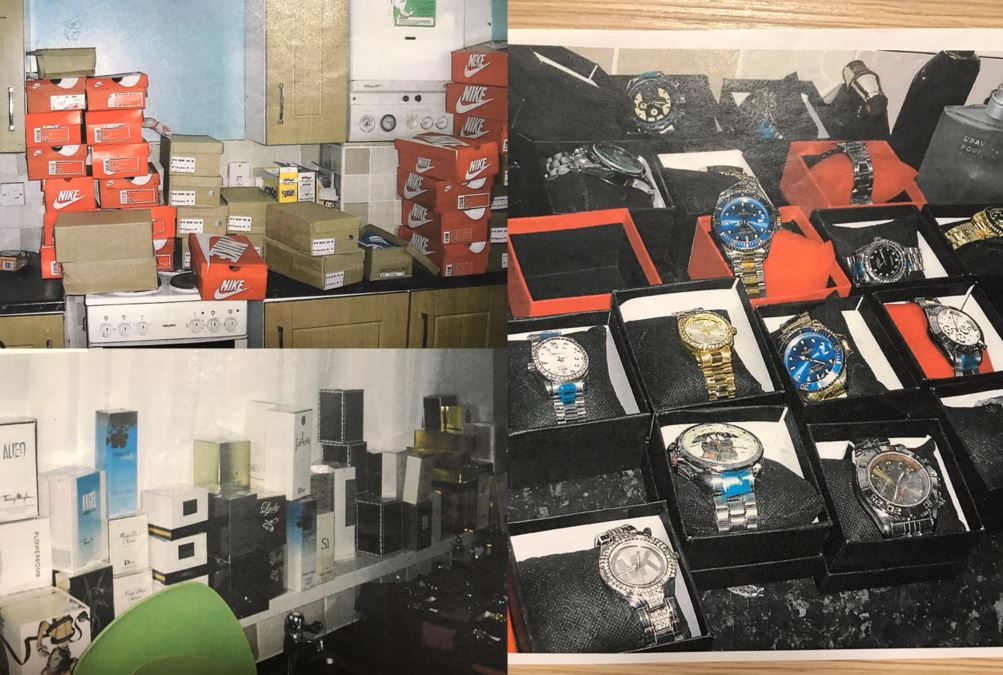 More than 1,100 counterfeit items were seized from Kelly Trott's address in Sunderland, including Rolex watches and Nike trainers

A counterfeiter who turned her house into a “shop” which sold fake designer clothes and potentially deadly cigarettes has been convicted.

Kelly Trott, 38, packed out her Sunderland home with a stash of more than 1,000 counterfeit stock items.

Among the items seized were clothes bearing fake labels such as Calvin Klein, as well as dodgy Rolex watches and Nike Air Max trainers.

A number of potentially harmful, fake cigarettes were also found inside Trott’s Cheltenham Road premises as part of the joint investigation between police and Sunderland City Council’s Trading Standards.

Yesterday (Tuesday), Trott appeared before Newcastle Crown Court and admitted six offences of unauthorised use of a trademark and three of failing to comply with Health and Safety requirements of product safety.

She was sentenced to 10 weeks imprisonment, suspended for 12 months, with 150 hours' unpaid work and rehabilitation requirements.

Detective Sergeant Pete Barclay, of Northumbria Police, said: "Some people may think the selling of counterfeit goods is a victimless crime, but quite often these goods are a product of organised crime.

"Groups can often supply them into the region with the purpose of making money, which enables them to then continue to fund illicit activities.

"As a Force, we are committed to pursuing criminals and protecting our communities as part of Operation Sentinel, which is our collaborative approach to tackling serious and organised crime, and we will continue to work with partners to prevent and disrupt these groups."

The estimated loss to designer industry and the HM Treasury was estimated to be as much as £150,000.

Chief Executive of Sunderland City Council, Patrick Melia, added: "Counterfeiting is not something to be taken lightly, the proceeds often go towards funding organised crime, and the illegal ingredients used in counterfeit cigarettes and alcohol are potentially fatal.

"This prosecution would not have been possible without the help of those who first reported their concerns to us, we need our residents to be our eyes and ears in the community.

"We hope the severity of the sentence imposed by the court sends out the strongest possible message that we will use all available resources to investigate, and all the enforcement powers at our disposal, to pursue and prosecute anyone involved with the illegal sale of counterfeit goods."

The court was told police and trading standards received a tip-off that Trott was selling counterfeit goods from her home and on Facebook.

As a result, officers executed a warrant to search the address in November 2017 and found counterfeit goods in every room of the property, except the toilet.

Prosecutors also revealed around 1,400 packs of fake cigarettes were also found in the house, that when later tested, posed a risk as they continued to burn when discarded.

A number of order books and delivery boxes, with items bagged up and ready to be distributed to customers, were also discovered.

Trott admitted a total of nine offences on the basis that she had not set up the counterfeit operation and was not the driving force behind it.

Yesterday, she received a suspended sentence.