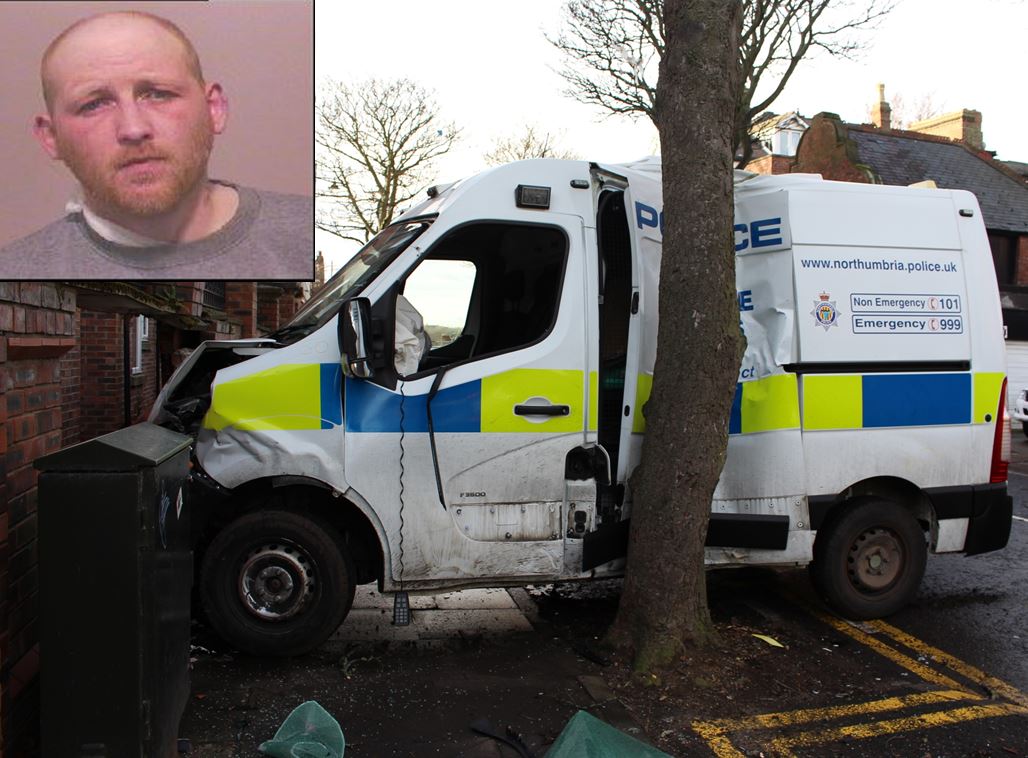 John McCabe, 31, of Sunderland admitted causing serious injury by dangerous driving, driving whilst disqualified and failing to stop after an accident.

A dangerous driver who left a police officer with glass shards in his eye after causing a trail of destruction has been jailed.

John McCabe, 31, has been convicted of a string of driving offences after his erratic behaviour behind the wheel on December 30 last year.

McCabe, without a driving licence and disqualified, dragged a female police officer down the road and almost ran over her male colleague while attempting to evade capture in Sunderland.

He then ploughed his vehicle into the side of a police dog van as he made a bid for freedom – leaving an officer with serious chest and eye injuries.

The defendant admitted eight charges at Newcastle Crown Court on January 29, including causing serious injury by dangerous driving, driving whilst disqualified and failing to stop after an accident.

Today (Monday), he was back in the dock and was jailed for four years and 10 months as a result of his dangerous actions. He was also banned from driving for 10 years.

Sergeant Alan Keenleyside, of Northumbria Police’s Motor Patrols Unit, said: “It’s hard to underestimate just how fortunate we are that nobody died as a result of McCabe’s actions that day.

“He put his life and the lives of others in danger by flouting the law and showing a total disregard to other motorists and police officers. He struck fear into those innocent members of the public who inadvertently came into his path.

“When confronted by police, McCabe then attempted to evade capture by driving off – dragging one officer down the road and almost running over another.

“He then caused serious injuries to an officer on my team by crashing into a police dog van, which resulted in the handler being ejected out of the window upon impact, suffering numerous broken ribs and glass shards lodged into his eye.

“I hope this sentence sends out a strong message to others that dangerous driving offences are incredibly serious, and we will vigorously pursue perpetrators and bring them to justice.”

At about 11am on December 30 last year, police received a report of dangerous driving on Hylton Road. Officers were deployed after a silver Vauxhall Corsa – driven by McCabe – had collided with another vehicle. Thankfully, nobody was injured.

However, McCabe, of Fordenbridge Road, Sunderland, made off and went on to crash the vehicle into a garage in the Gorse Road area of the city.

There he was met by two police officers – one of which attempted to arrest him. However, McCabe managed to force the Vauxhall Corsa into reverse, subsequently dragging the female officer along the road and almost ploughing into another PC.

Shortly after, as he continued his destructive journey, McCabe careered off a back lane and smashed into a police dog van.

The ferocious impact of the collision saw the officer – a dog handler – ejected through the window of the vehicle, suffering three broken ribs and shards of glass in his eye as a result.

Sgt Keenleyside added: "A police dog and two puppies were also in the van at the time of the collision.

"It is with great regret that the two puppies  – an eleven-month-old German Shepherd called Rossi and a seven-month-old Cocker Spaniel named Kassie – have both been retired from service due to the injuries they sustained in this incident.

"Whilst not particularly serious in nature, their injuries and experience in the incident have resulted in them now not being suitable to complete the rigorous training that is required to become police dogs with Northumbria Police.

"Rossi and Kassie both displayed huge promise as puppies, and they will now be re-homed to spend the rest of their lives in loving family environments."

McCabe and a female passenger were both taken to hospital with serious but non-life threatening injuries after officers managed to free the pair from the wreckage. He was later arrested and subsequently charged with a number of driving offences.

Today, he was jailed for 58 months during a hearing at Newcastle Crown Court.