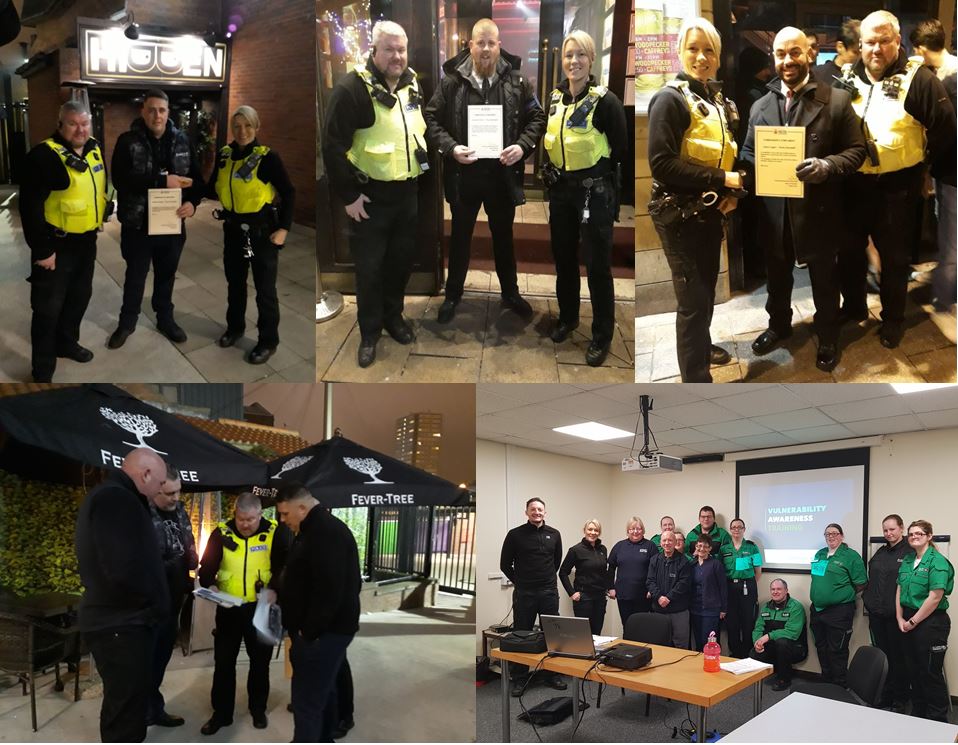 Officers in Sunderland deliver vulnerability training to door staff, licensees and other city centre partners - and it's reaping rewards

Anthony Hopper, Andrew Charlton and Jason Logan have all been presented with Commanders’ Compliments in recognition of their outstanding contributions in Sunderland’s night-time economy.

Officers work alongside city centre door staff every weekend to protect the public, safeguard those enjoying a night on the tiles and tackle any crime or anti-social behaviour.

But as well as watching over those inside the city’s pubs, bars and clubs, door staff also identify vulnerable individuals leaving their premises – and help police keep them away from harm.

In recent weeks, police have been alerted to three separate incidents that all had the potential for somebody to suffer harm or injury.

However, the quick-thinking actions of door staff stopped each from escalating.

Mr Charlton helped to stop an intoxicated woman from going home with another reveller, Mr Logan intervened to prevent a potential domestic-related assault and Mr Hopper helped detain a man found to be in possession of an offensive weapon.

After successfully dealing with each incident with police, the three door staff were presented with a commendation by neighbourhood Sergeant Maria Ord, on behalf of area commander Chief Superintendent Sarah Pitt.

Over the coming weeks, further commendations will also be delivered to others who helped deal with the incidents.

Sgt Ord said: “Our officers enjoy a fantastic relationship with those who work in our night-time economy and that helps us to protect the public and tackle any troublemakers effectively.

“Our work in the city centre is not just about reacting to incidents, it’s also about preventing them from happening in the first place – and that’s why it was important for these three individuals to be recognised.

“Every month, we deliver vulnerability training for door staff, licensees and other city centre partners to educate them on how best to identify and safeguard people who may be vulnerable for a number of reasons, and who could therefore become more likely to be a victim of crime.

“We also have our successful Pubwatch scheme which is a brilliant example of partnership working. It allows premises to share information with other licensees about drunk or rowdy customers, and members can also use their radios to report and identify perpetrators to police.”

Chief Superintendent Sarah Pitt was also quick to highlight the importance of police working alongside licensees, door staff and partners to ensure the city remains a safe place for residents and visitors to socialise.

“We are incredibly fortunate that Sunderland has such a vibrant night-time economy, with a number of pubs, bars and restaurants for people to be able to socialise in,” Chief Supt Pitt said.

“It is also a very safe city, and that is as a result of our ongoing work with licensees, door staff and the local authority who share information and resources to protect those who are vulnerable and deal with any offenders appropriately and robustly.

“The overwhelming majority of people who head into our city are well-behaved and do so with the sole intention of having a good time. However, like anywhere, the behaviour of a few individuals can sometimes spoil it for the rest.

“It is therefore incredibly important that we continue to work hand-in-hand with those who work in our night-time economy and partners to deal with any issues that arise, but also prevent them from happening in the first place.”

Chief Supt Pitt added: “This year, Northumbria Police are campaigning for people to think differently about vulnerability. We’re asking for the public’s help to look out for people who might be vulnerable – whether that’s friends, neighbours or people they see on a night out in town.

“We rely on your information to help us identify those who might need our help. So if you think somebody might not make it home safely from a night out, please tell a nearby police officer, door staff or a street pastor.”

Nik Chapman, who runs The Cooper Rose and chairs Sunderland’s Pubwatch scheme, said partnership working in the city centre continues to go from strength to strength.

He said: “The Pubwatch scheme sends out a clear message that criminality and anti-social behaviour will not be tolerated in our licensed premises.

“It allows premises to share information with other licensees about drunk or rowdy customers, and members can also use their Pubwatch radios to report incidents and identify perpetrators to police.

“Over the years, we have built a strong relationship and developed a greater understanding with other licensees, the police and the local authority. That, in turn, helps us work together to tackle any issues in the city centre.

“The benefits of this scheme are on show every weekend, and we also work closely with door staff who play a crucial role in dealing with troublemakers and protecting individuals who are vulnerable and in need of support.”