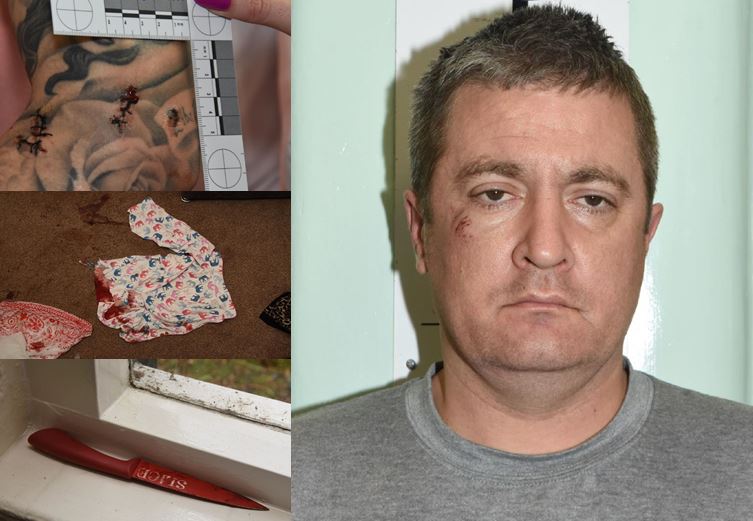 A knife-wielding menace who tried to kill his partner by stabbing her more than 30 times has been jailed.

John Forajter, 41, carried out the frenzied attack on his girlfriend of three months at her Sunderland address in October last year.

After returning from a night out, the couple were involved in a blazing row. In a fit of rage, Forajter then grabbed a knife and stabbed his partner multiple times in the back, chest, neck, arms and legs.

Bleeding heavily, the naked victim managed to escape her flat and get the attention of a neighbour, who subsequently rang 999. She was taken to hospital for emergency treatment.

Today (Thursday), following a four-day trial, Forajter was found guilty of attempted murder by a jury at Newcastle Crown Court.

He was subsequently sentenced to 16 years' imprisonment.

Detective Constable Karen Butterworth, of Northumbria Police, said: “This was an absolutely horrific attack that left a terrified woman with more than 30 stab wounds.

“There can be little doubt that John Forajter tried to kill his victim that night. He subjected her to a truly harrowing ordeal in her own home in what was a sustained and unprovoked attack against someone he was meant to care for.

“Knowing the severity of his crimes, he then ran – leaving her bleeding in the corridor – before he was found nearby by police and arrested.

“His victim has showed incredible bravery after being put through this unimaginable torment, and I would like to pay tribute to her. I sincerely hope today’s conviction can offer her some kind of closure and allow her to move on with the rest of her life.

“We are committed to bringing violent offenders to justice, and Forajter is clearly a dangerous individual who lost control and inflicted a huge amount of damage and pain during an inexplicable fit of rage.

“He must now face the consequences of his conduct that night and live knowing the hurt and anguish that his actions have caused.”

The court was told Forajter and his victim had been drinking at the Guide Post Inn on the evening of October 26 last year, before he was asked to leave by staff for being too intoxicated.

However, despite repeatedly requesting that his girlfriend left with him, she remained in the pub for another 90 minutes before returning home to her flat in Sunderland.

Shortly after 11.15pm, Forajter attended her address and a blazing row ensued. The attacker then grabbed a knife from the kitchen and set upon his terrified partner, who was in the process of putting on her pyjamas.

After suffering more than 30 stab wounds, the naked victim managed to escape the flat and desperately banged on the door of a neighbour, who rang 999.

The knife which Forajter had used during the brutal attack was later found by officers.

As his girlfriend frantically pleaded for help, the blood-stained assailant fled the scene but was later apprehended by officers on Ryhope Road. He was subsequently charged with attempted murder.

Forajter, of The Sanderlings, Ryhope, admitted assaulting his partner but denied that he had attempted to kill her.

However, following a trial at Newcastle Crown Court, today (Wednesday) he was found guilty of attempted murder and sentenced to 16 years in jail.

In an impact statement read out in court, his victim said: “Since the attack I have been diagnosed with PTSD which gives me nightmares about what happened to me. I also wake up in sweats.

“As a result of my physical injuries, I have no feeling in my left ear and down my left arm. I have a lot of muscular and back ache as a result.

“My life will never be the same again as a result of this attack.”