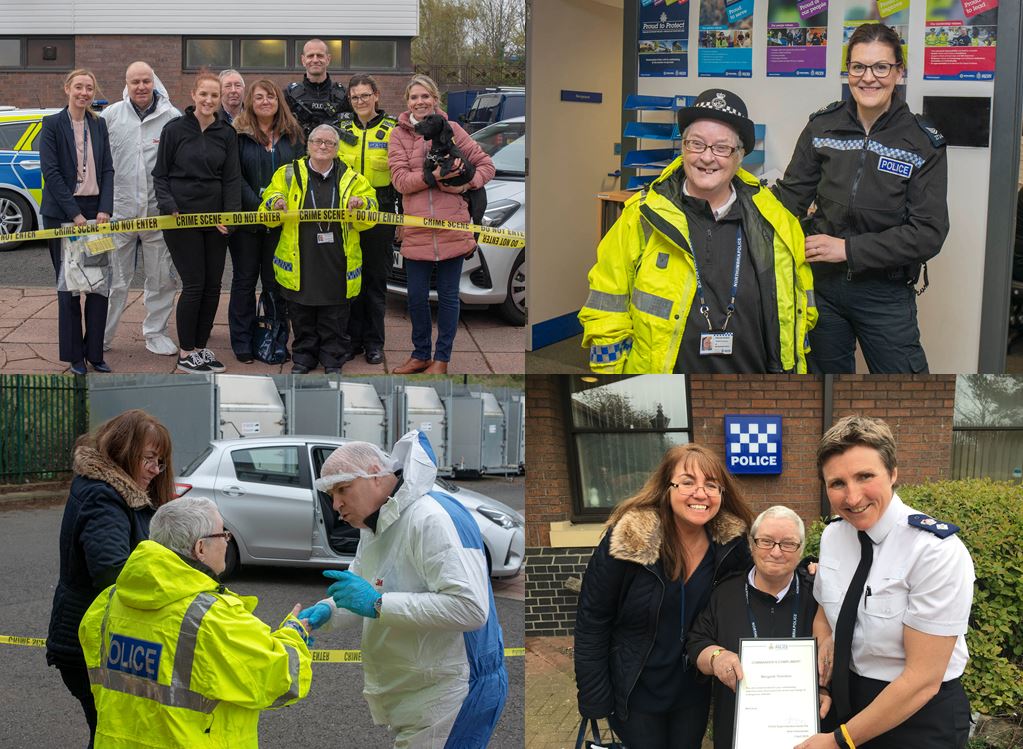 Margaret Thornton, 70, of Sunderland has terminal cancer and had always dreamt of being a detective for the day

A lovable pensioner cracked the case as she became detective for the day and ticked another item off her bucket list.

Seventy-year-old Margaret Thornton, who has terminal cancer, grew up wanting to solve some of the region’s trickiest crimes.

And her dream became a reality this week after off-duty officers gave up their rest day and set up a mock crime for the charismatic Sunderland resident to solve.

After visiting the scene of a fictitious hit and run, Margaret was assisted by forensic teams and the Dog Section to successfully track down the suspect, arrest him and conduct an interview in custody.

She was then given a tour around Millbank Police Station, in South Shields, and was presented with a special commendation by Chief Superintendent Sarah Pitt following her crime-cracking heroics.

“I always wanted to be a detective, ever since I was young,” said Houghton-born Margaret, who now lives in Hendon.

“So today was a dream come true.  I’ve already flown in a helicopter, so being a detective was the next thing I wanted to tick off on my bucket list. I now want to ride in a hot air balloon!

“I’ve been telling all my friends about being a detective and coming into the police station. I’ve been excited for weeks.

“I had an absolutely brilliant day, I loved all of it and everyone was so kind. I can’t thank everybody enough for making it happen.”

She jumped into the fire engine and learnt how to use the hose, before she received her police uniform for the day acting as ‘Detective Constable 48’ – the year she was born.

Eager to do her bit, Margaret then received a radio request to attend a mocked-up suspected hit and run at Viking Park, Jarrow, and travelled to the scene in a marked police vehicle.

Her investigative instincts then kicked in, assessing the ‘crime scene’ with the support of the Force’s forensic team, before a search of the vicinity saw her discover a suspect hiding nearby.

With footprints obtained at the scene and evidence taken from inside the car, Margaret travelled to Millbank station and interviewed the fictional suspect, who works for the Force’s community engagement team based in South Shields.

Under the weight of evidence she had assembled against him,  the suspect admitted the offence and was ‘charged’.

Chief Superintendent Sarah Pitt, of Northumbria Police, said: “Margaret is a wonderful woman, and that’s why our officers were so keen to give up their day off to make her dream a reality.

“She showed outstanding detective work which led to the arrest and charge of the ‘offender’, and I’m sure she’ll never forget her day in the Force.

“I’d like to thank my team who showed such willingness to help Margaret have an unforgettable day, as well as our partners at Northumberland, Tyne and Wear NHS Foundation Trust and Tyne & Wear Fire & Rescue Service.

“Their kindness helped produce an unforgettable experience for a wonderful woman, who made a lasting impression on us all.”

There was also time for pictures with Russell, the Southern Area Command community engagement dog, before hanging up her jacket and finishing her shift back at Farringdon.

Tyne and Wear Fire and Rescue Service Station Manager Kevin Burns said: “We were delighted to welcome Margaret to Farringdon Community Fire Station as part of her detective day with our colleagues at Northumbria Police.

“She was able to meet some of our firefighters, have a go on the hose and sit in an engine.

“Community engagement is a big part of what we do as a blue light family and we hope we helped add to her fantastic experience and that she enjoyed her day!”

Carole Green, Community Clinical Manager for the Sunderland Learning Disabilities Community Treatment Team at Northumberland, Tyne and Wear NHS Foundation Trust said: “We were delighted to work alongside Northumbria Police to support this unique opportunity for Margaret to work with them for a day.

“It is a hugely generous and kind offer from the police and our service is grateful to them as this is something Margaret has always wanted to do. We can’t wait to hear more from Margaret about her day.”